Why is Germany's most famous contemporary art fair being held in both Kassel and Athens? Documenta director Adam Szymczyk tells DW how location impacts the artistic process - and makes a political statement. 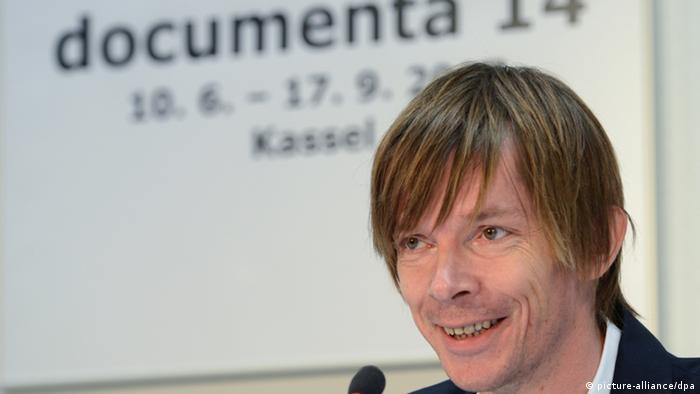 DW: Why did you think it was necessary to have two perspectives on one exhibition? And why did you choose Athens?

Adam Szymczyk: I think we are living in a world that is becoming an increasingly complex place, a difficult place, and maybe it's the moment to abandon a single vantage point from which to see things. Of course Kassel is traditionally the home of Documenta for the last 60 years and offers a beautiful perspective onto the city, onto Germany. But your task as artistic director is to come up with something else and offer a new perspective.

I thought that this doubling of perspective would be really productive in many ways. First of all, it's a kind of displacement of the exhibition, which allows us to generate meanings from a place that traditionally has not at all been considered important. We are not trying to make Athens a destination for contemporary art lovers, but we're trying to think and work from a place that became synonymous with very profound and harsh realities of the social and economic crisis that Greece has been experiencing since at least 2008 - although the roots of this crisis are probably deeper.

Will the two exhibitions be complementary? Do you have to see both?

You can also see it like two takes in jazz. So you try to play a piece once, it's not sufficient. You want to try something else; you play it a second time - a second take. The same artists are invited to make works for Athens first, and then Kassel. So you can see there's a sort of huge struggling orchestra that performs twice in very different concert halls, so to speak. Before the exhibition has begun, one can only speak in metaphors, but I think it is important to see Documenta in both Athens and Kassel.

You mentioned the difficult situation that Greece is facing. How will Documenta reflect this complex situation? How will artists react to it?

The initial move of Documenta to be in Athens and Kassel at the same time is one of displacement. Obviously, dispossession is also a form of displacement: that is, not owning things either because you are not privileged or by voluntarily giving them up. These are some of the thoughts that were accompanying us while we were making this exhibition and talking to artists.

I think the response to the question of how to address the complexity today can only come through a very complex statement by many different individuals. Among them are the artists of Documenta 14, as well as those who participated and will participate in various other parts of Documenta - for instance, "South as a State of Mind," the magazine that we publish. We also have public programs under the name "The Parliament of Bodies," which was initiated in September last year in Athens and will continue in both cities.

Athens is considered the cradle of democracy and European culture. Now it's also the center of the crisis. In which way is Europe part of Documenta this time?

The great thing about working and living in Europe should be the possibility of free passage of people and ideas. This is something that this movement of Documenta between countries and across borders is trying to demonstrate. We are not keen on supporting any idea of supremacy or a nation state. We see the nation state as a very powerful and dangerous concept which can and does in many situation lead to virulent nationalist revivals around the continent and also elsewhere outside of the continent.

In Athens, people say you're exploiting the Greek tragedy and inviting tourists. What do you tell those people?

I don't think we have been exploiting the crisis. We have never said that Athens is interesting because of the crisis, so the clichés that we are profiting off the Greek misery are not justified by the way we conducted ourselves in Athens. We have tried to be extremely responsible and understand both the current politics and the historical condition of Greece. The nature of relations with Germany is very complicated, starting with Greece's formative moment in the beginning of the 19th century, when a major role was played by international superpowers of the time, which designated the Bavarians to take the throne of Greece. Then there were crises throughout the 19th century in Greece that resulted in strange archaeological barters, where the superpowers that were involved economically in Greece profited from the extraction of Greek antiquities.

Is there anything you think will happen by the time everyone leaves after the 100 days of Documenta?

There are at least two ways of looking at it. Materially, we cannot do a lot. Documenta is a relatively well-funded art exhibition in Germany, but it doesn't have the capacity to transform reality through financial means. We can try to initiate some processes and maybe give direction politically on how contemporary culture could play a role in reconstruction, or in protecting democracy.

But I think the second part of Documenta 14, or any project of that kind, is that it leaves certain traces. These traces are the living bodies of people who went through Documenta either as collaborators or opponents. The whole force field created by the fact that Documenta appeared in Athens and made itself a subject of so much discussion, critique, admiration, hate and so forth - this is something that does transform reality.

We will definitely not leave any megalomaniac ruins of an event behind us, because we have not built anything huge that would stay empty. On the contrary, we try to give more life to some places that are struggling with a crisis. We are desperately trying to work with public institutions in Athens in order to show that: A) they are very important, B) they are actually doing and producing something despite the crisis, and C) they are places that one should visit when coming to Athens and just go up and down the rock.

Do you think from now on, Documenta will be more open and go elsewhere?

I think Documenta is a very open format, which has allowed each curator to experiment and bend it fit whichever agenda they wanted to pursue. Okwui Enwezor created five platforms in different places in the world, like Lagos, New Delhi, and Saint Lucia. His fifth platform was the exhibition in Kassel.

Then there have been other venues outside of Kassel, in Cairo, Alexandria, Banff, and, of course, Kabul during the previous edition of Documenta. It was Carolyn Christov-Bakargiev who established this outpost to realize certain aspects of her program, or test certain ideas, or symbolically locate an exhibition in the middle of a place that was torn by the very devastating war.

I think this is not really comparable with what we are trying to achieve here. We have invited 160 contemporary artists to create new works in Athens and in Kassel. This has not happened before at Documenta and I think it will not happen at Documenta again, if I may say so. It's not that I have a patent for this project but I think to repeat it would be unreasonable. There will be another way of thinking about the exhibition when this edition is over.