In 2017, both Kassel and Athens will host the prestigious art Show, documenta 14. A kick-off in Greece has already caused a stir by featuring art in a politically controversial venue and touching on sexual identity. 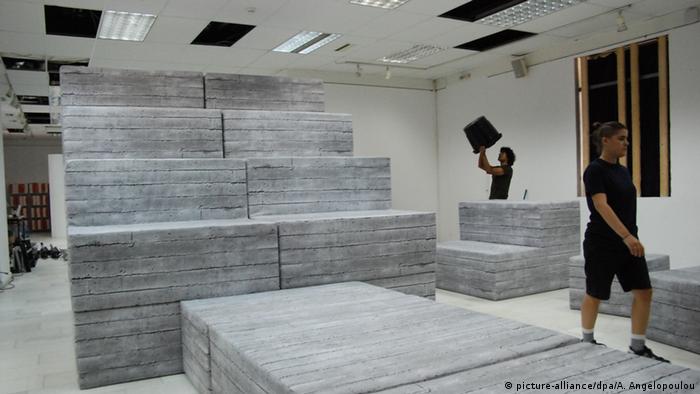 The next edition of the documenta art exhibition takes place in Kassel as usual - but for the first time in the art show's history, there will be an additional program in Athens in 2017, too.

Ahead of the major international event next year, this week the "Parliament of Bodies" public program launched at the first documenta 14 art exhibition venue in the Greek capital with a 10-day line-up entitled "34 exercises of freedom."

The venue alone has sparked controversy. Many Greeks find it quite offensive, since the Athens Municipality Arts Center served as the headquarters of the military police during the dictatorship years from 1967 to 1974.

For "Parliament of Bodies," architect Andreas Angelidakis set up 68 massive blocks made of a light-weight plastic material that visitors are free to assemble and re-arrange as they wish, "creating multiple and transient architectures."

People are "invited to actively construct this political theater every day, interrogating location, hierarchy, visibility, scale," according to documenta 14.

The organizers invited 45 participants to "exercise freedom" within the building, and enter into a dialogue with the public.

Gay, transsexual issues at the fore

"Progressively during this 10-day dialogue," documenta 14 has said they plan to introduce "contemporary languages of resistance" from the Kurdish revolution to the queer, transgender, sex-workers, and migrant voices in Turkey, Greece, Mexico, or Brazil, from contemporary indigenous fights for restitution to new political and artistic practices.

The documenta team, which expects the outcome to be a "different political and poetic map of Europe than the one designed by the European Union," admits that reaction to the concept has been strong.

Previously, some critics compared adding Athens to the program as a move to poverty tourism.

Greece split over documenta in Athens

In an interview in October 2105 with the online "Spike" art magazine, Greek Finance Minister Yanis Varoufakis voiced his displeasure with the "idea that part of documenta will take place in Athens - it is like crisis tourism."

Varoufakis called it a "gimmick" to exploit the tragedy in Greece - like "rich Americans taking a tour in a poor African country."

But Athens Mayor Giorgios Kaminis welcomes the art show as "a gift to the Greek capital" that will turn Athens into a contemporary cultural destination.

Manifesta: Where an art expert and a plumber can discuss 'filtering art'

The German artist Christian Jankowski is the director of this edition of the contemporary art biennial Manifesta, held this year in Zurich. He tells DW why the arts need to get in touch with the rest of the world. (13.06.2016)

As Greece and the EU negotiate a way out of debt crisis, Germany's largest exhibition of contemporary art is planning a show in Athens for 2017. Director Adam Szymczyk tells DW why Greece is a good choice for the event. (22.07.2015)