The unrest in Libya, Africa's third-largest oil producer, has had no significant impact so far on oil supply in Europe, but the disruption to oil production underlines the need for diversification of energy sources. 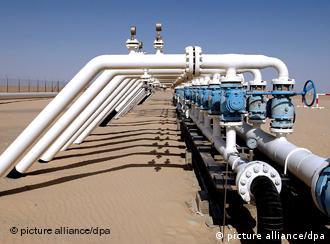 85% of Libya's oil is for export, mostly to Europe

As Libya's oil production is cut in half due to the political unrest in the North African country, the EU said on Monday that oil supplies to Europe were barely affected, not least because Saudi Arabia said it would make up the shortfall.

"Also, we know that OPEC member states and other partners, like Russia, are keen to avoid supply problems in Europe."

About half of Libya's crude oil output of 1.6 million barrels per day has been cut, according to the latest data by the International Energy Agency (IEA). Libya is a member of the oil cartel OPEC and is the world's 12th-largest oil exporter.

The EU believes that most of the country's oilfields are no longer under Moammar Ghadafi's control, but in the hands of the opposition. 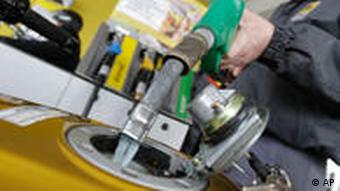 Europe's drivers are feeling the impact at the pumps

The unrest in Libya and other countries in the region highlights the need for alternative energy sources and a coordinated energy policy in Europe.

Last week, oil prices shot up to $120 (87 euros) a barrel for the first time since 2008. When Saudi Arabia, the world's largest oil producer, announced it would step into the breach prices came down, but traders remain on edge.

As Libya exports most of its oil to Europe and accounts for around 10 percent of European oil imports, the impact has been felt at petrol stations across the continent. Germany's largest automobile club, the ADAC, recorded average prices of 1.50 euros for a liter of petrol and 1.38 for diesel.

But the situation in Libya is not the only reason oil prices are rising.

"We know that the global economy has picked up and we know how the euro dollar exchange rate has developed, so there are various reasons why the oil price has gone up," Germany's deputy Economics Minister, Jochen Homann said on Monday, adding that the EU's policy is to focus on alternative energies to wean itself off fossil fuels like those based on crude oil. 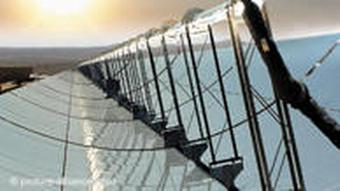 Renewable energies are the way forward in the EU

Meanwhile, Homann's Austrian colleague, Economics Minister Reinhold Mitterlehner is a lot more worried, if prices head in the direction of $130 to $150 dollars a barrel.

"That would no doubt stoke fears of another recession. That's why we need clarity on the political situation in the Maghreb countries as soon as possible," he said.

Libya's oil industry is not affected by the latest EU sanctions, mainly because it is already largely in the hands of the opposition.

"If we considered banning imports [from Libya] now, that would send out the wrong signal and punish those that are already on the right path," Günther Oettinger said.

Whatever the developments in Libya, when it comes to energy policy, EU member states know that a coordinated effort needs to come sooner rather than later.

At their first energy summit in Brussels at the beginning of February, EU energy ministers agreed on the need to reduce dependence on energy imports and boost spending on renewable energies. Markets are set to be liberalized and infrastructure coordinated across the bloc.

"We want to diversify [energy supply], both in terms of the sources and the routes they take," Mitterlehner said.

"And that's, of course, not something that can be done in a day, but it's the right thing to do."

Germany has increased the content of biofuel in its gasoline from five to 10 percent. E10 will save some carbon emissions, but many consumers remain suspicious of the fuel's impact on their vehicles. (28.02.2011)