No longer a failed state, though struggling to rise from the ashes. Mohamed Omer Arteh, Somalia's Deputy Prime Minister, is Michel Friedman's guest on Conflict Zone this week.

Somalia's current political and security crisis is no longer just affecting its own population. After a civil war that lasted for 25 years, the domestic failure to deal with the al Qaeda-linked militant group al-Shabab is spreading to neighboring states like Kenya and Ethiopia.

Mohamed Omer Arteh, Somali Deputy Prime Minister, acknowledged the problem but refused to take the responsibility for his government's shortcomings in an exclusive DW interview: "[There's] an instability in the whole region simply because for a very long time, there hasn’t been a proper intervention that was done by the international community, leaving Somalis alone to solve all these problems."

Missed opportunities in the fight against terrorism

The Dadaab camp in Kenya is the world's largest refugee camp just 90 km from the Somali border. Kenyan authorities have announced plans to close Dadaab citing an increasing terrorist threat. Where will the camp’s 350,000 inhabitants—many of them refugees go? Can Somalia cope with this massive influx? "They are Somalis, and they have every right to return back to their homes. And this is something that we as a government have to abide by, " Arteh told Conflict Zone. 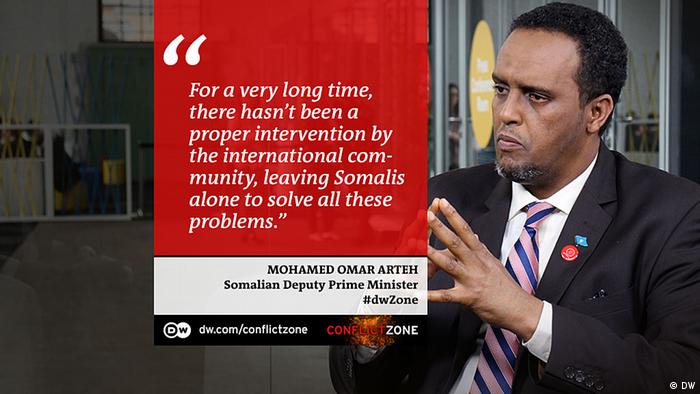 Out of a population of 10 million, two million Somalis were already forced to flee their homes. Half of them was displaced within Somalia, another million left the country and is scattered around the region. Most fled because of fighting in Somalia. Formed in 2004, the Islamist group al-Shabab, seeks to create an Islamic state in Somalia and has waged an insurgency against the transitional governments there. Tensions between terrorist and government forces have increased since 2009.

A breeding ground for extremism?

Mr. Arteh himself came dangerously close to terrorism in February 2015, when an al-Shabab attack wounded him at the Central Hotel in Mogadishu. Somalia’s Council of Ministers has been seeking to counter radicalization and then root out extremism.

But Somalia isn't in this alone: Some 22,000 African Union peacekeepers (AMISOM) support the government in its effort to stabilize the country and to deliver humanitarian aid. They are however struggling to protect its population from the deadly threat by Al-Shabaab.

98 percent of girls subjected to FGM

Despite Female Genital Mutilation (FGM) being officially forbidden in the constitution, the practice of removing female genitalia remains widespread in Somalia, performed on 98 percent of girls according to UNICEF, some as young as four. Arteh called these numbers "unacceptable" but underlined how hard it is to change how people in Somalia think about the procedure as it's so deeply rooted within the population. When DW's Michel Friedman confronted him with the lack of governmental enforcement on this matter, Arteh said: "The bill is in the parliament. And it’s going to be passed."

Although officially no longer a "failed state," Somalia has been ranked the world's most corrupt country by Transparency International. The country's own auditor general, Nur Jumale Farah, told Reuters "there are malpractices in the financial sector of most ministries”. That is despite billions of dollars poured into Somalia from donors - not just to equip the army but also to rebuild a functioning state that had been destroyed in decades of war.


Aiming for the first elections after 25 years of civil war, Somalia is now taking further steps towards becoming a rebuilt state this August. But it is unclear who will get to vote. Under one model, tribal elders would select some 14,000 representatives for the population to elect 275 members of parliament. That has come in for harsh criticism and it remains unclear if the vote will go ahead.

Why is it taking so long for Arteh's government to stabilize the country?

The recent refugee crisis in the Arab world and Europe has taken the spotlight off sub-Saharan Africa. But a new report by UNHCR reveals that the situation in Africa in 2015 was also grim. Here is a graphical overview. (20.06.2016)

AU in Somalia: underfunded and overwhelmed

AMISOM, the African Union mission in Somalia, claims to have successfully repulsed an attack by al-Shabab militants on one its military bases. Its ability to protect and support the Somali government is limited. (10.06.2016)