Disappointed by Austria, migrants go home | Europe | News and current affairs from around the continent | DW | 03.02.2016

Missing their families, frustrated by difficulties and fed up with living in stadiums with hundreds of others, migrants are leaving Austria in record numbers and returning home. Alison Langley reports from Vienna. 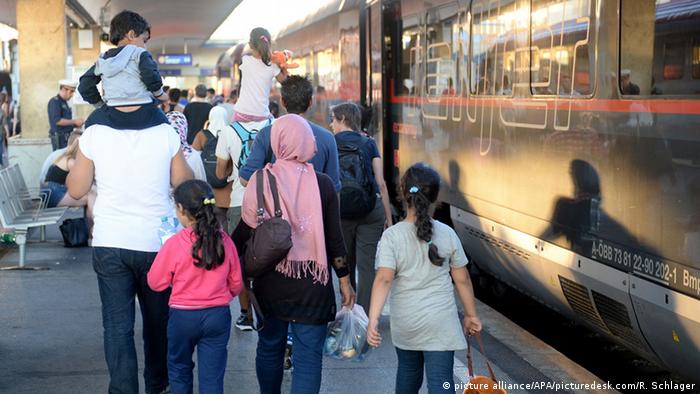 Mohammed* broke down in tears when he heard a 14-year old boy in a wheelchair talk about his mother. The boy, a Kurd, said in near-perfect German that he and his father had arrived in Austria for medical help a year ago.

They have received subsidiary protection - a kind of asylum that allows them to stay one year, with the possibility to extend - but his mother is not allowed to join them. He and his father had just arrived at Verein Menschenrechte - a local human rights group - to see if workers there could help. The boy said he missed his mother; and that is when Mohammed, 22, listening in, began to weep.

"My mother is sick," he said simply. She misses him. She cries each time they speak via Skype. Her blood pressure has skyrocketed. She worries about her son. Mohammed said he came to Austria to start a new life and make her proud.

Instead, he's flying back to Iraq, with a new jacket and crushed dreams. And he is not alone. A record number of migrants are voluntarily leaving Austria, impatient with living in limbo - unable to work, to learn German, to live a normal life - and missing their families.

In January, the group assisted 347 people, mostly men from Iraq, to leave the country, said Gunter Ecker, director of the Verein. In 2015, they helped about 2,500 people fly home; Ecker expects that number to nearly double this year. The Verein works with the International Organization for Migration to arrange travel papers and flights.

And that is just fine with Austria's Interior Minister, Johanna Mikl-Leitner, who has said she wanted to make Austria unattractive to migrants. Her goal is to send back at least 50,000 migrants over the next three years.

Overwhelmed with last year's influx of migrants, the center-conservative interior minister has been criticized for being slow in arranging proper housing for the newcomers. Tents erected in Linz last March generated headlines at the time because Austrians wondered whether a nation as rich as theirs couldn't treat migrants humanely.

A cadre of volunteers stepped in to greet migrants when the country's leaders did not. They spent their summer passing out food, clothing and shelter along with warm smiles to make the new arrivals feel welcome. Charities like Caritas and Diakonie organized the volunteers and gathered donations. Some families opened their homes to the migrants. Word spread that they were welcome. 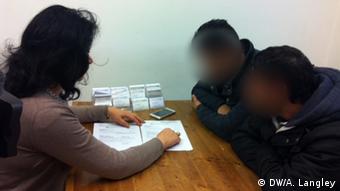 Last summer Mohammed left Turkey, where he had been working for the last 18 months, and came to Austria. His goal was to go to university and study engineering. He had left Baghdad to find work to support his family, but really he wanted a better life than was possible with the piecemeal jobs he could pick up.

He paid smugglers more than 4,000 euros ($4,370) to get to Austria six months ago. It was a slog, but he thought it would be worth it. After spending a few months at the intake center, which has been criticized by human rights groups like Amnesty International for its overcrowded, inhumane conditions, Mohammed was sent to Poysdorf, in Lower Austria, where he lived in a group home until recently.

The people were nice there, he said, but he was bored. Twice a week volunteers came to teach the residents German. Other than that, he said, he was left to his own thoughts. No work; no school; no money. And his mother, crying on the end of the Internet connection. The Verein helped arrange a flight back to Baghdad; he was due to fly out this week.

He was lucky, commented two men who had just arrived at the Verein without an appointment. They didn't want to give their names because they worried that complaining about the conditions at Dusika Stadium, where they are living, might hurt their chances of staying in Austria.

They've been at the stadium on the outskirts of Vienna for four months. There is only one working bathroom; the rest had been locked one after another as they broke down. The food is bad, they receive no language instruction and have no privacy.

The 40 euros per month pocket money that each asylum-seeker is supposed to receive hasn't arrived. The men said they asked for it but are always told they will get it "tomorrow." So their parents send them money from Iran. They want the money to buy public transportation tickets so they can get into town legally, they said.

Schara Magied, a human rights adviser who has been working at the Verein since it was founded in 2004, said mornings the office fills up quickly with people wanting to know their rights. Some are fed up and want to leave. Others, like the two Iranians, are prepared to stick it out - for now.

They don't want to leave because they fear reprisal if they go back to Tehran, they said. 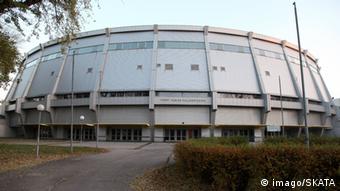 Hundreds of migrants are being housed in Dusika Stadium

Farhad* doesn't care anymore. He's going back to Iran. Last December, after paying various smugglers a total of 4,750 euros along the Balkan migrant route, he says he was turned back at the German border, but he doesn't know why. It was New Year's Eve, he had hoped to spend the evening celebrating a new start to a new life in a new country. Instead, he was told to spend the night in a Red Cross tent at the border.

Farhad didn't want to wait, though, so we hoofed it to Salzburg, where he tried a few days later for the second time to cross into Germany. This time it was late at night. He was picked up by patrols and send to another tent for the night. He said no one told him he could have requested asylum in Austria - only that he had broken the law and would be arrested the next day.

In the middle of the night, Farhad says, three men in police or possibly security uniforms - one of them smelling of alcohol - beat him up. Farhad speaks no German and only rudimentary English but he believed the men yelled at him to leave.

"I thought only the Iranian police did that," he says through an interpreter.

Irene Stauffer, a spokeswoman for the Salzburg police, said she had no record of any abuse in the months Salzburg has been helping with refugees. She added that Red Cross workers are on hand and would have noticed if a vulnerable person was in need of help.

The young man says he fled after the men left. Eventually he made his way to Vienna, but with no papers, he has no rights. He has never requested asylum in Austria. Homeless, he has been sleeping in a shelter run by Caritas, which also provides him with a meal of soup each night. He smells; he hasn't taken a shower for weeks. Now, he wants only to go back to Iran.

"I had imagined a different life," he said.