UK premier Theresa May is reported to have told her Cabinet that a change to her Brexit plan was not possible, after consulting with German Chancellor Angela Merkel. The two leaders have met twice in the past week. When Theresa May presented her government summary for Brexit at Chequers last Friday, she is reported to have told her Cabinet ministers: "No, that's not possible, because I've already cleared it [the existing text] with Mrs. Merkel," according to the right-leaning The Spectator political magazine.

Allegations of German influence over the British exit from the European Union have been made by politicians wanting a complete break with Europe, and in parts of the British media.

Chancellor Merkel's position on Brexit has been consistent: Negotiations are a matter for EU officials, not individual member states.

The two leaders have met twice since July 5.

One day before presenting a summary of her Brexit proposals to her government ministers, May went to Berlin to meet the Chancellor.

On Monday, July 10, Merkel attended a Balkans summit in London, followed by a reception in the gardens of St James's Palace with May. 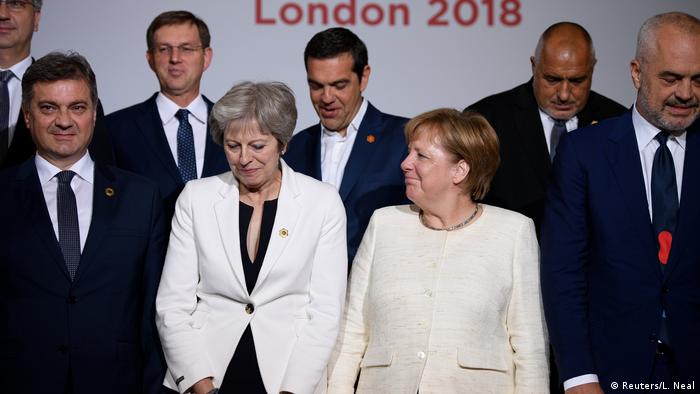 An apparently high level of sensitivity was raised by journalists including British newspaper The Guardian's Patrick Wintour, who wrote: "At Balkans summit Angela Merkel raised her eyebrows and gave out a thin smile when told by Theresa May she was not to answer questions from the British press, and only take a solitary question from a German reporter. One summit issue was media freedom in the Balkans."

Speaking after the Balkans meeting at a press conference alongside May, Merkel said the Brexit process had been advanced: "With Britain putting forward a white paper, this has come a whole step forward, and we as 27 ... will form a position and give a joint response. But it's good that the proposals are on the table — that much I can say already without going into details," Merkel said.

"We will remain Europeans even if we're not in the same European Union," Merkel said.

The political drama playing out in Britain has intensified in the last week with the resignations of government ministers and others, including Brexit Minister David Davis and Foreign Minister Boris Johnson.

May was quoted in one of the pro-Brexit newspapers, The Sun, after her office denied The Spectator's claims of clearance for the Brexit blueprint from Merkel.

"For the first time in decades we will have control of our borders," May told The Sun on Wednesday. "Only our Brexit deal for Britain truly respects the will of the British people. It is the Brexit this country demanded. And, as Prime Minister, it is the Brexit I am determined to deliver."

On Thursday, the government produced its long-awaited blueprint for relations with the EU in a 98-page white paper. Most of the plan was already known: a free trade area for goods, retaining close ties with the bloc and participating in its agencies for chemicals, aviation and medicines.

However, the government gave up plans for close trading ties for financial services, instead proposing flexibility but limited market access.

Freedom of movement would end, but Britain would try to ensure that tourists and short-term business visitors from Europe could enter without visas.

Other issues, such as the border between Northern Ireland and the Republic of Ireland, remained unclear.

EU negotiators, and German politicians commenting on the process, have kept to the same line "that the EU internal market is indivisible and there can't be any cherry-picking," as Florian Hahn, a Christian Social Union (CSU) lawmaker in Bavaria said on Monday.

For the Social Democrats (SDP), Merkel's coalition partner, parliamentarian Achim Post said there was still more work to be done before the UK reached a deal: "We're still far removed from a breakthrough in talks with the EU," Post said.

UK Prime Minister Theresa May has appointed a Euroskeptic junior housing minister, Dominic Raab, as Britain's new Brexit Secretary. The 44-year old Raab was a prominent Leave campaigner ahead of the Brexit vote in 2016. (09.07.2018)