North Korea isn't known for its art. Most images there either extol the government or criticize its enemies. But one North Korean defector is coming to grips with his past and using his canvases as a political stage. 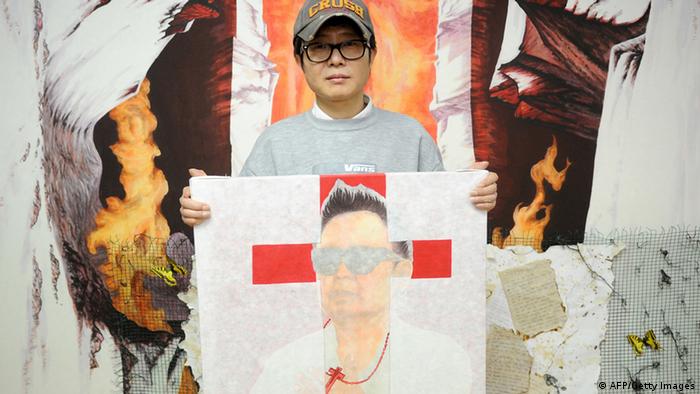 Song Byeok has a small studio on the second floor of a warehouse in Seoul. The 42-year-old says it is where he goes to research and read and gets inspiration for his art.

Song Byeok is not his real name, though. He says his nom de plume is a part of his new life, one that started when he defected to South Korea from North Korea a decade ago.

His past is the largest influence in his art. And it has created a lot of buzz around his name. His work has appeared in galleries in Seoul, Atlanta and Washington, DC, USA.

His paintings are bright and vivid. Many are symbolic - one is of a woman in a red dress, hanging onto a police officer's leg. Another shows a man staring out from behind a shattered blue, red and white North Korean flag. Others contain slogans in Korean, such as freedom and human rights.

But there's one painting that got him the most attention. It's what you might call a unique portrait: From the neck down, it's Marilyn Monroe from The Seven Year Itch. But on top of the body is the pudgy face of the late North Korean ruler Kim Jong Il.

"I had no idea that people would love this painting so much," Byeok says. "I just wanted to show that Kim Jong Il is only a human being. North Korean people seem to live on another planet because they're kept isolated by the government. I wanted to say that we are living in a globalized society and I think Marilyn Monroe is a good symbol of that."

Making fun of the North Korea's "Dear Leader" is taboo in his home country. Byeok says he would have received an automatic death sentence had he created the painting back home.

Before Song Byeok defected to the south, he was conscripted to create propaganda art for the North Korean government. He made posters with revolutionary slogans, with red flags waving in the background.

He says he was proud to create that kind of art. He thought he was doing the work of his leaders, who he thought were like gods.

But that all changed when North Korea fell into famine in the 1990s.

"My father and I crossed the Tumen River into China to find food," he recalls. "But when we tried to cross back over, the river had flooded. My father was suddenly swept away. I called out for help, but instead, the North Korean border guards arrested me and put me in prison. That's when I realized there was something wrong with this system." 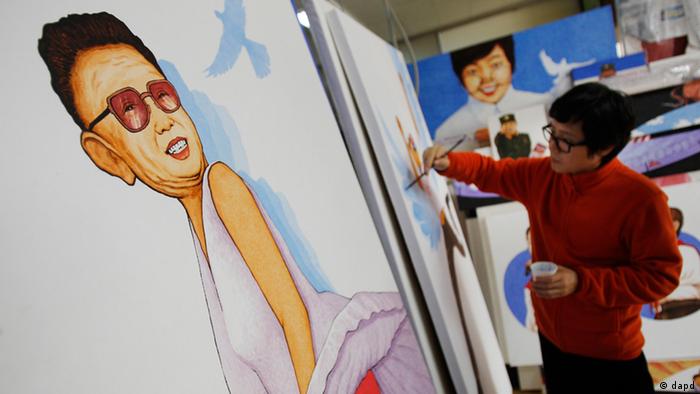 His painting of Kim as Marilyn made Song Byeok famous

During 4 months in a labor camp, Song Byeok watched people die around him. He even lost most of his right index finger because of a bad infection. It took him awhile to re-learn how to use a paintbrush.

In 2002, he fled to China again, but this time made it all the way to South Korea. There he went to Hongik University, one of the nation's top art schools, where teachers welcomed his style of painting - what some call socialist realism.

Byeok's first exhibition in 2011 was a huge success. Though some of his professors and classmates had advised him not to show certain pieces, such as the Kim-Marilyn one, "But I didn't listen and did it anyway." It got him a lot of media coverage and he was dubbed the anti-North Korea artist.

Song Byeok says he now feels what real freedom is like and by critiquing his former leaders it helps him come to grips with his earlier life. But he doesn't want to only be known as the anti-North Korean artist.

And he is looking for new motifs. Despite the fact that the North Korean dictator Kim Jong Il didn't respect his people while alive, Byeok says he'll show some respect for his former leader now that he's dead.

"In the end, Kim Jong Il proved to be like any other human. I will honor his death and will no longer paint any pictures of him. There's no need to parody him anymore."

Under its new leader, many wonder whether Pyongyang will make an attempt at improving relations with Seoul. But after the arrest of a senior citizen who travelled north illegally, relations remain tense. (13.07.2012)