The president of the German football association has criticized changes to the implementation of the VAR-rules used in the Bundesliga. Many have expressed frustration over the use of video assistants in the league. 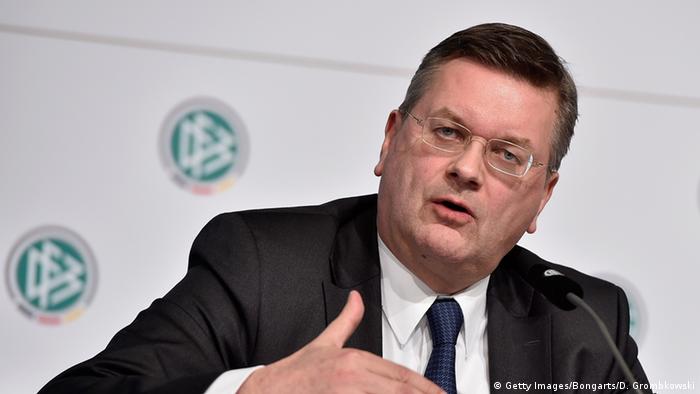 The president of the German football association (DFB), Reinhard Grindel, told public broadcaster NDR Info on Friday that he had not been informed about a letter reportedly sent to Bundesliga clubs by the DFB prior to Matchday 10.

According to German football publication kicker the letter sent to the clubs on October 25 increases the scope for video assistant referees (VAR) to get involved in the officiating of matches. Under the original rule, the VARs were only to contact a match referee in four different scenarios and only when a "clearly wrong call" had been made. But the letter, which kicker says it has a copy of, says that VARs should now get involved even in cases in which they are not absolutely sure that a call was wrong.

"This letter was not cleared by me and I am not happy about it," Grindel told NDR Info. He also made clear that he didn't approve of this new interpretation of the VAR rules, reiterating that the video assistants should only get involved when it is absolutely clear that the referee on the pitch made a mistake. He added that it should be the referee on the pitch who has the last word and that the video assistants should not function as supervising referees.

According to the kicker report, the DFB began implementing what is described in the letter as a "course correction" following Matchday 5 in mid-September, but chose not to inform the clubs until weeks later. Just why this was the case remains unclear.

Grindel said he intended to meet with the head of referees, Lutz Michael Fröhlich, to discuss the matter. There has been no further comment from the DFB.

The use of video assistants, which was introduced at the start of this season, has been a major bone of contention, with some coaches and many fans complaining that it has often caused too many interruptions in matches and that it is often taking too long for decisions to be made.