Deutsche Post has denied selling personal data to political parties, insisting that it follows data protection laws. The Bild newspaper had made the claims on Sunday, implicating two major parties: the CDU and the FDP. 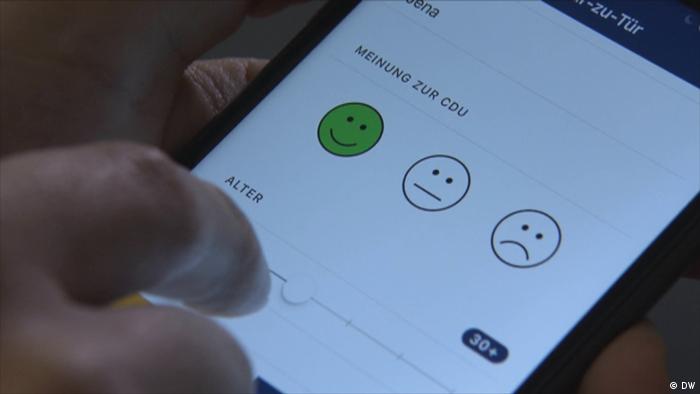 CDU politicians used an app for their door-to-door campaigning

The Deutsche Post subsidiary Deutsche Post Direkt has rejected claims that it "flogged" client microtargeting data to clients, including German political parties such as the Christian Democrats (CDU) and the Free Democrats (FDP).

The Bild am Sonntag newspaper reported that the two parties had bought "more than a billion" details of personal data about potential voters from the subsidiary, which offers targeted-mailing concepts to its clients.

Deutsche Post insists that it never sells details of addresses or individual households, and that the data it offers to clients — which it calls microcells — is  based on "a standard of 6.6 households" to work out "statistical probabilities." The company stresses that it adheres to Germany's strict data protection laws.

Bild reported that Deutsche Post had been selling voter data to political parties since 2005 and that the CDU and the FDP had spent "five-figure sums" to acquire such data in the run-up to the German national elections last September.

The CDU confirmed that it bought data from Deutsche Post to help with door-to-door campaigning. The data was completely anonymized, the party claimed in a statement, insisting that "all of the CDU's digital activities are subject to the relevant data protection regulations."

Read more: Opinion: Germany should not look to the US for campaign tips

The FDP chimed in, claiming that it only used anonymized data in its election campaign. The FDP politician Marco Buschmann said on Facebook that the data the party bought from Deutsche Post "merely indicates a probability where we might find a voter leaning towards the FDP."

The practice of buying data to customize election campaigns is not new, but the practice of microtargeting, in which data is mined to target individuals, is restricted in Germany due to strict EU privacy regulations.

Parties have, however, targeted certain groups; the CDU's conservative sister party, the CSU, has reached out to the mostly conservative Russian community in Germany and the FDP tried to appeal to voters who use Netflix with a special ad campaign.

Following the data scandal involving Facebook and UK firm Cambridge Analytica, Hamburg's data protection officer, Johannes Caspar, said the "use of microtargeting for election campaign purposes, both offline and online" had to be re-evaluated as political parties "are surely not meant to manipulate voters" by intransparent means.

A history of Germany's coalition governments

Only once has federal Germany been ruled by a single party with a parliamentary majority. Coalitions are therefore the norm. DW looks at the various governing combinations that have presided in the Bundestag. (15.12.2017)