Deterrence in Eastern Europe top of the agenda at NATO meeting

NATO defense ministers have met for a two-day meeting in Brussels. Talks are expected to focus on NATO countries increasing forward presence in Eastern Europe with the hope of countering the perceived threat from Russia. 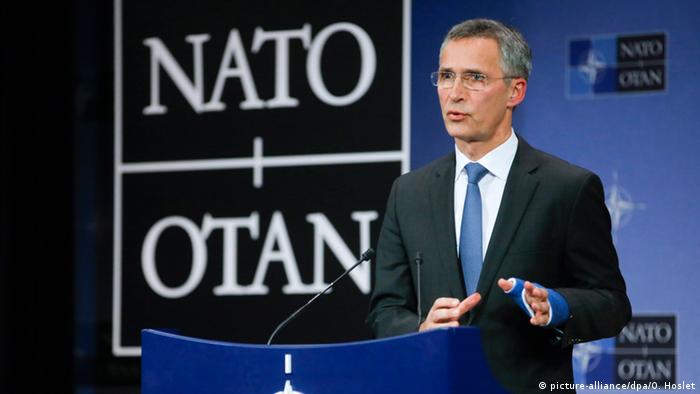 Speaking ahead of Wednesday's meeting in the Belgian capital, NATO Secretary General Jens Stoltenberg said the aim over the next two days was to "make decisions to strengthen our defence and deterrence."

"I expect the defense ministers to agree to enhance our forward presence in the eastern part of our alliance," Stoltenberg said, adding that the multinational force presence would "send a strong signal of NATO's unity to any potential aggressor."

Described by NATO as a "modern deterrence," the alliance's plans could see the deployment of some 6,000 troops on rotation across countries such as Poland and the Baltic states, which have felt threatened since Russia annexed Crimea in 2014.

Some of NATO's 28 member states are reluctant to support the plan, however, arguing that the large-scale deployment would see a return to a Cold War stand-off with Russia.

Stoltenberg has repeatedly denied the claims, insisting that small forces on the ground, acting as a tripwire, would suffice in deterring aggression from Moscow.

The proposals are expected to be formally endorsed in July at a summit in Poland.

The UK was also expected on Wednesday to announce plans to double its NATO naval deployments in 2016, with a particular focus on the Baltic region.

In a statement to the Ministry of Defence (MoD) British Defense Secretary Michael Fallon said that "increasing our NATO deployments sends a strong message to our enemies that we are ready to respond to any threat, and defend our allies."

"2016 will see a particular focus on the Baltic region with our ships sent there as part of the maritime group, the mine countermeasure group and the Baltops exercise," Fallon added.

Also on the agenda at the two-day meeting are requests from Germany and Turkey for help in slowing the influx of migrants into Europe by sea. Stoltenburg said talks could potentially lead to a decision over the use of NATO air or sea resources to help combat people smuggling.

"I think we will take very seriously the request from Turkey and other allies to look into what NATO can do to help them cope and deal with the crisis and all the challenges they face, not least in Turkey, " he added.

NATO member states have continued to cut back on defense spending, but at a slower rate, said NATO's Stoltenberg. His statement comes as the 28-nation alliance mulls a US request for AWACS surveillance aircraft. (28.01.2016)