Delhi election losses: The beginning of the end for PM Modi? 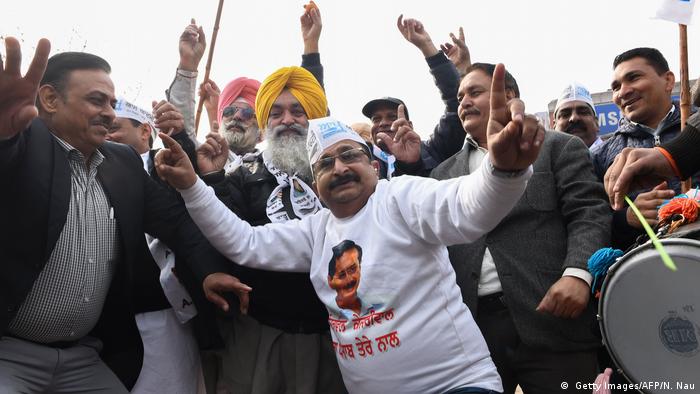 According to official results, the AAP secured 62 of the 70 seats, while Modi's BJP managed to win just 8 seats, and the Indian National Congress drew zero. Chief Minister Arvind Kejriwal, who launched the AAP in 2012, is set to continue his post.

During its election campaign, the AAP focused on combating graft in India's political system. The party also drew attention to its earlier efforts to improve public schools and health care. The AAP came to position itself as a party with pro-poor, pro-welfare policies. Tuesday's results showed that the AAP's message has struck a chord with New Delhi voters.

Some believe that voters turned to the AAP because they feel the BJP has exploited India's fault lines, exacerbating tensions between Muslims and Hindus.

Critics say much of the BJP's campaign has sought to divide on the basis of religion in the hopes of consolidating Hindu voters — a tactic that has worked for the party in other states. In 2019, the BJP secured a vast majority in Parliament during the general elections.

"Delhi has protected the soul of India," Pawan Verma of the Congress party told DW. "It has exposed the machinations of the, BJP and now people will see through the divisive agenda of the party."

For BJP members, Delhi's election is a test of Modi's popularity after months of sometimes violent protests against a citizenship law that passed in December.

Delhi has been at the center of protests against the Citizenship Amendment Act. Shaheen Bagh, a predominantly Muslim middle-class locality in the city, has been the epicenter of Delhi's protests, inspiring protests across India. At least 40 people have died in the protests.

The citizenship bill was widely viewed as discriminatory against Muslims, who make up nearly 15% of India's population of 1.3 billion. Muslims feared that the law could be used in combination with the proposed National Register of Citizens to harass and disenfranchise them. Critics say the citizenship law, which fast-tracks citizenship for non-Muslims from three neighboring countries, goes against the country's secular constitution.

"This result in Delhi is not a referendum on the citizenship law," the BJP's Seshadri Chari told DW. "It will be carried out. We lost because of the local issues in the campaign."

Some political analysts believe that the BJP began deploying methods to mobilize hard-line supporters when it sensed the potential for success evaporating. Analysts say the tactics included boosting Hindu nationalism and anti-Pakistan rhetoric.

Yogi Adityanath, the chief minister of the state of Uttar Pradesh chief minister and a Hindu nationalist, stated during his campaign that, though the government fed "bullets to traitors," the AAP's Kejriwal treated them to "biryani," a mixed rice dish.

During his campaign, the BJP member of Parliament Anurag Thakur referred to people who protested the citizenship amendment as the "country's traitors," prompting crowds to chant back "shoot them."

In June 2019, a US State Department report on international religious freedom documented cases of religiously motivated killings in India, as well as discrimination, vandalism and restrictions on practicing religious beliefs.

"The ideologues of the BJP are not interested in winning Delhi but in cementing the core Hindu vote and then similarly across India to launch its Hindu nation project," the political analyst Meghnad Desai said.

The Delhi elections are likely to further damage Modi following a slew of electoral losses in the states of Haryana, Maharashtra and Jharkhand.

Political analysts believe that the high-profile Delhi verdict could be a wake-up call for the BJP to reassess its strategy in light of the upcoming assembly elections in Bihar and West Bengal.

"It was the dirtiest election campaign ever witnessed in India's electoral history" the political analyst Sudheendra Kulkarni told DW. "It was toxic, and I hope there is some introspection in the BJP."

Prime Minister Narendra Modi's reelection has alarmed many Indian Muslims, who believe that their political interests will continue to be undermined by the Hindu nationalist politician. Faisal Fareed reports. (28.05.2019)

The prime minister's BJP is on course to score a spectacular victory in India's general election. If the lead holds, it would be the first time a party has won back-to-back majorities in Parliament since 1984. (23.05.2019)