Why the AAP's Delhi win matters

Indian PM Narendra Modi suffered his first state election defeat since sweeping to power, as the Aam Aadmi Party won a smashing majority in New Delhi. DW speaks to Michael Kugelman about the political impact of the vote. 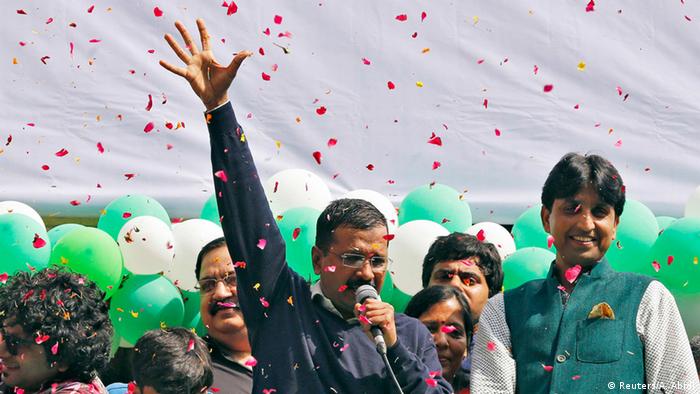 The upstart anti-establishment "Common Man Party" or AAP dealt a heavy blow to Modi's Bharatiya Janata Party (BJP) as it was set to capture more than nine-tenths of the seats in the capital, New Dehli, in a state election viewed by many as the first real test for the PM since winning last summer's general election.

On Tuesday, February 10, tallies showed the AAP won or was leading in 66 seats in the 70-seat state assembly, while the BJP was leading on just three. Over 13 million people were eligible to vote. A record 67.14 percent turnout was recorded in the polls held on Saturday, February 7.

AAP leader Arvind Kejriwal had already been Delhi's chief minister in 2014, but resigned after just 49 days in office after opposition politicians blocked a bill that would have created an independent body with the power to investigate politicians and civil servants suspected of corruption.

Kugelman:'This is a clear and unadulterated setback for Modi and his party'

In a DW interview, Michael Kugelman, a South Asia expert at the Washington-based Woodrow Wilson Center for Scholars, speaks about the impact the latest state elections are likely to have on national politics, arguing that there will now be increased pressure on the ruling BJP to win seats in subsequent state elections to realize its ambitious economic reform agenda.

DW: What does this electoral defeat mean for Modi and the BJP?

Michael Kugelman: This is a clear and unadulterated setback for Modi and his party. Ever since Modi became prime minister, he could seemingly do no wrong, and enjoyed much adoring press coverage both in India and abroad. He announced bold new policies to repair the economy, and he scored meetings with the leaders of the world's most popular countries. Perhaps most importantly, in October, his party won two state elections in regions - Maharashtra and Haryana - not known for being BJP strongholds.

Anti-corruption party AAP has swept Delhi elections after its leaders won most of the seats in the state assembly. Prime Minister Modi's party has suffered a crushing defeat. (10.02.2015)

The media hype around Indian PM Modi is usually immense, as was apparent during US President Obama's India visit. But communications expert Shakuntala Banaji says it camouflages the South Asian country's real issues. (28.01.2015)

In effect, the BJP has tried to parlay the momentum from its landslide national election victory into even more gains across the country. And now comes the party's defeat in Delhi - and at the hands of a party that is barely two years old. In light of this defeat, there will be less of a mood for talk about the so-called Modi "mania" and "magic" that has appeared in headlines ever since Modi surged to victory in last year's national election.

The BJP will try to downplay its poor showing in this Delhi election, but there is no sugarcoating the fact that this is a very significant defeat for a party that had been riding high for nearly a year.

What were the decisive issues in this election?

The same bread-and-butter issues - corruption, water supply, energy, law and order - that dominated the previous New Delhi state election. I think that Kejriwal's victory is an indication that voter dissatisfaction about these basic issues remains deep, despite Modi's promises to make everything better. And especially in Delhi, a city where natural resource constraints, corruption, and crime remain critical challenges.

How did the AAP manage to win Dehli yet again despite Modi's nationwide popularity?

The major reason is that the issues the AAP has long touted continue to be issues of critical importance for New Delhi's residents. And many voters saw Kejriwal making progress on these fronts during the few weeks he served as chief minister the last time around. But there is something deeper at play here.

It is worth remembering that Kejriwal eventually apologized for resigning his chief ministership back on February 7, 2014. For all the earlier talk of his resignation being a sign of immaturity, this apology - a rarity in India politics - was likely seen as a sign of political maturity. 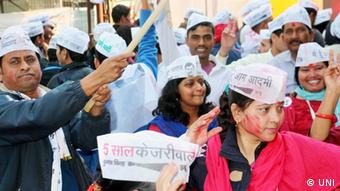 Many voters saw Kejriwal making progress on key issues such as corruption, energy as well as law and order during his few weeks as chief minister

This was probably on the minds of Delhi voters on February - as was the fact that the issues Kejriwal has long advocated for remain extremely salient in Delhi. This all helps explain how he was able to win this election.

Why do the Delhi election results matter for the whole of India?

They are important because the AAP shattered the veneer of political invincibility that the BJP had enjoyed to this point. It is also important because it shows a remarkable degree of resilience for Kejriwal, a man derided by many in India after resigning his chief minister post after only a few weeks in power back in early 2014. Above all, this victory is significant because it will put more pressure on the AAP to expand into a more national party.

Moreover, Modi already was facing a challenge because the BJP lacks a majority in the upper house of parliament. Now there will be increased pressure on the BJP to win more seats in additional state elections that take place in the coming months. What this means is that despite its huge margin of victory in last year's national election, the BJP is going to need to double down and focus on the party makeup in the national assembly.

This in turn could mean that the BJP's laser-like focus on economic reform and other domestic issues that Modi has a large mandate to address could soften a bit, with more attention now focused on campaigning in state elections.

Is this the beginning of a movement that could potentially challenge Modi's BJP on the national stage in years to come?

For all his success in Delhi electoral politics and in his anti-corruption campaign, Kejriwal and his party remain a New Delhi phenomenon. 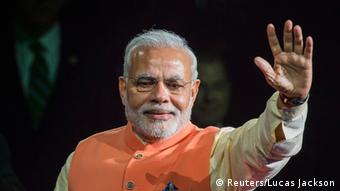 'The Delhi results will put increased pressure on the BJP to win seats in subsequent state elections, if it wants to realize its reform agenda,' says Kugelman

They do not have a national political presence that can even remotely compare with that of Congress and BJP. These two parties have much more national-level money, resources, and clout then the AAP does at the moment.

However, this could start to change in the future, and especially if Congress remains weak and if the voting population begins to sour a bit on the Modi-led BJP if it doesn't fulfill the sky-high expectations last year's election triumph saddled it with.

But for the foreseeable future, Kejriwal and his party will continue to play third fiddle to the BJP and Congress - meaning that they will continue to struggle to make major progress at the polls outside of Delhi. That said, given how far Congress has fallen, the AAP could in time begin to make some inroads in pockets of the country that have traditionally been Congress bastions.