Representatives from Pakistan, the USA, China and Afghanistan have met in Islamabad to discuss plans for peace negotiations with the Taliban. The Taliban, however, are not participating in the talks for now. 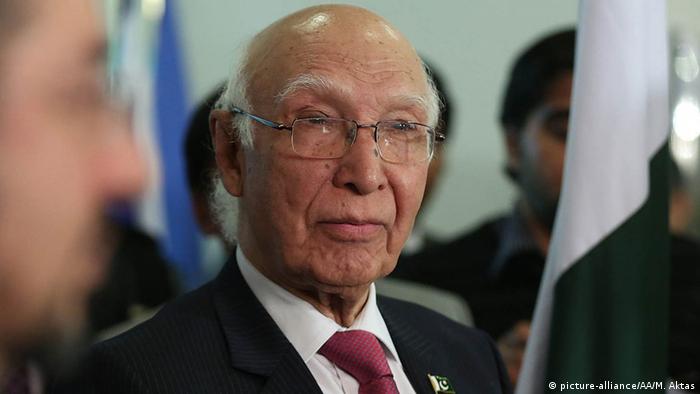 Afghan Deputy Foreign Minister Hekmat Karzai, Pakistani Foreign Secretary Aizaz Chaudhry and representatives from China and the United States met in the Pakistani capital on Monday to discuss strategies to revive the peace process between the Taliban and Afghanistan's government.

General Anthony Rock, the top US defense representative in Pakistan, Richard Olson, the US' special envoy for Pakistan and Afghanistan, and China's special envoy for Afghan affairs, Deng Xijun, were present in the meeting.

Speaking on the occasion, Pakistan's foreign affairs adviser Sartaj Aziz (pictured above) said, "It is going to be a complex task to bring the Taliban to the table…We will have to offer them incentives without any pre-conditions." Aziz insisted that the "use of military action against the irreconcilables" could not precede talks.

Peace talks between the Afghan government and Taliban representatives began last year, with Pakistan as the mediator. However, the negotiations stalled after the Taliban announced that its leader, Mullah Mohammed Omar, had been dead for two years, leaving the group in disarray and struggling with infighting. Members of the militant group are still split when it comes to negotiations, with some considering joining talks.

Monday's negotiations are taking place amid spiraling violence by the Taliban, who stepped up their offensive after the withdrawal of foreign forces from the country in late 2014. The militants regained control over the opium-rich province of Helmand last month and also succeeded in capturing the northern city of Kunduz for a short period last year. Members of the Taliban have launched several attacks on Kabul, underlining the Afghan forces' inability to defend against the militants.

Afghanistan and Pakistan have agreed to hold talks with US and Chinese officials next month aimed at restarting stalled peace talks with the Taliban. The first round of talks in July collapsed amid Taliban infighting. (27.12.2015)