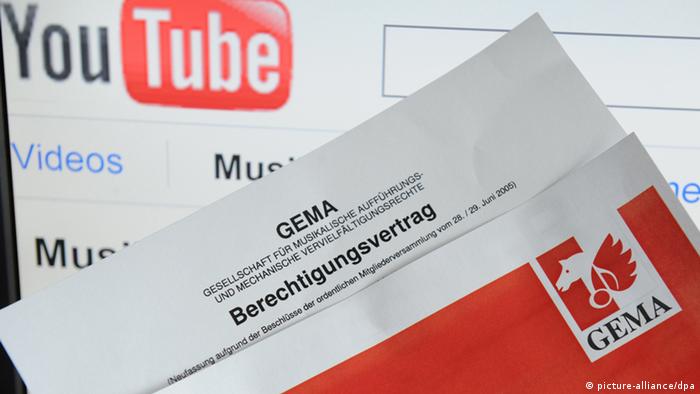 The internet video platform YouTube and the German rights collection society GEMA have reached a deal under which artists who are GEMA members will receive payment when one of their videos is viewed, both sides announced on Tuesday.

The agreement also brings an end to the red "blocking banners" notifying users in Germany that access to their favorite music was banned for copyright reasons. 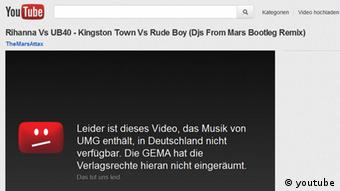 German music users will no longer face this sight

YouTube called the deal a "pioneering agreement," saying that it would enable music fans in Germany "to enjoy even more of their favorite songs on YouTube as of now."

It said the artists represented by GEMA would also benefit both from using the platform as a way of reaching "new fans," and from payments received every time one of their videos is accessed. According to the online version of the daily "Frankfurter Allgemeine Zeitung," both sides have agreed not to reveal the amount paid for each view.

Thomas Theune from GEMA told the paper that the agreement was a milestone" that "at last [secures] some 70,000 composers, lyric writers and publishers a share in the use of their intellectual creations on YouTube."

YouTube, which is run by Google, and GEMA had been involved in a legal battle over copyright issues for years after a previous license agreement expired in 2009.

The "blocking banners" disappeared early on Tuesday morning, to the doubtless relief of music lovers in Germany who for years have been frustrated at not being able to access all the videos available on YouTube in other countries.

This popular video by South Korean artist Psy, for example, is now free to enjoy by all.

Germany's top criminal and civil court has ruled that Internet providers can be ordered to block certain websites. But it stressed that copyright holders must first try other means to stop illegal content distibution. (26.11.2015)

Settling down in Germany is not always easy for refugees. Three young Syrians are seeking to help the integration process, by posting funny YouTube videos to address cultural differences. (20.09.2016)

The song "Happy Birthday" has joined the public domain, ending a long-running suit over its copyright. Music publishers earned as much as $2 million per year in licensing commercial use of the popular tune. (28.06.2016)

A large group of prominent musicians has sent a letter to the European Commission, complaining that YouTube robs artists of income. But the powerful online service doesn't subscribe to that point of view at all. (30.06.2016)