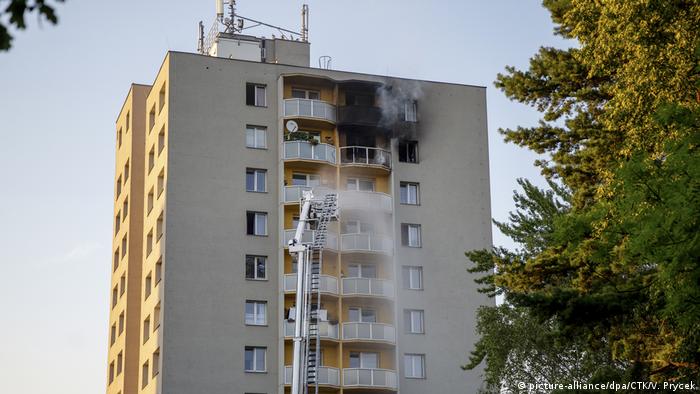 At least 11 people were killed in a fire at a Czech high-rise apartment building on Saturday.

Local police say the fire occurred on the 11th floor of a 13-story building in the town of Bohumin, which is about 300 kilometers (190 miles) east of the national capital, Prague. Regional governor Ivo Vondrak said the fire alarm sounded at 17:49 local time (1549 GMT) and firefighters arrived five minutes later.

A spokesman for local firefighters said the blaze itself killed six people, including three children, as well as one dog. Another five people jumped out from the 12th story and died.

Regional fire squad leader Vladimir Vlcek told Czech Television that the fire spread quickly, "which is not normal. A fire like that typically affects one room, but this one hit the entire flat, all the rooms are burnt down."

He added that if there was more time, they would have had a cushion ready for the jumpers from the 12th floor. "The impact would not have been so tragic," said Vlcek.

Vondrak said 13 other people were injured, including two firefighters and one police officer.

Authorities were still investigating the cause of the blaze. Police detained one person in connection with the fire.

Regional police chief Tomas Kuzel told public Czech Television that police have suspected that the fire was arson, comparing it to a gas explosion in 2013 that killed six people, including the culprit.

"It's similar," said Kuzel, "the culprit there also basically liquidated a block of flats and left many people dead."