Day one of using Germany′s coronavirus tracing app | Germany | News and in-depth reporting from Berlin and beyond | DW | 16.06.2020

As Germany eases lockdown rules, the new "Corona Warning App" aims to track infection chains and curb the spread of COVID-19. On launch day, our Berlin reporter Kate Brady tried it out. 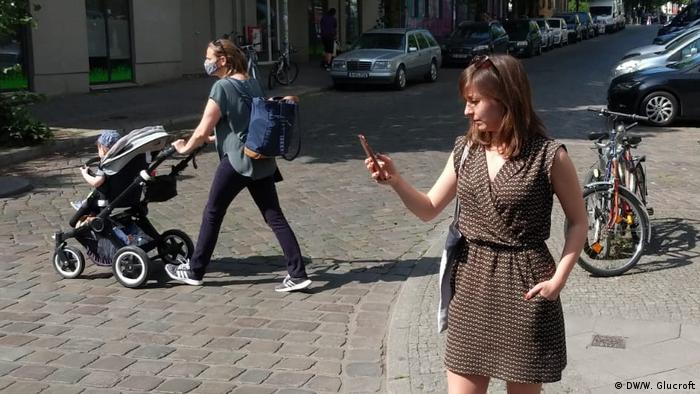 So this is it: Germany's coronavirus tracing app is finally ready to download.

At seven in the morning and over a cup of coffee, I give it a go: not easy to find in the App Store. Only under its full title "Corona-Warn-App" (Corona warning app) can I finally locate and download it.

"Together in the fight against Corona," the welcome screen says. Pictured is a man sporting a hipster beard and top-knot, an old man with a walking stick, a child in a wheelchair, and two women, all staring intently at their smartphones. I get the message: This is for everyone. 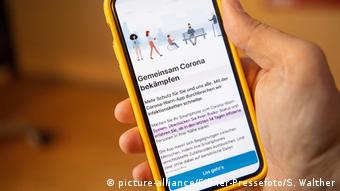 'Fighting Corona together' is the app's slogan

The download procedure is straightforward enough, I realize, as I click through reams of data protection information  — all available in English, as well as German. More languages are to follow.

At first glance, it reminds me of an old dating app that logged "missed encounters." Except on the coronavirus tracing application, the last thing you ideally want is a "match."

The concept behind the app is simple: using low-energy Bluetooth, the app monitors which other smartphones using the app are in the vicinity and for how long.

If I've been in close contact with someone for 15 minutes or more, who also has the app and then tests positive for COVID-19 AND feeds this information into the app — then I'll receive a "warning message." The exact location of contact and who it was that tested positive will not be disclosed.

In the German capital on Tuesday, Berliners seemed to be divided.

Two elderly women in eastern Berlin told me they won't be downloading the app: "Absolutely not," they say.

Only one of them actually owned a smartphone. The other said she didn't trust the privacy settings.

"Data protection," one of them said, pointing a finger around to an unseen privacy violator.

The issue of privacy has been a huge issue in the development of the app — not least of all given Germany's historical experience with dictatorships and surveillance state.

The actual contact data in the corona tracing app, however,  is only stored locally on the users' respective smartphones and it is encrypted in such a way that even the phone owners cannot view it. The data is automatically deleted after two weeks.

Kindergarten teacher Lisa, 24, has already downloaded the app. While she says she can understand privacy concerns, "sometimes there are more important things than data protection. Like our health."

"We've been relatively lucky in Germany so far.So hopefully this might help keep it that way and break the infection chain," she says. Germany has so far recorded some 190,000 cases of COVID-19, with some 8,800 deaths.

But some people who were willing to download the app simply couldn't. When I asked 27-year-old Jasper if he already had the app, he decided on the spot to download it.

Mahmut, 43, had similar issues. "My phone won't support the latest software," he says. "I'm sure I won't be the only person with that problem."

Indeed, not all smartphone users will be able to install the new app. Only Android devices from version 6 and iOS from version 13.5 are compatible. 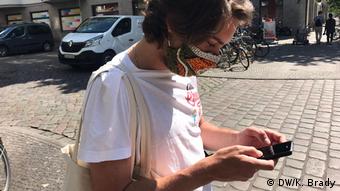 On social media, too, would-be users complained that the app is geo-blocked.

Although physically in Germany, the download may not work for users whose phones are registered elsewhere. They need to manually change the location of their app store account to Germany before being able to successfully download the app.

The app's developers, Deutsche Telekom and SAP, say it will be several more weeks before it has a "roaming function, which would make that unnecessary.

Seasoned Berliner Christa, 68, was loading her groceries into her bike basket, phone and keys balanced precariously in one hand.

She told me she'd be enlisting the help of her children and grandchildren to download the app. "I think it's the right move. But I'm not much of a smartphone person."

"I worry about how much it cost though. And it was delayed. Like our airport," she jokes, referring to Berlin's long-running punchline: the BER airport, set to open in October 2020, almost a decade later than planned.

"A lot of work has gone into it, which is why it took a couple of days longer," he said. "Overall we are within the desired budget and timeframe."

According to government figures, the app cost €20 million ($22.7 million) to develop and will require a further €2.5 million to €3.5 per month to operate.

For the app to truly be effective millions of people will have to download it. But according to a recent poll for public broadcaster ZDF, only 42% people said they would be willing to do so. That would be a far cry from earlier aspirations of reaching up to 60% of the population — a figure Spahn later dismissed.

Half a day into the launch, after speaking to several people as I made my way across Berlin, my "risk" level sits firmly at "unknown."

"Since you've not activated exposure logging for long enough, we could not calculate your risk of infection," the app says. My next update from the app is in less than 24 hours.

I pack my phone away, in the hope that COVID-19 will be "swiping left."