Day of mourning in Afghanistan as Kabul bomb toll tops 100

Afghan officials have raised the death toll in Saturday's bomb attack in the capital to 103, as the city remains on high alert. Authorities have warned of more possible attacks by Islamist militants. 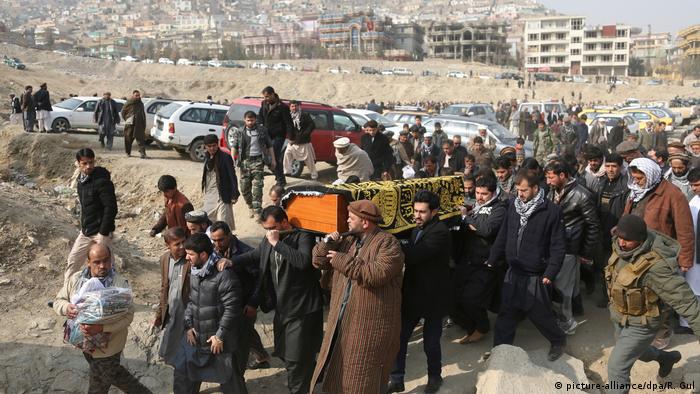 Afghanistan went into national mourning on Sunday after an attack the previous day in the capital that saw a huge bomb hidden in an ambulance go off, killing at least 103 people.

A further 235 were wounded, according to officials.

Security checkpoints in the city have been assigned additional personnel, with an alert issued on Sunday warning that the extremist "Islamic State" group was planning to attack supermarkets and shops in Kabul that are frequented by foreigners.

Read more: 'IS' claims deadly attack on Save the Children office in Afghanistan

- Flags in the capital are flying at half-mast following the attack, one of the worst to hit the city in recent years.

- The president's office has declared Monday a day off to allow the victims' families to be cared for.

- The attack has been claimed by the Taliban, which says it was in retaliation for a "policy of aggression."

- The bomb attack came a week after Taliban insurgents stormed the city's Intercontinental Hotel, killing at least 25 people, most of them foreigners.

Long-running insurgency: The Taliban, who have been waging a rebellion against authorities in Kabul since a US-led invasion in 2001, have stepped up their operations against Afghan security forces following the withdrawal of US and NATO combat troops at the end of 2014.

What are some consequences of Saturday's attack: Security in Kabul has been further tightened, while some foreign organizations are rethinking their presence in Afghanistan amid the recent spate of violence.

What reason does the Taliban give for recent attacks: The Taliban say they are responding to a new strategy by the US administration under President Donald Trump. Trump sent more US troops to Afghanistan last year and has also ordered an increase in airstrikes and other assistance to Afghan forces.

Several explosions went off in an area near the Marshal Fahim military academy in Kabul early on Monday. Reports indicated the explosions started at about 5 a.m. (0030 GMT) and lasted for at least an hour.

A Kabul police spokesman confirmed there had been an incident inside a military facility near the Marshal Fahim university and said it was not yet clear who was reponsible.

There is no word of casualties so far, although French news agency AFP has reported that some of the attackers had been killed and the gunmen had not managed to enter the academy building.