A painting by British artist David Hockney easily broke the record for a work by a living artist sold at auction. Selling for over $90 million, Hockney's painting easily eclipsed the previous record set by Jeff Koons. 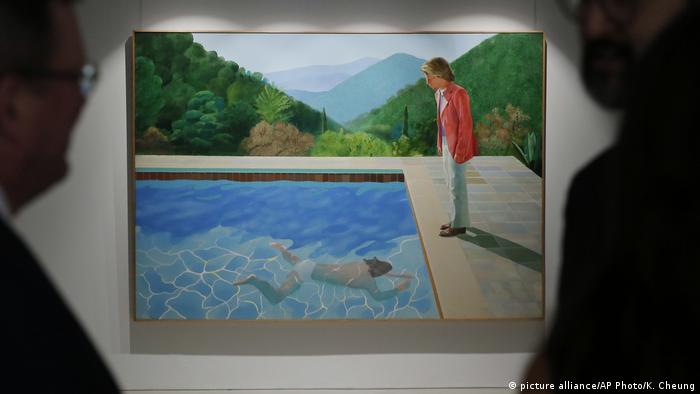 David Hockney's "Portrait of an Artist (Pool with Two Figures)" sold for a record amount in New York City on Thursday, breaking the record for the highest price at auction for a work by a living artist.

The previous record for a work sold by a living artist was held by Jeff Koons, whose sculpture "Balloon Dog" sold for $58.4 million at auction in 2013.

The Hockney piece was described as "the holy grail of his paintings, from both the historical and the market perspectives," by Alex Rotter, co-chairman of post-war and contemporary art at Christie's before the auction.

The 81-year-old British artist painted the work in 1972 after being inspired by the two photographs he found juxtaposed on his studio floor. It depicts a man in a pink jacket looking down at another figure swimming underwater in a swimming pool.

Hockney studied at the Royal College of Art before moving to California in the 1960s. He currently splits his time between the UK and the United States.

A retrospective of Hockney's art went on display last year at the Tate Britain, the Centre Pompidou in Paris and the Metropolitan Museum in New York.

The Art of David Hockney

Painting, photography, video: Tate Britain reveals the great versatility of David Hockney’s art. As he approaches his 80th birthday, the English artist and designer is still trying out new techniques and media. (01.03.2017)

Aquatic imagery: The power of water in art throughout the ages

From crashing waves and serene river scenes to sublime lilies in a pond, artists have long focused their masterworks on water's refreshing, purifying and revivifying essence. (26.07.2018)

Onlookers gasped as the painting of "Balloon Girl" shredded itself to pieces moments after the gavel came down after someone bid a million pounds. The price matched a record for the mysterious artist. (06.10.2018)