A new English-language theater ensemble in Berlin tackles a hot-button global issue: arranged marriage and women's rights. The production combines the strengths of both German and American theater techniques. 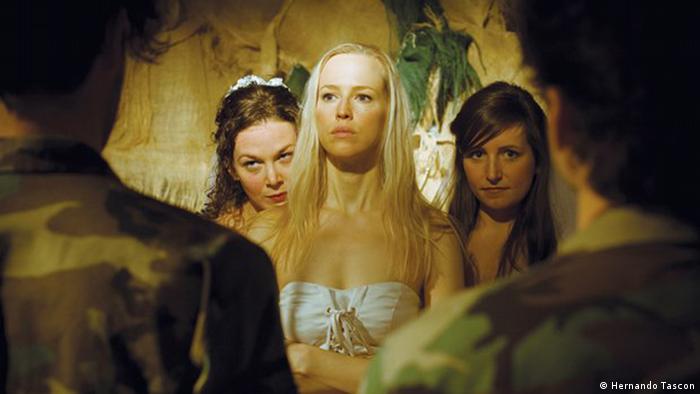 The play, performed by the Push Comes to Shove ensemble at the English Theatre Berlin, tells the plight of 50 sisters from Greece who flee arranged marriages to 50 brothers. The marriage deal was made by the two families before they were born.

The opening scene shows three sisters, dramatically representing the 50, washing up on a beach in Italy, after escaping their country on their wedding day. The scene symbolizes the dilemma of countless women around the world, where gender still decides whether an individual will have the freedom to choose their own path in life - or whether it's dictated to them.

Having been stood-up on the altar, the grooms come after their brides. When found, the most outspoken sister, Thyona, states their case: "We never agreed to marry you!" Her betrothed replies angrily, "We have a prenuptial agreement; we have a deal!"

The sisters had hoped they would find safety within the borders of another nation, but as is often the case with people fleeing persecution, the host nation couldn't - or wouldn't - deliver, telling the sisters it was "out of their hands." But is it? This is one of the major questions "Big Love" poses.

Director Andre Bolouri says the magnitude of the play's themes is just the kind of meaty, dramatic material that motivates him. Bolouri, originally from East Berlin, was unsatisfied working in German state theaters early on in his career, so he went to the United States to train at the Actors Studio in California and New York.

The Actors Studio is an international acting community that follows the Meissner method, known for its "just do it" approach. Bolouri says that's exactly what's lacking in the German approach to acting, which is even evident in the German word for "to act:" schauspielen.

"It is already in the word schauspielen - show the play," says Bolouri. "And you don't have that in English. In English, it is 'acting,' 'doing.' One thing I really learned in the US is the immediacy and urgency of acting. I miss that in Germany. In general here I find acting very predictable." 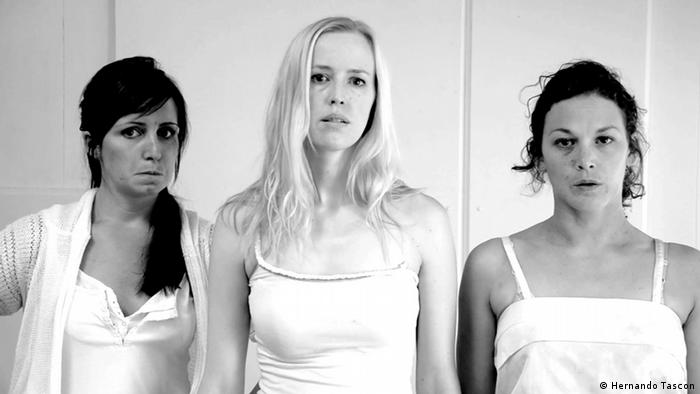 The director notes that no matter how excellent the craft of acting may be in the US, he says it was often devoted to work that was fluffy and forgettable. Back in his native Berlin, Bolouri wants to merge what he feels are the two decisive qualities of a fine, dramatic theater piece.

He hopes "to bring the urgency of acting to the immediacy of a performance," the director says, adding that he feels "Berlin is the place for that at the moment."

Berlin finds itself on stage

Bolouri founded the Push Comes to Shove ensemble in the German capital to train young, aspiring actors in the Meissner technique, and also give them the chance to put their training into practice.

Twenty-six-year-old American actress Sara Fay George, who plays Lydia in "Big Love," the naïve young woman torn between loyalty to her sisters and her own individual wishes, worked with Bolouri in the US before she braved the Berlin theater scene.

George says Berlin is still defining itself in the theater world and drawing an influx of creative people from all over the world. Comparing the German capital to her experience in the US, she says that "Berlin is so much more open right now to trying new things."

While Berliners are open to new ideas and creative collaborations, according to the actor, she found New York to be much more money-oriented.

In "Big Love," American playwright Charles Lee adapted the Greek tragedy, "The Suppliant Women." Bolouri chose the work for his first Berlin production because it's not overly conceptual or intellectual - as he says German plays often are.

"I find American writing is material you can actually act on and deliver to an audience and make it a full and emotional experience and not just an intellectual experience - a physical experience," Bolouri explains. "Sometimes words are not enough to express and bring all these things together."

While American society is notoriously regarded in Germany as being superficial, such acute shallowness seems to work when it comes to the fictitious world of theater, says Peer Göring, one of the few native German members of the cast.

"Everyone says the Americans are so superficial, but I think in everything that concerns theater and film they are very connected to the core and want to go very deep," the actor explains. "Germans are, I think, afraid of feelings." 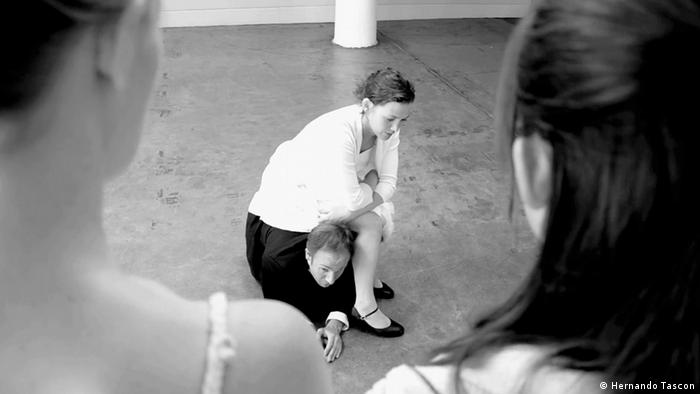 After a hard struggle, the women gain the upper hand in the end

Göring says he finds it interesting to play the character Constantine, a brash macho that went to war and was damaged by the experience, like so many young men throughout history. Now, Constantine is at war with women and himself. He is deeply conflicted in rationalizing the horrific deeds of wartime, while living once again in a "civilized society."

"Suddenly, when it is over a man is expected to put away this impulse to hurt and the ability to kill somebody and carry on with life as if he didn't have such impulses and to know that, if he does, he is a despicable person," Göring explains says about the schizophrenic dilemmas of his character. "So I asked myself, what about these guys who have been in Afghanistan and their comrades died, and they had to kill people? What does it do to people?"

No justice without love

When the sisters are found and refuse to return and get married, Constantine rapes his bride to be, Thyona, in an attempt to force her into submission. This only drives her to come up with a hideous plan: The sisters agree to marry, but then kill their husbands in cold blood on their wedding bed.

Their extreme act of rebellion symbolizes what people are capable of when their rights are taken away, and their bodies violated. It also demonstrates that when violence and power are misdirected, the family - that is, the core of society - is torn apart.

At the end of the play, Thyona sums up the themes that are addressed, but left unsolved: "If there is no justice, there cannot be any love."

Theater is a place to tackle controversial theories, display emotion, or just have fun. (16.01.2013)

Listen to the report by Leah McDonnell