Daimler doubles down on austerity as electric era beckons | Business| Economy and finance news from a German perspective | DW | 11.02.2020

Daimler doubles down on austerity as electric era beckons 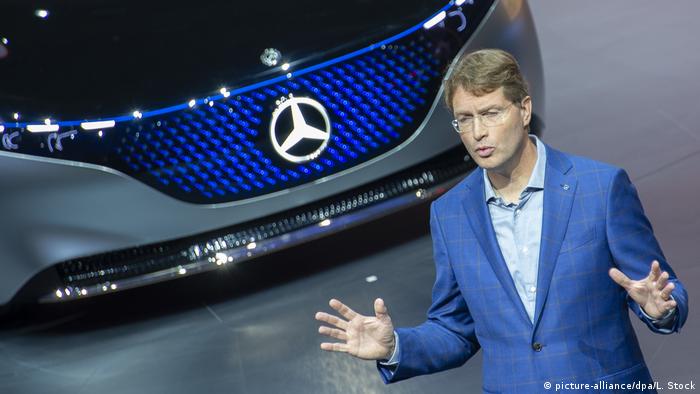 If investors needed further proof that the transition by German carmakers to electromobility will be painful, Tuesday's news conference by Daimler Chief Executive Ola Källenius certainly provided it.

Despite another record-selling year for the firm's Mercedes brand, the luxury auto manufacturer announced its 2019 net profit fell by almost two thirds to €2.7 billion ($2.9 billion). In the fourth quarter, the Stuttgart-based company lost €11 million, compared with a profit of €1.64 billion in the year-earlier quarter.

The firm said it had set aside an extra €1.5 billion in charges relating to the Dieselgate scandal that saw some 700,000 of its vehicles fitted with devices that could skirt pollution regulations. The figure is in addition to the €4 billion already announced, to deal with legal costs, recalls and fines.

Källenius admitted the next three years would be "tough" for Daimler and promised to work "around the clock" to return the firm to a better footing. He said the company had introduced far-reaching measures to reduce costs, referencing the €1.4 billion austerity program announced last year.

Daimler's woes are exacerbated by the huge investment it is currently undertaking in electromobility and autonomous transport, as it seeks to dethrone US rival Tesla as the king of the battery-powered-luxury-car market. But having previously underestimated the speed of the technological change, the German national treasure now faces a huge uphill battle.

"Daimler has fallen behind, especially when it comes to the No.1 topic of the future: e-mobility," auto analyst Jürgen Pieper told DW ahead of the news conference. "It is actually in danger of falling out of the group of companies leading us towards this new future."

Earlier on Tuesday, the firm restated its plan to undertake a "worldwide, socially responsible reduction of jobs," including the cutting of management positions. However, Källenius did not give specific figures.

Although there was no mention of the higher figure in the news conference, Chief Financial Officer Harald Wilhelm estimated the total cost of the corporate restructuring would be around €2 billion.

Daimler said it would also slash employee profit-sharing bonuses from nearly €5,000 to just €600. Investors, meanwhile, will see a dividend of just 90 cents per share versus €3.25 last year.

More fines on the horizon

Like other carmakers, Daimler could also face huge fines next year from the European Union if it fails to meet the bloc's CO2 emissions targets. Data from the European Federation for Transport and Environment suggests the luxury carmaker will need to boost sales of electric vehicles by between 10 and 18% to avoid fines of almost €1 billion.

Perhaps surprisingly, Daimler has yet to be fully impacted by the global slowdown in new vehicle sales. Last year, it maintained the same overall unit sales of 3.3 million as the previous year. Mercedes sold 2.34 million cars in 2019 — a ninth consecutive record year.

But although Mercedes saw a growth of 1.3% globally, sales of the firm's micro Smart models fell 9.3%, while its trucks division saw a 4% annual drop.

Daimler continues to perform strongly in China, the world's largest auto market. Mercedes sales grew 11.1% in 2018 along with a further 6.2% last year. But in another key market, the United States, sales fell 5.3% in 2018 compared with the previous year and only increased marginally last year. Tesla, meanwhile, has seen sales grow tenfold.

Added to that, automotive profit margins are falling, from around 9% to 3% in 2019, according to the London-based brokerage, Evercore ISI.

Rumors emerged last month that Daimler may also struggle to meet production targets for its new electric models. A report by the German weekly Manager Magazin suggested the company would have to slash output of its EQC models due to a shortage of battery cells from its supplier LG Chem.

Daimler denied that its planned 60,000 output would be cut in half in 2020, but those rumors continue to linger. The Handelsblatt report published on Monday spoke of a crisis in the company over its finances and the battery issue.

Frank Schwope, automotive analyst at German lender Nord LB said in a research note that as Daimler is now struggling in the face numerous electric high-end competitors — not just Tesla — it should now consider a merger.

"However, the hurdles for a merger are very high given the shareholder structure and political interests," Schwope admitted.

Daimler will need over a billion euros on top of the €1.6 billion it already set aside to cope with the fallout of an emissions cheating scandal. Legal disputes and car recalls caused the firm's profits to fall in 2019. (22.01.2020)

Daimler to cut thousands of jobs worldwide by 2022