The outgoing head of Daimler, which makes Mercedes-Benz cars, will pocket more than €1 million annually and is eligible for even more. The sum is reportedly a record pension package for the head of a German company. 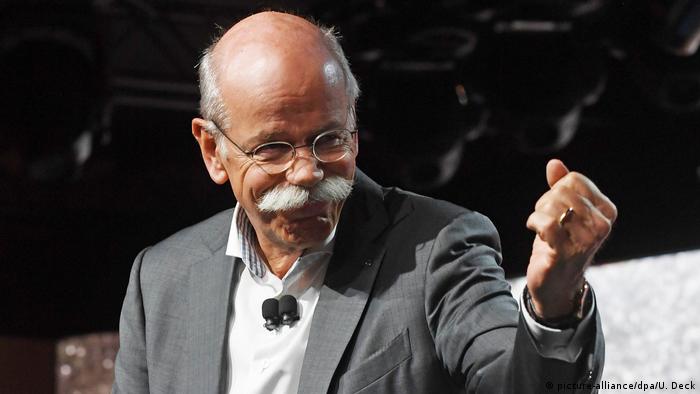 Dieter Zetsche, the chairman of German carmaker Daimler, will get an annual pension package of €1.05 million ($1.2 million) after he leaves his post this year, the company confirmed Sunday.

"There could be further claims on top of that," a Daimler spokesperson told news agency dpa, adding that the pension package was set in 2017.

The spokesperson said Zetsche would also be entitled to draw on a separate retirement fund set up for Daimler managers which could amount to an additional €500,000 per year.

That amount, combined with his pension package, would break down to around €4,250 per day.

That figure matches the amount cited by German newspaper Bild am Sonntag, which initially reported on the story.

Zetsche stands to make even more money if he joins the Daimler board, which he would be eligible to do in 2021.

The spokesperson emphasized, however, that should Zetsche join the board, the additional income he receives "will be newly determined then."

Newsmagazine Der Spiegel reported that Zetsche's pension is on track to become the highest received by a boss of a major German company.

Until now, former VW head Martin Winterkorn held the title for the highest company pension package in Germany — breaking down to around €3,100 per day, according to Der Spiegel.

Zetsche is due to leave his post in May and will start drawing his pension in 2020.

The current head of development, Ola Källenius, is due to replace him.

Chinese billionaire Li Shufu first made global headlines when he bought carmaker Volvo in 2010. Now, he's acquired a sizable stake in German automaker Daimler, making him one of the industry's most influential players. (26.02.2018)

Daimler AG head Dieter Zetsche has expressed his concern on the lack of female management power in his company. The outgoing CEO has said he hopes to have a woman take on his role when he retires. (25.11.2015)