The Düsseldorf Carnival Committee has canceled the city's parade because of the approaching low-pressure system Ruzica. With major carnival city Mainz also calling a rain check, the duties fall to Cologne's revelers. 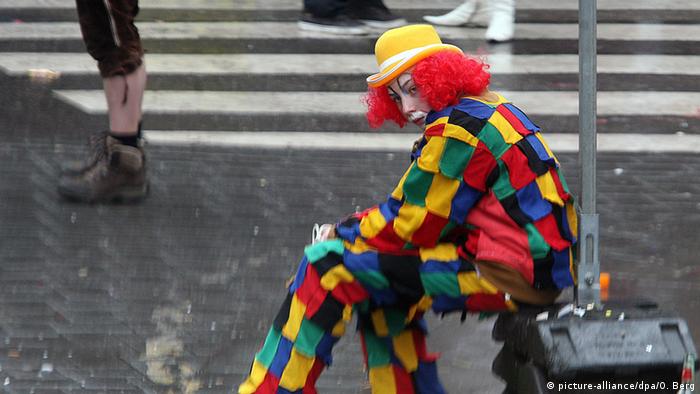 On Monday, the Düsseldorf Carnival Committee assured that an alternative date for this year's parade would be found as "quickly as possible."

A spokesperson for the committee said that after early-morning discussions the parade could not be authorized with a storm expected.

With Carnival fever set to peak on Monday, parts of the German state of North Rhine-Westphalia were expected to see winds of up to 100 kilometers per hour (60 mph).

Thunderstorms and heavy showers with lightning were also expected, but temperatures were expected to stay relatively warm at 10 degrees Celsius (50F).

The severe weather warning also dampened Carnival cheer in other parts of the Rhineland region, with authorities calling off parades in Mainz, Duisburg, Münster and Hagen.

In Cologne, city authorities decided to go ahead with Monday's parade, albeit with restrictions. Police banned any large flags, placards or figurines from being used on the floats. Participants were also asked to dismantle any heavy installations on carriages and buildings. Horses, roughly 500 in all, were prohibited from taking part in the procession, too.

The traditional Rosenmontag, or Rose Monday, parades are widely seen as the pinnacle of the Rhineland's carnival season, with colorful and satirical floats alternating with brass bands and dance troupes. Around half a million people usually turn out to watch their local parade and collect "Kamelle" - sweets and small novelties which are thrown into the crowds.

Carnival, also called the "fifth season" in Germany, is a traditional period of celebration ahead of the Christian period of abstinence known as Lent, with a political angle stemming from public criticism of 19th-century French rule in the parts of western Germany where the tradition is most beloved.

The number of sexual assaults at the start of Cologne's Carnival has more than doubled since 2015. Authorities believe the increase is largely due to an increased willingness to report incidents. (05.02.2016)

Germany's carnival celebrations kicked off despite a fresh series of terror-related arrests across the country. The city of Cologne also increased police numbers, aiming to stop a repeat of violence from New Year's Eve. (04.02.2016)

A day into Carnival, Cologne's residents speak up

After a month of concerns following New Year's Eve attacks in Cologne, the Carnival celebrations kicked off with Weiberfastnacht, or 'Women's Carnival.' But is it doomed to be overshadowed by the NYE assaults? (05.02.2016)

Meghan and Harry interview: The reactions 12m ago