The number of sexual assaults at the start of Cologne's Carnival has more than doubled since 2015. Authorities believe the increase is largely due to an increased willingness to report incidents. 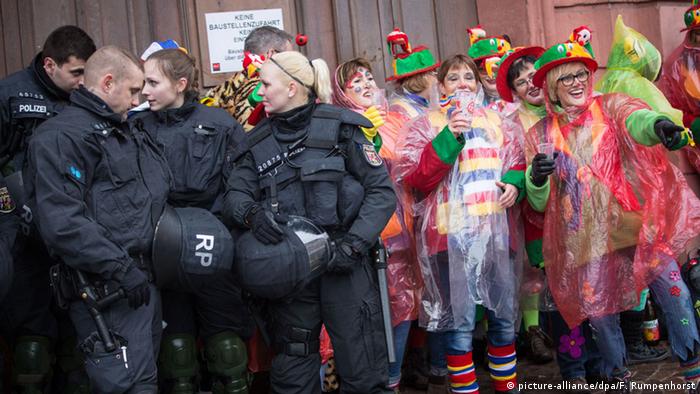 Cologne's police director Michael Temme confirmed on Friday that authorities received reports of 22 sexual offenses on "Weiberfastnacht" (Women's Carnival Day), which is celebrated on the last Thursday before Lent.

During last year's "Weiberfastnacht," only nine cases of sexual assault were reported, and 10 in the previous year. Two of the 22 offenses were deemed "serious," one of which involved a Belgian TV reporter who was groped by a reveller live on air.

"My piece to camera was chaotic, people showing middle fingers, a man who was having fun miming a sex act behind me - who had no place there - and then most importantly, a hand was placed on my breast."

The two men seen on-camera seemed to be of European appearance.

The second case involved a woman who was knocked down on her way home in the early hours of Friday morning and "evidently raped," police said.

Police attributed the jump in the number of assaults to an increased willingness of victims to report such incidents. Temme said the attacks at New Year's Eve in Colognecould have influenced the rise in reports.

Among the reports from Thursday was a case in which a bouncer reportedly told a woman that he would only let her into the bar for 25 euros or "Bützje" which is the local term for a "kiss" - a term widely heard during Carnival festivities.

"I don't want to play that down, but that shows that the willingness of women to report has changed," Temme said, adding that a year ago, such an incident wouldn't have been reported.

In addition to the 22 sexual assaults, Cologne police received 143 reports of bodily harm and 30 reports of theft. The number of police officers on the streets of Cologne was doubled for this year's celebrations to 2,000, 11 of whom were "lightly injured" after attempting to defend themselves.

Carnival celebrations, which peak during in the six days before the Christian observance of Lent, is an integral part of the culture of Cologne and Germany's Rhineland area. This year's festivities came five weeks after a string of sexual assaults in front of Cologne Cathedral at the city's New Year's Eve celebrations.

The attacks sparked a nationwide uproar, resulting in the removal of Cologne's police chief and leading to a heated debate about the integration of asylum seekers. Most of the attackers accused of 446 allegations of sexual assault and three instances of rape in Cologne were described as being of Arab or North African origin.