Andrej Babis and his ANO party came away with the lion's share of the votes, outpacing their nearest rivals by nearly 3-1. Still, it was a banner day for insurgent parties, two of whom had especially strong showings.

The billionaire businessman Andrej Babis will become the Czech Republic's next prime minister after his centrist ANO party won 29.6 percent of the vote, or 78 seats in the 200-seat lower house of parliament, in a two-day election that ended Saturday.

"It's a huge success," the 63-year-old Babis told supporters and journalists at his party headquarters in Prague.

The country's second-richest man and former finance minister has been dubbed the "Czech Trump" for his populist anti-establishment rhetoric — including lambasting the press as morons.

Speaking after the victory, Babis sought to allay fears that the next Czech government would cement an East European block, along with Poland and Hungary, hostile to the European Union. Babis said his party wants to take a more active role in shaping EU policy, and that Brussels should stop thinking about a two-track Europe and pay more attention to the reasons why the UK voted to leave the bloc.

With a commanding number of seats in parliament the math suggests he should have a number of options in forming a governing coalition. But establishment parties are balking at joining a government with a potential prime minister who is under criminal investigation, while the insurgent parties remain something of a wild card.

But Babis threw the door open and said he would consider coalition talks with all of the parties in parliament.

The center-of-right Civic Party, once the dominant conservative party in Czech politics came in at a distant second with a little more than 11 percent of the vote, and 25 seats in parliament.

The left-of-center, anti-establishment Pirate Party surged into parliament with 10.8 percent of the vote, followed closely by the far-right nationalist Freedom and Direct Democray party (another newcomer to parliament) with 10.6 percent. Each party will likely hold 22 seats.

Despite a booming economy featuring healthy economic growth, low unemployment and wage growth, the ruling left-of-center Social Democratic Party was pummeled at the polls, winning just 7.3 percent in their worst showing since the break-up of Czechoslovakia in 1993.

They hold 50 seats in the outgoing parliament but are likely to have just 15 in the next legislative session.

They appear to have been done-in by anti-immigrant and anti-Islam anxiety, as well a healthy dose of euro-scepticism on the part of the public.

Political analyst Michal Klima called the results "a voting hurricane," during a discussion on public broadcaster Czech Television, referring to the success of the political newcomers and the poor results for the establishment parties. 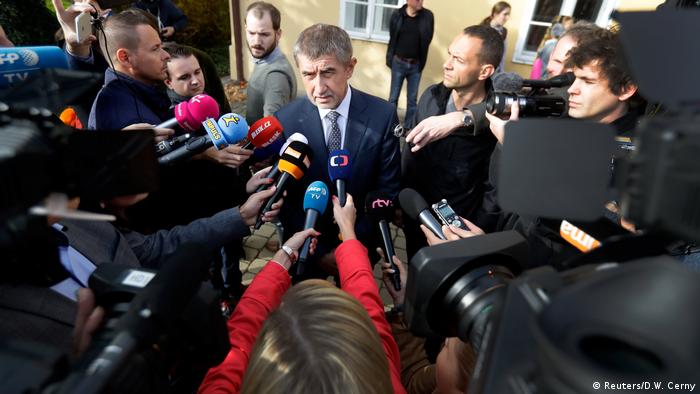 Babis has been assailed with claims of financial impropriety

Ahead of the vote, Babis was repeatedly accused of corruption and of abusing his media holdings as mouthpieces for his political agenda and to attack his political opponents. He was sacked as finance minister in June amid ongoing accusations of financial impropriety.

Babis is the founder of Agrofert, an agriculture, food, chemical, construction and media conglomerate based in the capital, Prague. He founded the ANO (short for Action of Dissatisfied Citizens) party in 2011, and his company continues to be the group's major funder.

For years he was under investigation by both Czech police and the European Commission's anti-fraud office, OLAF, following allegations that a company he controlled had illegally received EU subsidies. He was stripped of his parliamentary immunity in September 2017 and was formally charged with fraud in early October.

Members of the country's mainstream parties, whom Babis has labeled idiots, have said they will refuse to form a government with a party whose leader is under criminal investigation.

Still, President Milos Zeman is likely to gift Babis with the task of forming the next government.

The Czech parliament has stripped billionaire and centrist ANO party founder Andrej Babis of his immunity, meaning that police can bring fraud charges. He denies misusing EU small-business subsidies in 2007. (06.09.2017)