Milos Zeman has raised doubts over Moscow's complicity in a huge explosion at an ammunition warehouse. It comes after a diplomatic row over accusations of Russian sabotage. 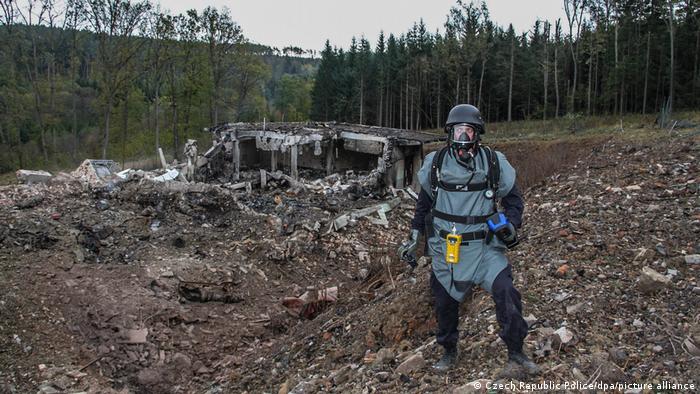 Russia may not have been behind the 2014 blast at a Czech ammunition depot, Czech President Milos Zeman said in a televised address on Sunday.

After retaliatory expulsions by Moscow, the Czech government ordered a further 63 diplomats and Russian staff to leave by the end of May.

However, addressing the public, Zeman warned against "any form of hysteria" and called on people to wait for the results of a police investigation.

He said there were two working theories of how the 2014 blast at the private ammunition depot happened: one involving Russian sabotage, the other involving an accident due to the mishandling of explosives.

"I take both of these theories seriously and I wish for them to be thoroughly investigated," he said.

"I hope that we will learn the truth," the president said, without ruling out the idea that it was an "intelligence game with serious consequences for our domestic political life."

Two people died in the blast in Vrbetice, in the east of the country.

Zeman said that there was no evidence that the two alleged spies entered the facility.

The Kremlin has fiercely denied the accusations of Prime Minister Andrej Babis' government.

Zeman is widely seen as having close links to the Russian government and was hosted by President Vladimir Putin in Sochi in 2017. He has been in the largely ceremonial role since 2013.

After his address, Czech opposition politicians accused him of engaging in disinformation, and criticized him for casting doubt on the work of the secret services.

Opposition figure Pavel Fischer, who is head of the foreign, defense and security committee of the upper house of parliament, said he saw conclusive, confidential information and that Zeman's doubts damaged the country's reputation.

"Zeman now openly stands on the side of Russia and has become its advocate," Fischer said in a Facebook post.

Is Russia behind the 2014 Czech munition depot blasts?