Czech President Milos Zeman has asked election-winning populist Andrej Babis to form a minority government despite his ANO being snubbed by other parties. They consider him unsuitable because of fraud charges. 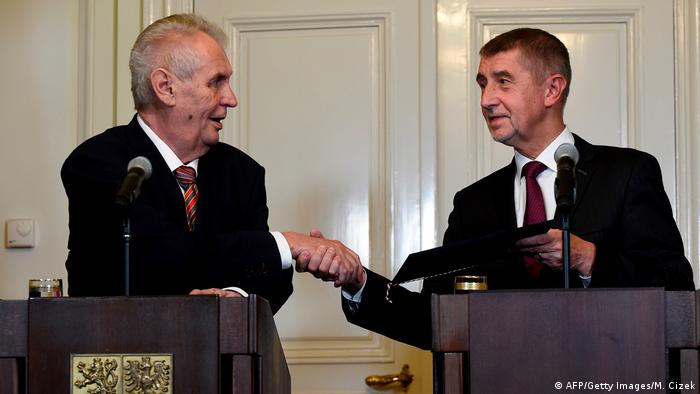 Babis (R) has Zeman's backing to form a minority government

Zeman, appearing alongside Babis at the Czech presidential chateau near Prague Tuesday, said he would even give the billionaire a second chance if Babis' anti-establishment movement ANO failed to initially win a parliamentary confidence vote.

ANO ("yes" in Czech) won 78 of the 200 seats in the Czech lower house of parliament on October 21, well short of a majority in the nine-party chamber.

All, apart from the Czech far-right, have refused to join ANO in a coalition, citing fraud charges Babis faces over EU subsidies.

At Tuesday's news conference, Babis said he would continue to "try to convince lawmakers" of other parties to support ANO, before parliament is due to convene on November 20 and would seek to form a functioning government by Christmas.

Another failure would hand the task of selecting a prime minister to parliament's new speaker, expected to be a member of ANO.

Given the impasse, the 10.8-million population Czech Republic potentially faces months of political wrangling which could stymy approval of the 2018 budget and dampen investments in a previously buoyant economy.

Babis has already hinted his cabinet could include independent experts to advance his agenda of delivering a more effective state to deliver economic fruits fairly.

He is an opponent of the Czech Republic dropping its Crown for the euro common currency and has said one of his first steps would be to increase pensions.

The billionaire denies wrongdoing in what police say was a bid to hide ownership of a farm and conference center near Prague in 2008 so it could qualify for 2 million euros in incentives only intended for small businesses.

Babis' Agrofert group, placed in a trust fund earlier this year, spans over 250 companies in chemicals, food, farming and media across central Europe.

Last week, Babis was spurned during talks with other parties, including the Czech center-left Social Democrats, who led the previous coalition, and the center-right Civic Democrats, which emerged second-strongest after ANO.

The Czech parliament has stripped billionaire and centrist ANO party founder Andrej Babis of his immunity, meaning that police can bring fraud charges. He denies misusing EU small-business subsidies in 2007. (06.09.2017)

Czech billionaire Andrej Babis' election victory has triggered widespread warnings of a shift to the political right in Eastern Europe. We should avoid making such blanket generalizations, however, writes Keno Verseck. (23.10.2017)

Czechoslovakia and Yugoslavia: Division and disintegration

Twenty-five years ago this weekend, the fates of Czechoslovakia and Yugoslavia were sealed. Though the countries were created in a similar way after World War I, they ended up very differently. (26.08.2017)