Czech police are denying that a method of restraint led to the death of a Roma man after video of an arrest sparked widespread outrage on social media. Roma say the incident draws parallels to the death of George Floyd. 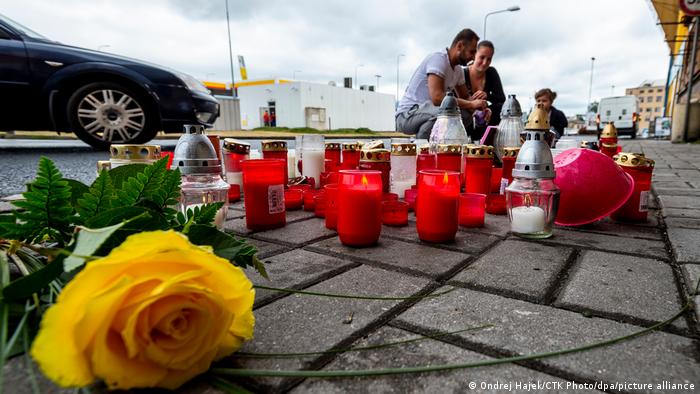 Improvised memorial in Teplice at the site of Saturday's Roma arrest

Police in the Czech city of Teplice are denying "any connection" between policing methods and the death of a Roma man on Saturday who was being arrested for allegedly "vandalizing cars."

A video of the incident obtained by Czech media and posted on YouTube shows three police officers subduing the man next to a police car during the day on a city street. One of the officers is seen kneeling on the man's neck for several minutes until he stops moving.

The video has been viewed more than 80,000 times since Tuesday, and Roma activists are comparing the incident to the police killing of George Floyd in the US last year.

How have police responded to accusations?

In a statement released Monday, Czech police said the "aggressive" man was under the influence of methamphetamine, and died in an ambulance on the way to the hospital after the police subdued him and noticed he was not showing signs of life.

"No 'Czech Floyd,"" police posted on Twitter Monday, adding the man had been a "repeat offender."

Police said that a medical examiner identified the "preliminary cause of death as a drug overdose." A forensic autopsy had also "revealed" a coronary artery disease.

Police said they had initially responded to a call that two men were allegedly assaulting each other and damaging vehicles. The man was shirtless and had "obvious" injuries, and one of the officers was bitten as they tried to subdue him, police added.

A journalist with the Prague-based Romea.cz news service Zdenek Rysavy, said said eyewitnesses were asked by police not to talk to the media about the case as long as the incident was under investigation.

Despite these requests from police, the video taken from an apartment directly above the street, drew widespread attention to the incident.

At the site of the incident on Tuesday, people formed an improvised memorial on the sidewalk with candles and flowers. 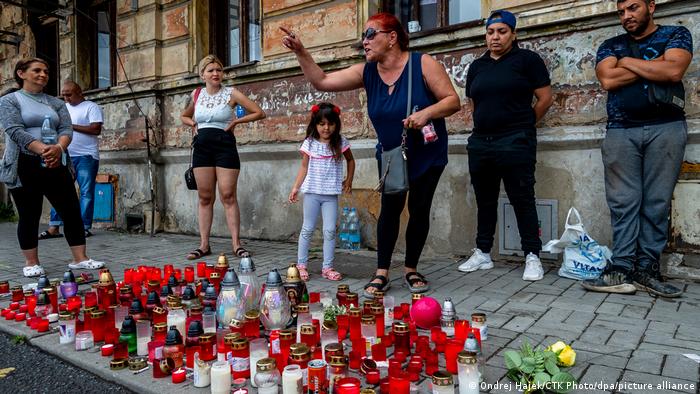 Improvised memorial in Teplice at the site of Saturday's incident

"Many members of the Roma community are "comparing the case to the murder of the Black man George Floyd," wrote Rysavy on Tuesday.

In May 2020, Floyd was killed by Minneapolis police officer Derek Chauvin, who had kneeled on Floyd's neck for 9 minutes. The incident resulted in Chauvin being convicted of murder, while sparking nationwide protests, and drawing attention to police practices during arrests.

Interior Minister Jan Hamacek of the Czech Social Democrats said via Twitter the police officers involved had his full support.

If someone was under the influence of substances and was breaking the law, "they must expect that Czech police will intervene," wrote Hamacek, adding that thanks to police the Czech Republic was among the "top ten safest countries in the world."

The Vienna-based European Union Agency for Fundamental Rights (FRA) said the plight of Europe's Roma remains "troubling," with 80% living below poverty thresholds, and half aged between 6 and 24 not in employment, education or training

The chancellor said it was a "disgrace" that Roma still face prejudice in Germany. She donated her prize money to Roma youth network ternYpe and Gruenbau, an integration project in Dortmund.

A Hitler-like rubber mask displayed in Prague at a souvenir shop has been condemned by Germany's ambassador Christoph Israng. Czech Interior Minister Jan Hamacek replied that police were already dealing with the matter.

Prague asked 18 Moscow officials to leave on the weekend over possible links to a 2014 explosion at a weapons factory. Now, the Czech Republic is seeking "solidarity" from its EU and NATO partners.