Some of Germany's most valuable creative works went up in flames on May 10, 1933. The mass book burnings marked a turning point in the Nazis' ideology campaigns. And they were largely organized by university students. 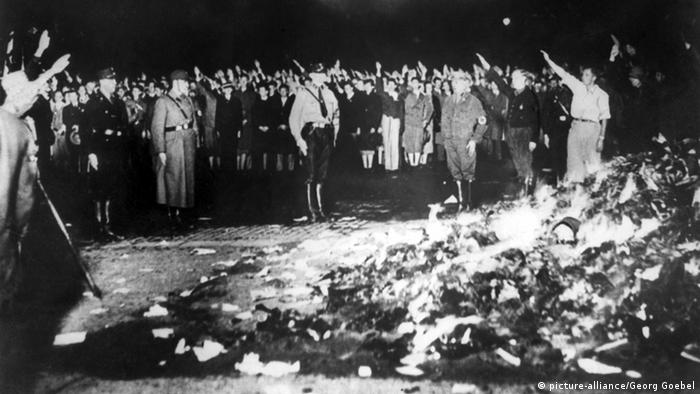 On the evening of May 10, 1933, some 70,000 people gathered at the Opernplatz in Berlin. Students had carted over 20,000 books to the public square, including works by famous German authors like Heinrich Mann, Erich Maria Remarque and Joachim Ringelnatz.

The Nazi student leader Herbert Gutjahr held a contemptuous speech. "We have turned our actions against the un-German spirit. I turn everything un-German over to the fire," he cried.

The seething bonfire below him was already swallowing up thousands of books as the 23-year-old threw another handful of volumes into the flames.

Scenes like this one played out all over Germany on May 10, 1933. In the cities with major universities, students burned works by authors who didn't uphold their racist ideology. Students had already spent weeks lugging condemned manuscripts out of the libraries. 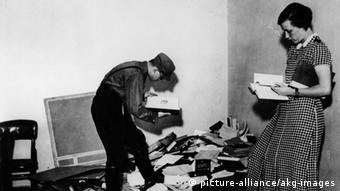 Books were collected for weeks ahead of the burnings

In their eyes, the books contained "un-German" thoughts, or their authors were considered enemies of National Socialism. Most of the authors were socialists, pacifists or Jews.

The students didn't have to fear resistance: Library employees and many professors went along with the emptying of their collections, even if they didn't all agree with it.

After the Nazis took power in January 1933, Adolf Hitler received dictatorial authority. That marked the beginning of his campaign to win the minds of Germans. The German Student Union, an umbrella group for all student organizations, announced in April 1933: "The state has been conquered! But not yet the universities! The intellectual paramilitaries are coming in. Raise your flags!"

With hardly any involvement from the Nazi party, the Nazi student organization took the lead and culminated their campaign with the book burnings on May 10.

The central book burning event took place at the Opernplatz in Berlin and was broadcast live on the radio. Many students arrived dressed in the SS or SA uniforms worn by the Nazis' paramilitary groups. A number of professors turned out as well.

Selected students threw books into the fire again and again as ideological proclamations were shouted into the crowd. One of the statements was: "Against decadence and moral decay! For breeding and convention in the family and state! I turn writings by Heinrich Mann, Ernst Glaeser and Erich Kästner over to the fire!" 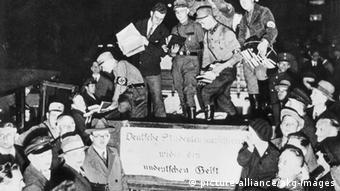 Thousands of books were carted to Opernplatz in Berlin

Erich Kästner, the author of internationally renowned children's books including "Emil and the Detectives" (1929), was present that night at the Opernplatz and bore witness to the hideous spectacle.

"I stood in front of the university, wedged between students in SA uniforms, in the prime of their lives, and saw our books flying into the quivering flames," Kästner later wrote. He concluded: "It was disgusting."

The main speaker arrived at midnight. Joseph Goebbels, the Nazi propaganda minister with a PhD in Germanic studies, spoke to the Berlin crowd and the short-wave listeners at home. "German men and women! The age of excessive Jewish intellectualism has come to an end, and the breakthrough of the German revolution has cleared the path for the German way."

Goebbels belied how much he mistrusted the students' self-organized campaign; at that point, he and Hitler were afraid of losing their grip on the Nazi movement.

The US magazine Newsweek called the burnings a "holocaust of books." Poet Heinrich Heine, whose works were also burned by the students, had written in 1821, "Where they have burned books, they will end in burning human beings." Heine's words were a prophesy that was tragically fulfilled: Mass murder of Europe's Jews began just several years later.

A land without poets and thinkers 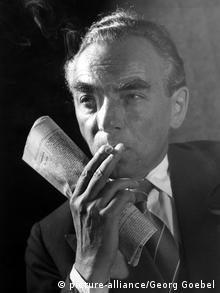 1933 marked the beginning of a mass exodus among Germany's intellectuals and artists. The nation that had often been admired abroad as the land of poets and thinkers had made it clear to its most talented minds that they were no longer welcome.

Writer Thomas Mann, Erich Maria Remarque and Lion Feuchtwanger were a few of the many intellectuals who fled Nazi Germany early. Mann, whose books landed in the bonfires on May 10, spoke to his fellow Germans on English radio broadcaster BBC later during the war. "It's a voice of warning - warning you is the only service that a German like me can do for you today," he said.

Authors who didn't emigrate, like Erich Kästner, were banned from publishing their works in Germany. By 1934, more than 3,000 publications had already been censored.

The majority of Germans, including many uncritical intellectuals and professors, quietly stood by as their country's creative talent went up in flames. Some even approved. Most troubling, however, is the key role students played in ideologically shaping the country.

For decades, the post-war German government negotiated with the US to obtain lists of former Nazi party members. New research shows that German diplomats may have intentionally delayed obtaining the information. (08.05.2013)

Anti-Nazi dissident Dietrich Bonhoeffer had a remarkable influence in contemporary Protestant theology. Inspired by his life, a multifaceted opera premiered at the German Protestant congress in Hamburg. (03.05.2013)