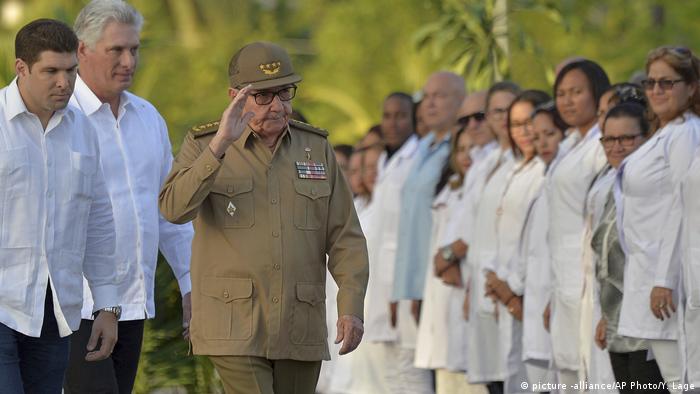 Along with his late, elder brother Fidel, the Castros led a rebel band in 1959 that overthrew US-backed dictator Fulgencio Batista and began a Communist experiment just 90 miles (144 kilometers) from the US.

The move set both countries on a collision course, as they engaged in decades of Cold War hostility.

Raul Castro delivered a speech in a sunset ceremony at a cemetery in the southeastern city of Santiago de Cuba, where both Fidel Castro and independence hero Jose Marti are buried.

Castro stepped down as president in April, 2018, but remains head of the Communist Party until 2021. He was replaced by current president Miguel Diaz-Canel.

"The youth will defend the revolution," Diaz-Canel said in a post on his Twitter account, where he honored the rebel fighters who "earned Cuba the title of Island of Liberty."

Continued confrontation with US

In his speech, Raul Castro blasted the administration of Donald Trump for reversing course on the historic opening between the US and Cuba that he and former President Barack Obama had engineered in 2014.

"Once again, the North American government is taking on the path of confrontation with Cuba," Castro said.

"Increasingly, high-ranking officials of this administration are ... trying to blame Cuba for all the region's ills," he said, adding that Latin America's problems were instead rooted in "ruthless neoliberal policies."

The 87-year old Castro said his country had proven throughout six decades of revolution that it could not be intimidated by threats. But he added that Cuba remained open to a peaceful and respectful coexistence.

Cuba's centrally planned economy, coupled with a series of external shocks, such as a decline in aid from Venezuela and devastation brought by hurricanes, have led to sluggish growth despite recent economic reforms.

Castro said that improving economic conditions, what he referred to as "the economic battle," was Cuba's most important issue. "We need first of all to reduce all non-necessary expenses and to save more," he said.

To achieve that, the 87-year-old communist party leader said the government needed to adopt "a more proactive attitude" and eventually become more "coherent, systematic and precise in its implementation of economic alignments," he explained.

In February, the regime is slated to submit a new constitution to a referendum. The document will officially recognize private property, markets and foreign investment.

But the new constitution also ratifies communism as the nation's "social goal," insists the country will "never" return to capitalism, and defines the Communist Party as by nature, single, and the "supreme political force of state and society.

The celebration of Latin America's longest-running leftist regime comes at a time when the region has seen the rise of right-leaning governments, the debacle of Venezuela, and on the same day as the inauguration of Brazil's far-right President Jair Bolsonaro.

Cubans became eligible to sign up for data plans on their smartphones. It is a long-awaited, and expensive, development on an island that limited mobile access to the Internet for most people. (06.12.2018)

In a censure of the United States, the UN General Assembly approved a resolution calling for an end to the blockade against Cuba. Cuba’s foreign minister called the embargo "a massive violation of human rights." (02.11.2018)