The reverse shift in US policy towards Cuba could hit US businesses that have poured into Cuba since 2014. But will it have the desired effect of pushing Havana towards political reform? 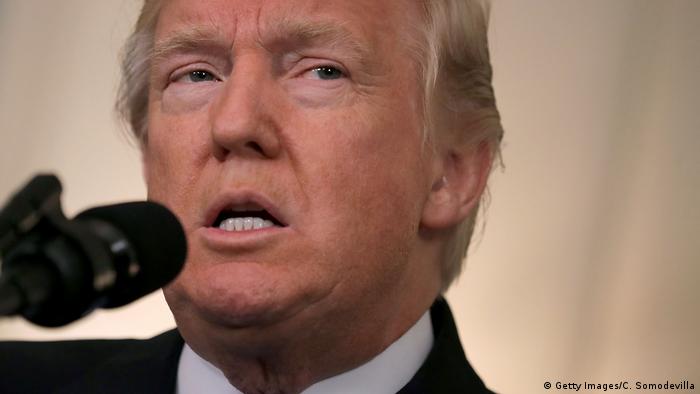 US President Donald Trump on Friday unveiled a new policy designed, according to a White House statement "to empower the Cuban people."

"With God's help, a free Cuba is what we will soon achieve," Trump told a cheering crowd in Miami’s Cuban-American enclave of Little Havana. "We will not be silent in the face of communist oppression any longer,"

"This is not directed against the Cuban people, but the Cuban regime," an earlier statement read. The aim, it said, is political and religious freedom and respect for human rights.

Business-to-business relations are still possible, as long as "they don't enrich the Cuban military complex," the statement read.

The Trump administration also called on the international community to support the renewal of sanctions said that future improved relations with Havana depended on Cuba taking "concrete" steps on political and economic reforms.

Trump said the US would not lift sanctions on Cuba until it released all political prisoners and respected the Cuban people's right to freedom of assembly and
expression.

In relation to human rights abuses, Trump said: "My administration will not hide from it, excuse it, or glamorize it and we will never ever be blind to it."

Senator Jeff Flake attacked Trump's new policy on Friday, saying that any policy change "that diminishes the ability of Americans to travel freely to Cuba is not in the best interests of the US or the Cuban people."

Flake warned that returning to a "get tough" policy that isolated the island would hurt everyday Cubans, whose livelihoods are increasingly rooted in travel and tourism.

He called on the Senate's Republican leadership to allow a vote on his legislation that would eliminate restrictions on travel to Cuba by American citizens and legal residents.

Cuba on the brink

Trump's move comes only three days after Cuba said it plans to hold elections in October, a precursor to the handover of power from President Raul Castro in 2018.

Castro has said he will step down next February at the end of his second five-year term, but has indicated he will stay on as head of the Communist Party, which is the only legal party in Cuba and has ruled the country since the 1959 revolution.

Castro's first vice president, the 57-year-old Miguel Diaz-Canel, is widely tipped to assume Castro's mantle, but there is also talk of a radical break with the older generation and an embrace of the market reforms that have been a feature of Castro's nine-year rule. But Trump's move could entrench hardliners in Havana.

The Cuban government has withstood the US trade embargo for more than a half century and will not make any political concessions to the US due to economic pressure, Carlos Alzugaray, a retired Cuban diplomat, told the news agency Reuters. "I am concerned it will affect the private sector quite a bit and much more than the Cuban government," he said. 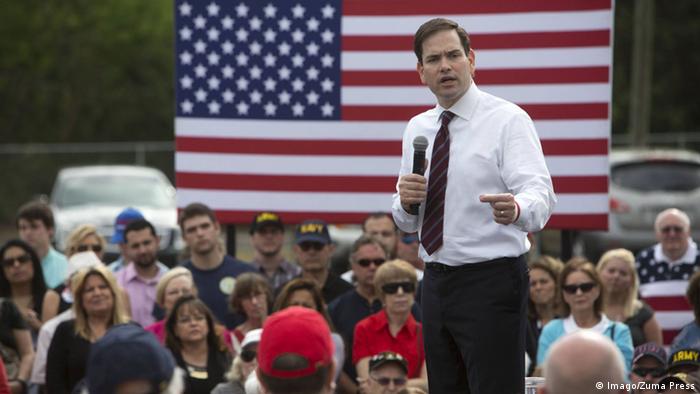 Marco Rubio speaks during a rally for Pinellas County voters outside Beckwith Electric in Largo, Florida.

Driven by US domestic politics

Campaigning in Miami - home to a large Cuban-American population - Trump pledged in 2016 to reverse Obama's efforts to normalize relations with Cuba unless it met certain "demands," including granting Cubans religious and political freedom and the release of all political prisoners. He went on to win about half the Cuban vote in Florida in the presidential election.

The son of a Cuban immigrant, Marco Rubio - a key figure behind the reversal - opposed Obama's re-engagement with Cuba, saying Obama was making concessions to an "odious regime."

US officials failed to answer why human rights concerns had led to the new measures in Cuba's case but were not playing a role in the administration's policy to other notable human rights offenders, like the Philippines and Saudi Arabia. 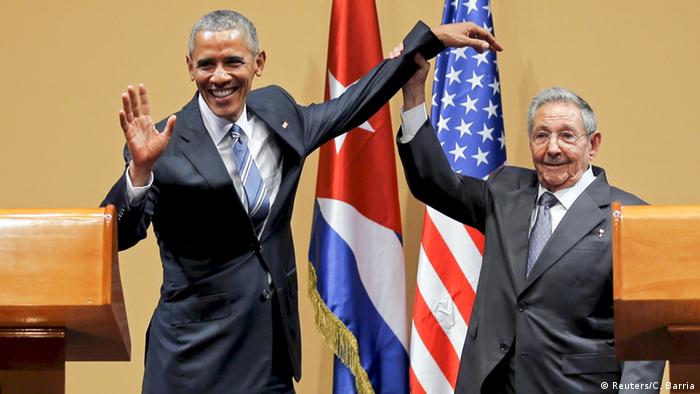 Former President Barack Obama's diplomatic re-engagement with Cuba after decades of estrangement culminated in an agreement with Cuban leader Raul Castro in 2014 and the restoration of diplomatic ties between their countries two years later.

Obama's opening to Cuba - which was negotiated in secret with the help of the Vatican - was one of his signature foreign policy achievements and ended an embargo that had lasted over half a century, but which had failed to soften the communist regime.

The shift sparked widespread euphoria in Cuba and raised hopes for an improvement in its economy. The rise in US visitors thanks to eased restrictions fuelled a boom in tourism, especially in Havana, creating demand for more restaurants, taxis and tour guides in the private sector. 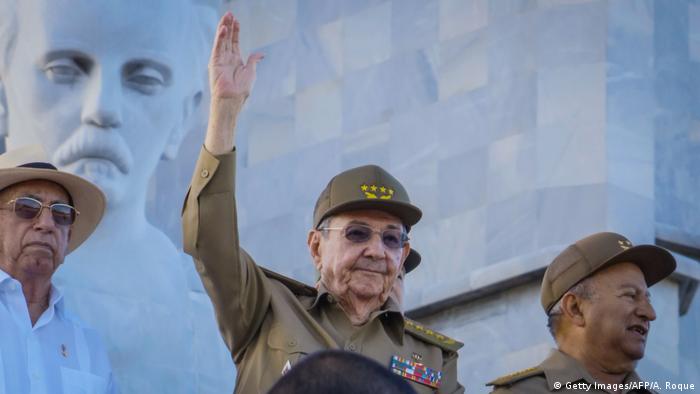 Cuban President Raul Castro at a military parade in honor of Fidel Castro at Revolution Square in Havana, January 2, 2017.

What stays the same?

Trump's move is only a partial reversal of Obama's policies and will give the US government the unenviable task of policing US travel to Cuba to ensure there are no transactions with the military-linked conglomerate, Armed Forces Business Enterprises Group, that runs much of the Cuban economy.

The embargo remains in place and unchanged. Only the US Congress can lift the embargo, and lawmakers, especially those with Cuban heritage, like Rubio, have shown no interest in doing so.

The US Embassy in Havana, which reopened in August 2015, will remain as a full-fledged diplomatic outpost. Trump is also not overturning Obama's decision to end the "wet foot, dry foot" policy that allows most Cuban migrants who make it onto US soil to stay and eventually become legal permanent residents.

There were also no changes to US regulations governing what items Americans can bring back from Cuba, including the rum and cigars produced by state-run enterprises. 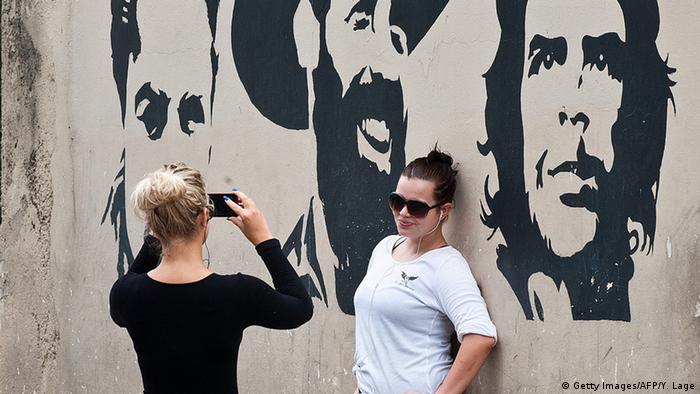 Tourists pose for pictures in front of graffitis of images of revolutionary leaders in Havana.

Most US travelers who visit the island will again be required to be part of organized tour groups - but run by American rather than Cuban companies. The number of Americans traveling to the island has nearly tripled in recent years and is expected to reach 400,000 in 2017, according to US travel agencies.

Critics say that by restricting individual US travel to Cuba the new policy also risks cutting off a major source of income for Cuba's private business sector, which the policy is meant to support. Many believe the changes would only hurt everyday Cubans who work in the private sector and depend on tourists.

The US plans to ban US financial transactions with the dozens of businesses run by the military-linked corporation Armed Forces Business Enterprises Group (GAESA), which operates dozens of hotels, tour companies, restaurants and other facilities.

Castro has been busy creating a state-sponsored oligarchy of which the Castro family and its cronies are in charge, with GAESA headed by General Luis Alberto Rodriguez, Raul Castro's son-in-law.

GAESA began in the 1980s as an effort to bring modern management to the civilian sector stuck in the ways of Soviet-style administration and has grown dramatically over the last decade since Raul Castro took over. The group has dozens of companies that control anywhere from 40-60 percent of foreign exchange earnings. GAESA's books, like those of other state-run companies, are not public.

At the center of the networks is a government organization called Grupo de Administración Empresarial, the "Business Administration Group," which operates state-owned companies accounting for about half of all business revenue in Cuba, including 40 percent of foreign currency earnings from tourism and imports.

Starwood Hotels & Resorts Worldwide, which is owned by Marriott International Inc, signed on to manage a Gaviota hotel in Havana under the Sheraton brand which opened in 2016. Gaviota is part of GAESA and tourism development projects in Havana and other choice locations are almost exclusively in its hands. All the state hotels, stores and eateries in colonial Old Havana are owned by Habaguanex, which was recently taken over by GAESA.

The holding company controls virtually all of the thousands of stores, supermarkets and malls in the country that sell imported products ranging from food and beverages to clothing and appliances, and hundreds of gas stations and eateries.

To rent a condominium or satellite TV service, you have to go through a GAESA company.

US Gulf Coast ports and the Port of Virginia, which have signed letters of intent to work with the new Mariel container terminal, may now have to look elsewhere for shipping partners as it is controlled by Almacenes Universales, another GAESA company. The terminal feeds a surrounding Chinese-style development zone which allows investors 100 percent ownership. It also is controlled by Almacenes Universales.

GAESA does not run Cuba's airports, or its cruise ship terminals, meaning US airlines and cruise operators might not be directly impacted, but it does control the marinas.

Barack Obama's government has warned Donald Trump's executive that reversing the warming of relations with Cuba would be "incredibly damaging" for the US and Cuba. Until 2014, diplomatic ties had been broken since 1961. (14.12.2016)

US President Donald Trump is set to reverse "Obama's policy of appeasement" toward Cuba, with new travel and business restrictions. With Cuba at a crossroads, some think the plan will further entrench the regime. (16.06.2017)