Croatian lawmakers have backed a treaty safeguarding women and girls in the face of right-wing and Catholic opposition. Critics of the Istanbul Convention argue that it will indirectly legalize gay marriage. 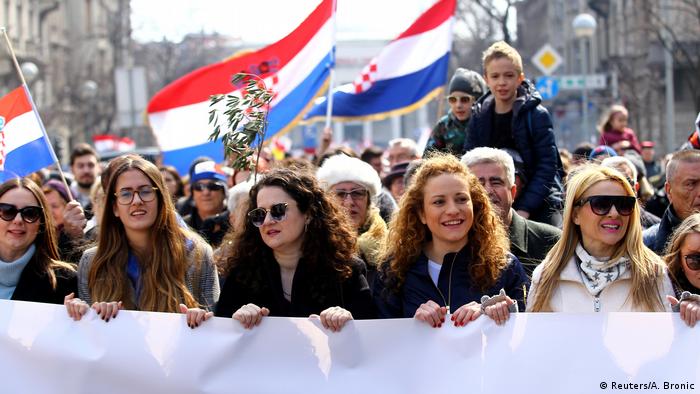 Opponents of the convention say it undermines Christian tradition

Croatia's parliament on Friday voted 110-30 in favor of ratifying the Istanbul Convention, the world's first binding treaty on preventing and fighting violence against women.

The convention, agreed in 2011, has now been ratified by 29 countries, including 18 European Union member states. Croatia became the bloc's newest member in 2013.

The treaty aims to be an instrument in combating domestic violence against women, protecting victims and prosecuting accused offenders. Among the forms of violence it seeks to counter are marital rape, stalking, forced marriage and female genital mutilation.

Thousands of Catholic Church-backed conservative protesters demonstrated in the Adriatic city of Split on the eve of the vote, urging parliamentarians not to ratify the convention.

They see the treaty, which speaks of gender as being socially determined and thus fluid, as possibly undermining traditional roles and opening the door to the legalization of gay marriage, which many in the country vigorously oppose.

The Catholic Church in Croatia, to which nearly 90 percent of the country's 4.2 million people belong, also campaigned against the ratification over the past weeks, labelling the convention a "heresy."

A protest against the treaty last month in the capital, Zagreb, drew some 10,000 people.

To placate critics, the government issued a separate statement saying the treaty would not change Croatia's legal definition of marriage as a union between a man and a woman.