A recent survey has found that most Germans are not bothered if their neighbor keeps an urn at home or buried in the garden. In most places in Germany it is still required for human remains to be buried in a cemetery. 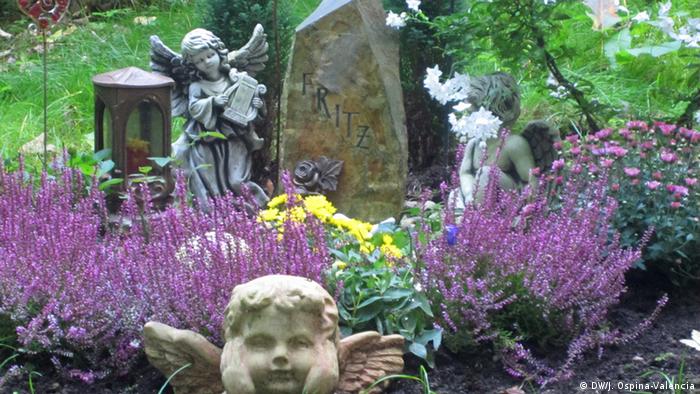 Burying a loved one's cremated remains in a garden at home instead of in a cemetery is no longer a taboo in Germany, reported German consumer initiative Aeternitas on Wednesday.

The recent survey of over 1,000 people found that 83 percent of the respondents "would not feel uneasy if their neighbor has an urn," the report on burial "trends" read.

According to previous data, 15 years ago, only 57 percent of respondents said they were fine with ashes nearby, while only three years ago 65 percent reported the same.

The data shows a huge jump in public acceptance of keeping urns at home. However, despite ongoing debates over Germany's legal burial requirements, it is still illegal in most places to keep cremated remains at home or to scatter them outside of a cemetery.

When it comes to barring citizens from keeping ash remains at home "the judiciary uses outdated values which cannot withstand a critical review," said Aeternitas' lawyer Torsten Schmitt in the report.

Germany's stiff burial regulations have started to loosen up in recent years. The city-state of Bremen allows citizens to keep ashes in the home, for example.

The survey also found that Germans are split when it comes to shared graves for humans and their pets.

Germany: Together for eternity

With 49 percent of respondents saying they were in favor of this possibility just 48 percent were against. Younger people were most in favor of the shared plots, while those over 60 strongly disagreed.

When it comes to the subject of sustainable and ecologically-friendly funerals, the poll showed that a slight majority, 54 percent, believe such practices are important.

A burial ground for lesbians in Berlin

Berlin now has its first lesbian burial ground, launched by a German organization for older lesbians, to remember the dead and celebrate living lesbians. Not every gay woman wants to be buried there, though. (22.04.2014)

In a protest against the EU's refugee policy, the art collective "Center for Political Beauty" claims to have exhumed the body of a refugee in Italy who died in the Mediterranean. The remains were reburied in Berlin. (17.06.2015)