Creative or shocking? German art in Paris | Europe| News and current affairs from around the continent | DW | 22.04.2013

The exhibition "De l'Allemagne," on view in Paris, is meant to symbolize Franco-German friendship. The Germans, however, are not happy and feel they are being misrepresented in the artwork. 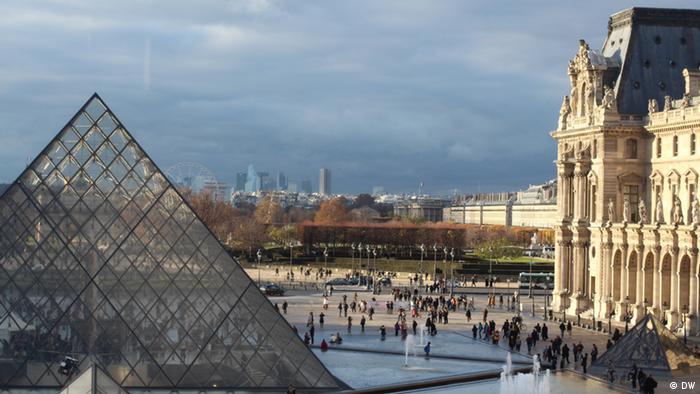 At the Louvre in Paris, two names are visible on a woodcarving in the entrance hall to the German exhibition: "Madame de Staël" and "Heinrich Heine." The former is French.

In the early 19th century, Madame de Staël traveled to Germany, where she wrote the book "De l'Allemagne," reporting from and about Germany and giving Germans advice on what they might learn from the French. The latter, German poet Heinrich Heine, responded from his exile in Paris. The French author and the German poet did not always see eye-to-eye. 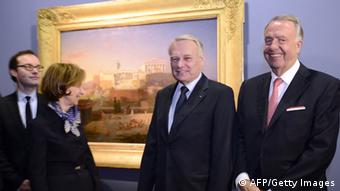 The artwork in the Louvre entrance hall is one of 10 extra large wooden panels by German artist Anselm Kiefer. The exhibition is entitled "De l'Allemagne - German thought and painting from Friedrich to Beckmann."

It is a Franco-German collaboration, designed as a project in celebration of 50 years of German friendship and the Elysee Treaty. The exhibition opened in late March and has since become a matter of conflict between the two countries.

French critics are enthusiastic, while German newspapers appear alienated, if not outright shocked. They feel the Louvre is showing paintings of an abysmal country "rocked by stark somber powers" that, via the Romantic period, was "more or less headed straight for National Socialism." German critics say the exhibition confirms every stereotype of the romantic, but simultaneously dangerously dark neighboring country.

"An exhibition about Germany does not mean you say everything about Germany," says Danièle Cohn, a professor at Sorbonne University and one of the show's curators, adding that the intention was to give the French, who know little about German painting, a broad overview of German art history.

"We want people to ask questions about an art history that is so close to us and still so far away," Cohn told Deutsche Welle.

"For us, German art is anything but somber," added Louvre chief curator Sébastien Allard.

The Germans and patriotism

The exhibition comprises more than 200 works. They span the years 1800 to 1939 and are separated into three distinct chapters. The first is dedicated to Germany's difficulty in finding a national identity - which developed surprisingly late compared to France. The paintings show how Germans at first dreamily gaze at Italy and Greek antiquity. Using the theme of common fairy tales and legends, other paintings show that the many individual German states established unity. 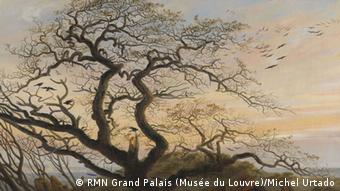 All this "dark twilight of the gods and demons crawling around all over the place" is unnerving, Carsten Greve said. The Cologne art gallery owner criticized what he regards as the exhibition's "negative tendency." It would be "absolutely dreadful" if the issue of nationalism were to rise to the surface again - after all, "art is global art," said Greve, who has run a branch gallery in Paris for 24 years.

The exhibition's second chapter shows the turn to nature; in particular, with Caspar David Friedrich, one of the most significant painters of early German Romanticism. His panoramic views of German mountain ranges, or the Baltic Sea, are known around the world. These hazy yet grand landscapes, however, can also easily be interpreted as stereotypes, especially because Friedrich is one of the few artists who have been shown more often in France, Carsten Greve pointed out.

From Romanticism to Nazism

Finally, the third chapter is dedicated to the era between the two world wars, and culminates in, of all things, Leni Riefenstahl's Nazi propaganda film on the 1936 Berlin Olympics.

"Why is there no Bauhaus?" Carsten Greve wonders. The school of art is famous for its concepts of applied arts, Greve said, and is "one of the greatest democratic developments of the 20th century." 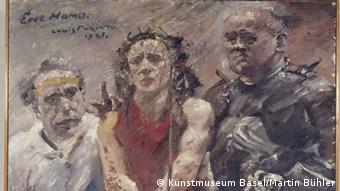 Too much gloomy and somber art, critics say

Other artists include Käthe Kollwitz, Otto Dix and Otto Sander, artists who came to terms with the horrors of World War I in their works, and already saw the second war approaching.

"I understand that a renewed discussion about National Socialism can be awkward for Germans," Danièle Cohn said. "But it should not be annoying." After all, Cohen added, the Louvre had something completely different in mind with the third room: the fact that German artists grappled with humanity in the years between the wars.

Concluding the exhibition with art from 1939 was an attempt to choose a date important for all of Europe, the French curator said. She and her colleagues made a deliberate decision not to choose 1933 and Hitler's seizure of power as the end of the timeline.

The debate about the impact of this exhibition shows how tense political ties are between Germany and France. It also shows to what extent Germans fear, in the midst of the euro crisis, to be perceived once again as the aggressors. At a time when Chancellor Angela Merkel is depicted on Greek front pages with a moustache likening her to Hitler, it would seem Germany does not need an exhibition that might give the country a negative image in art, too.

Meanwhile, German and French visitors flock to see the show, and they seem to take it less seriously. Perhaps, they get together for a glass of beer or wine afterwards to discuss the exhibition - as friends, like Madame de Staël and Heinrich Heine.

On Friday, Germany's oldest art fair, Art Cologne opens its doors. The artists showcased there belong to the world's elite. But for the vast majority, the path to success on the art market is tough and unyielding. (18.04.2013)