COVID vaccine: Moderna shots can be 6 weeks apart, WHO says

Although the recommended interval between doses is 28 days, that time can be extended in countries facing limited supplies. The WHO also said the jab should not be used on pregnant women unless they are in a risk group. 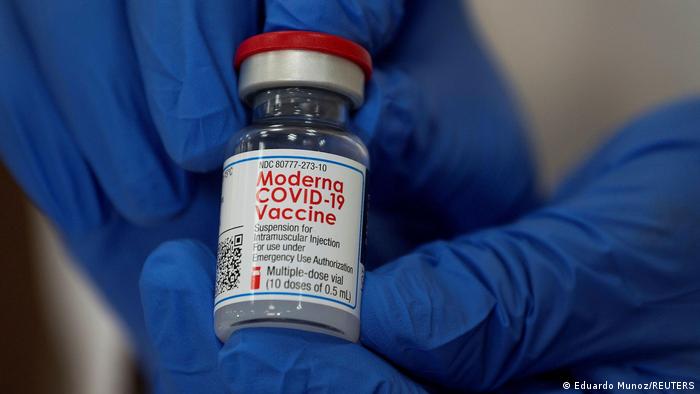 The World Health Organization on Tuesday backed delaying second injections of the Moderna coronavirus vaccine by up to six weeks in some situations, as they have already done for the BioNTech-Pfizer jabs.

Both vaccines require boosters after three to four weeks, but several countries facing limited vaccine supplies have said they will delay administering the second injection so that more people can get the first dose.

An interval of 28 days between doses is the most highly recommended time span, but the WHO has said that boosters can be delayed by up to 42 days if necessary.

The WHO's Strategic Advisory Group of Experts on Immunization (SAGE), issued the series of recommendations on Moderna, several weeks after issuing their guidance on the rival BioNTech-Pfizer shot.

"The main recommendation for the use of this vaccine is that based on the current elements we recommend it should be given in doses of 100 micrograms or 0.5 ml with an interval of 28 days," Alejandro Cravioto, panel chair, told a news briefing in Geneva.

"This interval might be moved to 42 days but the evidence we have does not go behond that time," he said, speaking from Mexico.

Uncertainty over effect on pregnant women

The organization additionally said that the vaccine should not be used on pregnant women unless they are healthcare workers exposed to the virus, or have medical conditions putting them at high risk. Clinical trials, SAGE said, still needed to be conducted with pregnant women.

"There is no reason to think there could be a problem in pregnancy, we are just acknowledging the data is not there at the moment," said WHO director of immunisation Kate O'Brien.

Experts also said that international travelers shouldn't receive priority for any vaccinations for the time being. SAGE has also planned to release a review of the AstraZeneca vaccine on February 8.

"Reviewing the data from AstraZeneca, and we have tentatively - I have to underline tentatively - scheduled a
meeting of SAGE to discuss policy recommendation on February 8th," said Joachim Hombach, executive secretary of SAGE.