A court in Angola has ordered the bank accounts of ex-President Jose Eduardo dos Santos' daughter to be frozen. An anti-corruption drive launched by his successor has targeted the former first family's assets. 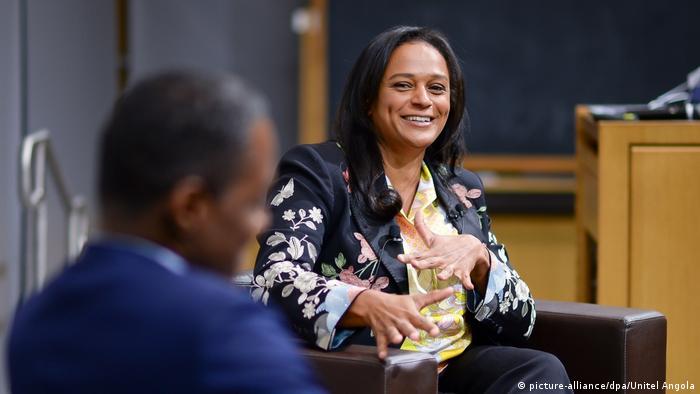 Angola's public prosecutor said on Tuesday that bank accounts held by Isabel dos Santos, the daughter of former president Jose Eduardo dos Santos, have been frozen in accordance with a court order.

The court was acting in a graft investigation looking at alleged irregularities involving state companies, including the oil giant Sonangol which Isabel dos Santos used to run, and a diamond-marketing firm, Sodiam.

"The state through its companies ... transferred enormous quantities of foreign currency to companies abroad whose beneficiaries are the defendants, without receiving the agreed return," the court said in its order, dated December 23.

"The defendants recognize the existence of the debt but allege that they do not have the means to pay," the statement added.

Nicknamed Africa's wealthiest woman, Dos Santos is being investigated with her husband Sindika Dokolo in a corruption affair involving more than a billion dollars.

As well as bank accounts, their holdings in several Angolan companies have also been frozen.

Dos Santos amassed a fortune through stakes in Angolan companies including banks and telecoms firm Unitel, earning her the nickname "the Princess."

She chaired Sonangol — the lynchpin of Angola's flagging, oil-dependent economy — before being sacked by her father's successor, President Joao Lourenço shortly after he took office in 2017.

Court documents state that the pair, along with Mario da Silva, chairman of Banco de Fomento Angola (BFA), had caused the state losses of more than $1 billion.

The order said the central bank would ensure that no funds leave the personal bank accounts of the three accused.

Read more: As Angola decriminalizes homosexuality, where does the African continent stand?

Lourenco ended Jose Eduardo dos Santos' nearly 40-year grip on power in 2017 and has been trying ever since to reduce the influence of the former first family, recover lost assets and privatize state firms.

The ex-president, meanwhile, accuses his successor's government of persecution.

Isabel Dos Santos has since left Angola — along with several other members of the family — because she claims she has faced death threats.

She has previously denied wrongdoing during her father's time in office.

He is accused of embezzling as much as $1.5 billion from Angola's sovereign wealth fund during his 2013-2018  stewardship.

Despite extensive oil, gas and mineral reserves, the majority of Angolans live in poverty and continue to rely on subsistence agriculture.

A new dawn appears to be on the horizon as Angolan President Joao Lourenco prepares to replace former head of state Eduardo dos Santos as leader of the ruling MPLA party. But the path to reform is paved with obstacles. (07.09.2018)