A court in Germany kept in place a ban on the more explicit passages of a satirical poem about Turkey's President Erdogan. Comedian Jan Böhmermann caused a diplomatic row when he read the poem on his TV show last year. 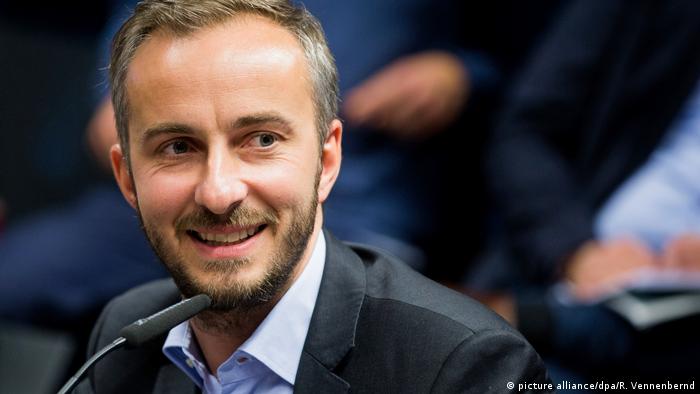 A Hamburg court delivered its verdict on German comedian and television presenter Jan Böhmermann on Friday, nearly a year after his satirical poem criticizing President Recep Tayyip Erdogan upset the leader in Ankara and led to a diplomatic row. A ban on the re-publication of the most offensive passages will remain in place.

In March 2016, a separate video mocking the Turkish leader made Erdogan so furious he summoned the German ambassador to Ankara. A few days later, Böhmermann cited Erdogan's array of lawsuits in Turkey and further afield against perceived "insults," and said that he had written a poem designed to demonstrate the difference between legitimate criticism and simple slander.

On his late-night show "Neo Magazin Royale," the comedian then read the poem which not only criticized Erdogan for human rights abuses and increasingly autocratic tendencies, but was sprinkled with expletives and graphic sexual references.

In the banned parts of the poem, Böhmermann made references to child abuse, bestiality and government persecution - mixing wild stereotypes with more valid complaints specific to Turkey.

An irate Erdogan tried and failed to prosecute with the help of Germany's government, making use of a law against insulting foreign heads of state. This case failed, but Erdogan continued to pursue the civil suit, seeking a ban on the circulation of the poem. The same Hamburg court had already prohibited certain parts of the poem from being published.

Both sides had said they would appeal the verdict if they lost, but so far Böhmermann has made no comment as to whether he'll follow through.

Merkel: Apology was a 'mistake'

Chancellor Angela Merkel faced criticism over the case, less for ordering public prosecutors to investigate a potential violation of the law, but rather for her apology to Erdogan for Böhmermann's actions. Merkel later walked back her apology after hefty criticism, calling it a "mistake."

After investigating the case and interviewing Böhmermann, public prosecutors later announced that there was insufficient evidence to pursue a criminal case against the comedian.

Germany then moved to repeal the relevant passage of the law altogether, announcing in January that it would scrap the measure offering special protection to foreign leaders by the end of 2017.

"The idea of lese majesty arose in an era long gone by. It no longer belongs in our criminal law," said Justice Minister Heiko Maas, adding that foreign leaders with hurt feelings still retained the right to pursue civil suits for slander or libel.

German comedian Jan Böhermann has defended his now infamous "defamatory poem" as a joke in his first statement since the investigation against him was dropped. He also heavily criticized the Turkish government. (05.10.2016)