You don't often see cowboy boots in Berlin. But when DW's Sertan Sanderson heard the German capital had an annual country music festival, he grabbed the chance to dust off his pair and do a little Western line dancing.

The event bills itself as "the pilgrimage site of country music in Europe" and includes musical performances covering the spectrum of country sound, including country rock, bluegrass, Cajun, and southern rock, to name a few.

It's clear that people take the CMM pretty seriously. Many wear top-of-the-line Stetson cowboy hats, real cowboy boots from the USA, leather jackets with plentiful fringe. Some of the ladies go the whole hog with frilly dresses and petticoats that seem to have jumped straight out of the 19th century.

In the maze-like corridors and passages of the Fontane House, exhibitors are selling everything from country music CDs to boots and western jewelry. There's a merchandise stand to gladden every cowboy heart and complete the perfect Wild-West outfit. 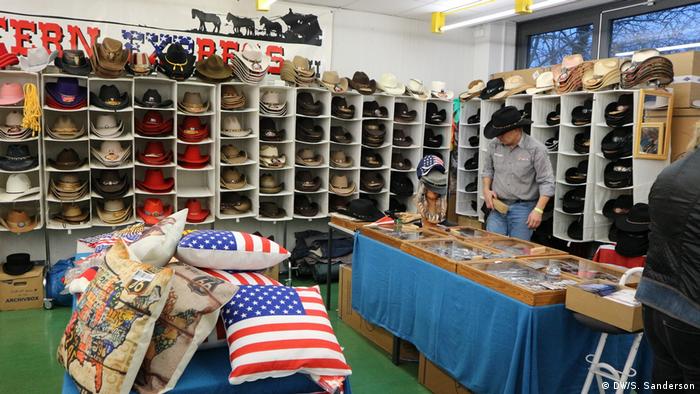 We're not in Kansas any more…

Every year, country fans come from all over Germany, and even from neighboring countries, to visit this country-music extravaganza, dance the two-step and belt along to Johnny Cash songs at the top of their lungs.

Anita Geisendorfer has come here to kick up her heels, traveling all the way from Bavaria in Germany's south. And she's certainly dressed for the occasion. I feel distinctly underdressed, my cowboy boots being my only concession to the style of the day. 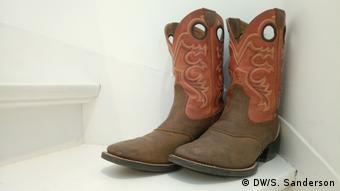 The author's cowboy boots are the real Texan deal

"During the year we go to many similar events," says Geisendorfer, a country music convert who's spent the last ten years traveling all over Germany and meeting up with other country fans. It's obvious she's in her element. "Germany has a massive country scene," she says, as she straightens the ruffles on her dress.

"In Bavaria we're used to getting dressed up to fit with different kinds of music. We also wear dirndls," she explains, referring to a traditional dress for women that is commonly associated outside of Germany with Oktoberfest and its blaring brass bands.

Folk music on another level

On the main stage, the Swedish band Sentiment Falls is rocking the crowd with their contemporary country sounds. The audience seems to be enjoying it, some spontaneously breaking out their best line-dance moves. One could be almost be at a barn dance or a country hoedown in Alabama. But instead of spicy spare ribs and juicy steaks, the culinary offerings are limited to well-known German classics: currywurst and large doughy pretzels. At least the Jack Daniels is flowing freely. 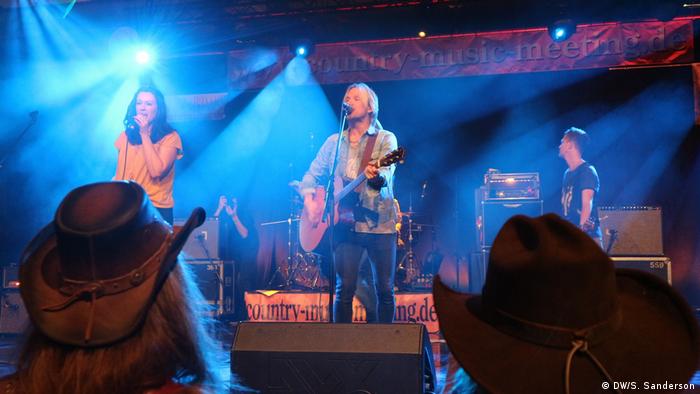 At one of the stands outside the auditorium, a band calling themselves The Forgotten Sons of Ben Cartwright are on the stump. The group comes from Lower Saxony, but its name alludes to the 1960s American western TV show Bonanza. They play cover versions of country golden oldies to tug at audience heartstrings. The fun factor is the band's driving force, says Kay Dee Cartwright, one of the founders of the band.

"We're a country party band, and we play music that people like to dance to and to listen to when they party," he says. "In a way, country music is a form of folk music. But German folk music doesn't really speak to us, so we like to lean more towards America."

Read more: Winnetou: Why so many Germans fell in love with the unrealistic 'Indian' 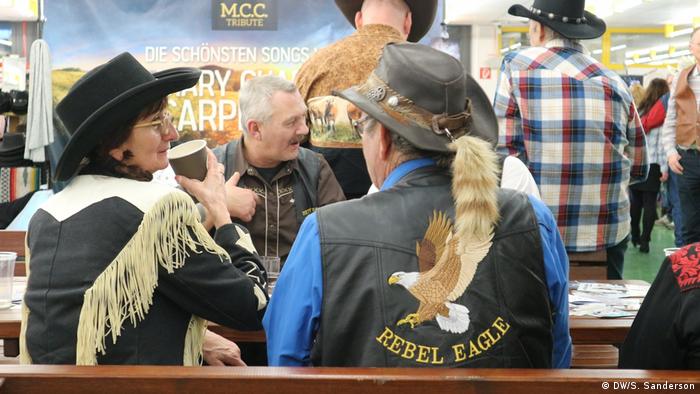 When choosing a outfit, it's no holds barred for German country music fans

Marion Freier feels the same way. She's one of the organizers of the the CMM and a fully fledged country fan. The event manager and DJ has spent months planning this three-day event with her team. For the 56-year-old, country is more than just music or work; it's a complete lifestyle.

"Country music is one of the few music types that you can really listen to all day, without getting aggressive, because it's very complex," says Freier. "There are rock influences, acoustic elements, there's something fast in there, and then there's also slower moments."

Freier emphasizes that she believes country also has a legitimate home in Europe. 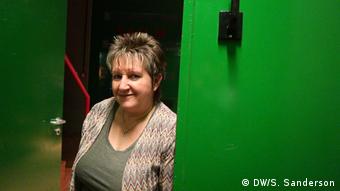 CMM organizer Marion Freier has yet to travel to the US

"Country music is also very much loved in Europe. Only a very few people know that, because the media treats the genre like an unloved stepchild," says Freier. "There are an amazing number of live music events, clubs, line-dancing clubs and courses. And that's not just in Germany but across the whole of Europe — it's very big in Scandinavia, Great Britain, the Benelux countries. One just has to know where to find it."

But, with 30-year-old country singer Kacey Musgrave recently roping the 2019 Grammy Award for album of the year, perhaps it's a sign that the genre is beginning to reach wider audiences, especially outside the US.

Freier, who particularly enjoys the music of country superstar George Strait, admits that she has only enjoyed her American passion from the other side of the Atlantic.

"I have worked with many, many musicians from the United States here in Germany. But I haven't managed to travel over there," she says.

Next year will be the tenth year of the CMM. Maybe that will be the trigger for Freier to finally make the pilgrimage to the USA. She wants to visit the home of country music, Nashville, Tennessee, and also to travel around Texas.

But meanwhile, German country-music fans don't need a passport or a visa to live tout their American dreams. They're happy to have it all at home, surrounded by their mother tongue, and ready seasoned according to the German palate.

Perhaps best known for his infectious hit "Rhinestone Cowboy" and role as a gunslinger in the John Wayne movie, "True Grit," singer Glen Campbell heavily influenced the music world before his death at the age of 81. (09.08.2017)

Country is one of the most popular music genres in the world. But there's much more to country than boots and your achy-breaky heart. Here's a who's-who primer for those who might be novices to two-step and line dancing. (11.02.2019)