Coronavirus: The psychology behind panic-buying | Science | In-depth reporting on science and technology | DW | 11.03.2020

Coronavirus: The psychology behind panic-buying

People are bulk-buying toilet paper, pasta, soap, tinned foods and disinfectant. Those who have come away empty-handed are asking themselves why so many people panic-buy? DW asked INSEAD's Andy Yap what's behind it. 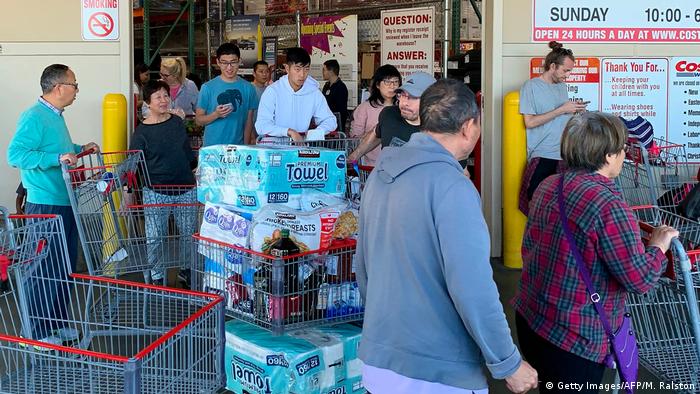 DW: Why are people panic-buying?

Andrew Yap: The coronavirus is an invisible enemy. It's something that we cannot see. And, when you cannot see your enemy, what happens is that you lose this sense of control. And when you lose your sense of control, you try and do things to compensate and achieve control again. Buying certain things is one way for you to do that.

If I were to go to the supermarket right now and buy something, would it make me feel less fear about the coronavirus?

What we find in our research is that, if you lose the sense of perceived control, you start buying things to help you solve the problems that caused you to lose control in the first place.

What people end up doing is they buy masks, they buy hand sanitizers, they buy cleaning detergent to clean their houses and offices, and so on.

So it doesn't matter whether these measures are effective. If I buy something, I just feel better, I feel safer.

You mentioned research. What kind of scientific studies have been conducted on fear and panic and how people react?

So about three or four years ago we wanted to study what happens when people experience stress and anxiety. And we realized that a fundamental element that people hadn't examined is this state of control, or the sense that they lose control. And so we ran a number of experiments in the supermarket, lab experiments.

If control is so important for people, especially in this atmosphere of fear, how would you help our readers restore that control?

One is, you need to get information. You need to be educated and understand what's happening, what the virus is about, how the virus causes you to be infected, the ways you can be infected, how you treat this viral infection.

But I wouldn't ask to you to spend a lot of time on social media, because social media is an echo chamber. One of the reasons you see a lot of panic-buying is because people are watching and seeing photos and videos of people buying toilet paper, all sorts of things, things that are running out. And that led to a lot of cases of panic-buying across the world.

We didn't quite see the same behavior back when there was SARS, which was a similar viral infection, a similar pandemic. There was less panic-buying then, because people didn't have this echo chamber in their palms.

Andy Yap is an assistant professor of organizational behavior at INSEAD Business School in Singapore.

Coronavirus scare: When will 'hamsterkauf' become an English word?

Supermarkets in Germany have witnessed signs of panic buying as the new coronavirus spreads. Some English-language media are in love with the special word the Germans use for hoarding stuff, as Hardy Graupner found out. (05.03.2020)