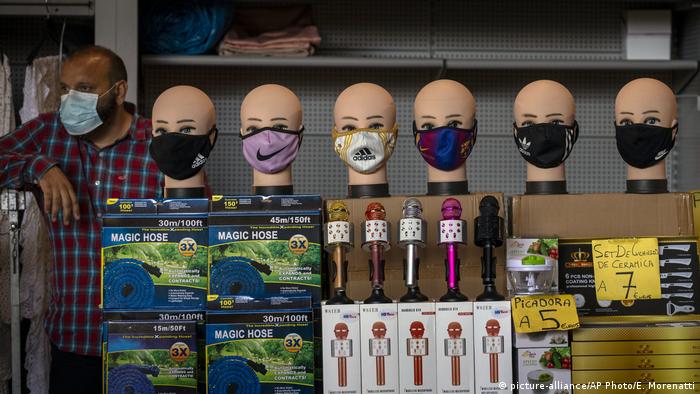 An order making face masks fully mandatory in public went into force in Spain's northeastern region of Catalonia on Thursday, with those violating the regulation facing fines of €100 ($113).

The order was announced on Wednesday, four days after more than 200,000 people in the Segria area were placed under lockdown following a number of coronavirus outbreaks there.

Masks are mandatory across all of Spain in shared indoor spaces and outdoors as well when 1.5 meters (5 feet) of physical distance cannot be maintained, but Catalonia is the first region to make the wearing of masks compulsory in all situations regardless of distance.

Shortly afterward, the Basque town of Ordizia also imposed a similar regulation after a cluster of nearly 50 cases was discovered there.

Decline in face mask use

Catalonia, which has a population of 7.5 million, has seen the biggest increase in confirmed new cases of any region in Spain since a nationwide lockdown was lifted in mid-June.

Health authorities in the region have warned that hospitals are filling up and could soon be overwhelmed.

Officials said the tighter measures were aimed at combating a noticeable decline in the use of face masks by some citizens.

Spain is one of the worst-hit European countries, with nearly 270,000 infections and more than 28,000 deaths.

After initial doubts on the part of some health authorities, the wearing of face masks in public is now considered an important measure in stemming the spread of the coronavirus, which has killed at least half a million people worldwide.

The coronavirus crisis has hit young people in Spain with full force. An emergency work program is at least in place in some tourist spots to help some through the summer. Jan-Philipp Scholz reports from Andalucia. (05.07.2020)

Is that a smile, a grimace or a mocking grin? Thanks to the coronavirus, many parts of the worlds are beginning to get used to wearing a protective face mask. Suddenly, we're having to use our eyes more to communicate. (22.05.2020)