Some 200,000 people living in the northeastern Catalonia region have been given new stay-at-home orders. Spain's tourism and hospitality sectors are struggling to rescue what remains of the summer season. 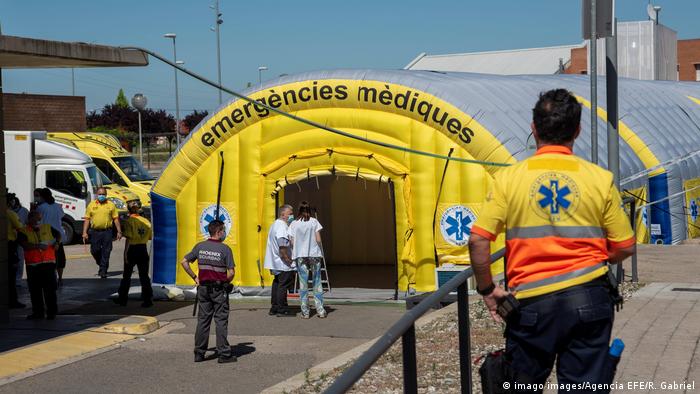 Authorities in northeast Spain on Saturday ordered the lockdown of El Segria county around the city of Lleida, home to over 200,000 people, after health officials recorded a jump in 60 cases in 24 hours.

The quarantine began Saturday at 12 noon (1000 GMT) and residents of the now quarantined region had until 4 p.m. local time (1400 UTC/GMT) to return to their place of residence.

After that, no one was authorized to travel or leave Lleida and surrounding communities in the west of the province except to go to work.  Police set up checkpoints on access roads.

Health ministry data registered 4,030 infections in the region on Friday — 60 more than on Thursday. There were a total of 365 cases during the week. Twenty-eight people with COVID-19 were treated in hospitals, six of them in intensive care units.

A complete lockdown within the quarantine zone has not yet been necessary, Spanish newspaper La Vanguardia quoted Catalan Health Minister Alba Verges as saying.

Gatherings of more than 10 people would be banned but Verges urged people to avoid meetings and to limit or postpone family celebrations.

According to the local newspaper La Provincias, most cases are connected to retirement homes, a residential area, and rural agricultural workers.

At the peak of the outbreak in April, fearing that a shortage of workers would leave fruit rotting in the trees, farmers' unions and business associations advertised jobs that have attracted many more applicants than expected.

Lleida Deputy Mayor Sandra Castro called the situation the "perfect storm" for a "social crisis on top of the ongoing health crisis."

The new lockdown comes as Spain's tourism and hospitality sectors were hoping to attract last-minute visitors during the prime summer season.

Spain is one of the countries in Europe worst hit by the coronavirus pandemic, with more than 250,000 recording infections and 28,300 deaths.

Thousands of Germans are traveling to Mallorca as part of a pilot project before Spain officially reopens its borders on June 21. What kind of vacation is possible during the coronavirus pandemic? (17.06.2020)