Coronavirus: India will take ′years′ to recover from unemployment crisis | Asia | An in-depth look at news from across the continent | DW | 17.09.2020 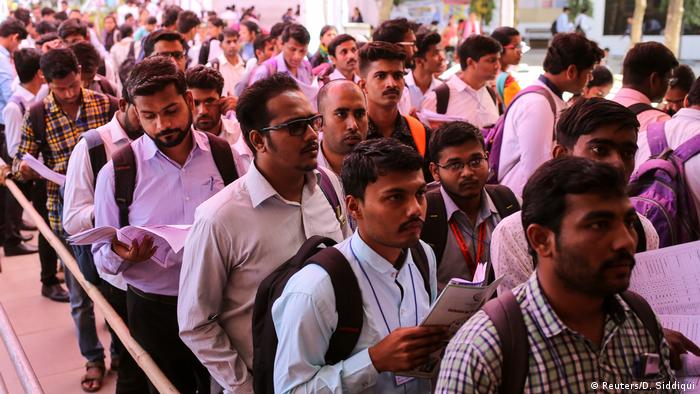 India's massive work force is being hit hard by coronavirus. As many as 21 million salaried jobs have been lost between April and August, according to a recent report by the Centre for Monitoring Indian Economy (CMIE). Economists say a swift recovery looks unlikely.

The job losses cross sectors and skill levels, and include services, manufacturing and industry, and white-collar jobs, the report said.

"I was asked to go on leave in May during the pandemic because there was no work in the real estate sector.  A month later, I was fired," 27-year-old Rohit Kansal, a sales executive, told DW.

Hospitality, aviation, media, entertainment and automobile parts manufacturers are among the sectors seeing the most job cuts.

"I have had to acquire new skills, although my main strength is engineering. Now, I have taken a drastic pay cut and work in the communications department," Manas Kumar, an employee at an automobile company, told DW.

The informal economy is also feeling the heat with thousands of small-scale traders and hawkers shutting shop.

The CMIE, an independent think tank that hosts the largest database covering the Indian economy, said India's economic downturn is putting pressure on government finances, as revenues fall short of projections and Indian states struggle to pay their bills.

Government figures show that India's GDP contracted by 23.9% from April to June, as coronavirus lockdowns brought key industries to a halt and rendered millions of people jobless.

Construction output dipped by 50% and manufacturing output contracted by 40%. Economists and academics maintain the pandemic and consequent lockdown, laid bare the fragility of India's formal job market, which has collapsed.

"This situation is really distressing, because our demographic dividend, which was never quite properly exploited, is now getting into a very different kind of a logjam. This has long-term implications for India," Mahesh Vyas, CEO of CMIE, told DW.

"Youngsters were supposed to get jobs, engineer the growth rate, and save for the long-term. All of that is kind of lost," he added. With nearly 10 million youth entering India's job market annually, the downturn does not bode well for their economic future.

Other economists said the current number of unemployed does not take into account millions who have joined the agricultural sector as jobs dried up in the rest of the economy.

While these people are officially counted as employed, the loss in wages and buying power could constitute "disguised" unemployment.

"The critical issue in India is that the normal employment calculating methodology has broken down in the midst of pandemic," political economist M K Venu told DW.

"Surveys show out of an employable workforce of 520 million, nearly 35 to 40% (or up to 200 million workers) may be underemployed with no real work, or employed but earning 50% or less of their former salary in urban centers," he said.

"This is a peculiar situation because the official unemployment rate is around 8%, but this does not take into account massive underemployment and people claiming to be employed but with half or less salary."

"This job shedding will linger for a long time. Unemployment is much higher than actually projected and the stimulus plans of the government have simply not addressed the issue," labor economist Praveen Jha told DW.

Unemployment in India has been a problem since 2017-18, during which a 45-year-high of 6.1% was recorded by the National Sample Survey Office's periodic labor force survey.

At that time, unemployment was higher in the city than in rural areas, which indicates that salaried, white-collar employment has been sluggish in India for at least three years.

India's current recession is widely expected to run through the second half of the fiscal year, as the continued spread of the coronavirus weighs heavily on demand and hinders an upturn in economic activity.

Labor economist Santosh Mehrotra, former chairperson of the Centre for Labour Studies at Jawaharlal Nehru University, said job recovery to pre-pandemic levels should not be expected until at least 2023-24.

"The pandemic has only made a sluggish economy worse and hastened the downslide," Mehrotra told DW.