Germany has recorded its lowest daily number of new coronavirus cases since September last year. As restrictions are gradually eased, calls are growing for some mask rules to be lifted. 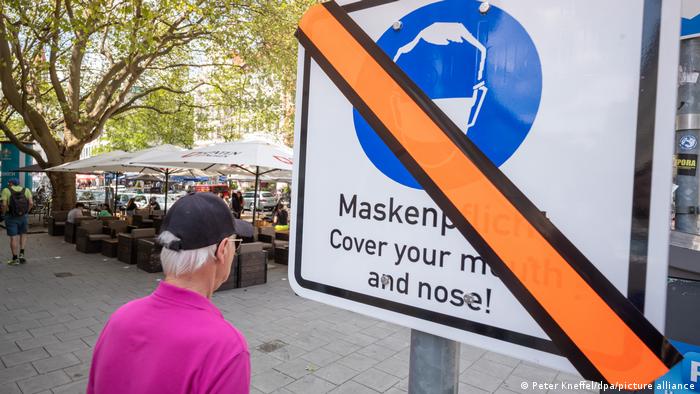 With declining infection rates and an area-by-area relaxation of restrictions, calls are mounting for face mask-wearing rules to be reexamined.

It's the first time since last September that the figure reported by the Robert Koch Institute for disease control has been under 1,000.

Although figures reported are typically lower for the weekend because fewer tests are conducted, the number of new cases has declined sharply in recent weeks.

With some 40 million people in Germany having received at least one shot of coronavirus vaccine — nearly 50% of the population at least partially inoculated.

As the number of infections drop in states across Germany, restrictions on gatherings, gastronomy, sports and culture are being lifted. The fall in cases has also prompted a debate about the scope for mask-wearing rules to be relaxed.

"With regard to the falling incidence rates, we should proceed in stages: in a first step, the mask requirement outside can basically be abolished," Spahn, a member of Chancellor Angela Merkel's center-right Christian Democrats, told Germany's Funke Media Group on Monday.

"In regions with a very low incidence rate and a high vaccination rate, the same could be done gradually indoors also," he added.

Justice Minister Christine Lambrecht, from junior coalition partner the Social Democratic Party (SPD), on Sunday said the leaders of Germany's 16 states should clarify "whether and where a mask requirement is still proportionate if the incidence figures are low and continue to fall."

Paintings about the pandemic by children from around the world

Lambrecht said this was especially the case for schools, with schoolchildren particularly affected by the face mask requirement.

Her fellow SPD lawmaker Karl Lauterbach — a trained epidemiologist and his party's health spokesman — added his voice to those calling for a mask rethink on Monday, at least when it came to outdoor areas.

"The mask obligation in the outdoor area is actually, at this point in time, with the low incidence for many areas, not sensible anymore, it's no longer necessary," Lauterbach told German broadcaster ZDF.

However, Lauterbach disagreed that there should be a removal of the mask rule for indoor public areas — including schools.

Only when some 70% percent of adults were fully vaccinated, a statistic approaching herd immunity, would there be no need for mandatory mask-wearing inside buildings, he said.

Germany's neighbor Denmark lifted rules for mandatory face-coverings in almost all public spaces on Monday. Both the government and most parliamentary parties agreed to lift the rules, which have been in place for months.

DW drawing competition: The pandemic as seen through the eyes of children

How are the world's young people coping with the pandemic? How does COVID-19 affect the everyday life of your children?