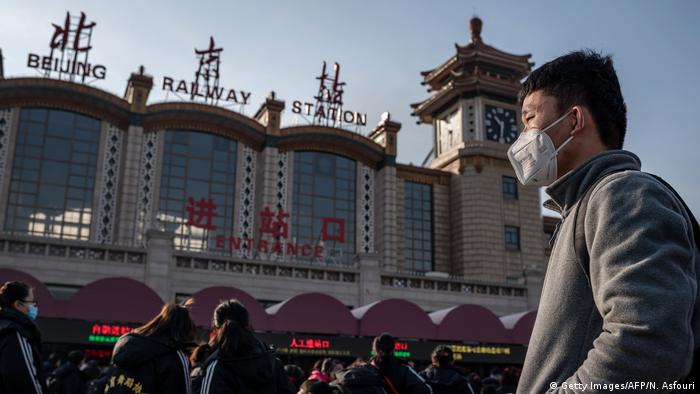 The victim, an 80-year-old Chinese tourist, and his daughter had been receiving treatment at Paris's Bichat hospital since January 25 and were subject to strict isolation measures, said Buzyn in a statement.

The daughter's health is not a cause for concern and she should be able to leave hospital soon, added the minister. Both individuals were from Hubei province, the epicenter of the outbreak.

World Health Organization (WHO) emergency chief Mike Ryan told DW on the sidelines of the Munich Security Conference that the virus is still not spreading fast internationally.

"The virus has been outside China now for a number of weeks and we still have only got just over 500 cases in 24 countries, and those countries are significantly containing the virus."

He added that countries may not be able to slow it down entirely and it may take the development of vaccines to finally stop the disease.

Only three deaths had been recorded from the virus outside of China — in the Philippines, Hong Kong and Japan. France has 11 cases of the virus.

Beijing, meanwhile, announced new strict rules for returnees in the capital's latest bid to contain the virus. Anyone returning to the city will be subject to a 14-day quarantine or risk punishment, ordered its virus prevention working group late on Friday.

The working group warned there will be legal consequences for those who do not comply with the self-imposed 14-day quarantine. It did not elaborate on how the isolation will be enforced or what the punishment would be.

Chinese officials are concerned that COVID-19 may spread further as migrants return to their jobs in cities or other provinces after a prolonged Lunar New Year holiday.

The latest attempt to stop the spread of the virus came as the global death toll on Saturday reached 1,527 and China reported that 143 more people had died.

Beijing reported 2,461 new infections of the COVID-19 strain, a sharp drop from the 5,090 new cases reported the previous day.

World Health Organization Director-General Tedros Adhanom Ghebreyesus told the Munich Security Conference on Saturday that the outbreak was still an emergency for China and it was impossible to predict where it may spread.

He said he was encouraged by China's containment measures but that the increasing number of cases was still a cause for concern.

This week saw the scale of the epidemic increase significantly after authorities in Hubei province changed their criteria for qualifying cases.

Patients "clinically diagnosed" through lung imaging are now included, in addition to those that have shown up positive after laboratory analysis, adding thousands of new patients to Hubei's infection figures.

Cause for celebration on Cambodia cruise ship

More than half the passengers on a luxury cruise finally got to disembark on Saturday at a Cambodian port after the ship was turned away from the Philippines, Taiwan, Japan, South Korea and Thailand due to fears about the virus.

A Cambodian official announced the development, saying that the decision was made after tests on 20 people came back negative. The official added that the people had been tested "out of an abundance of caution."

An 83-year-old American passenger later tested positive to the virus after undergoing a test in Malaysia. The Malaysian Health Ministry said the woman was in a stable condition, and that her husband had also shown symptoms but had tested negative. The ministry added that the couple were the only individuals among the 145 passengers who flew onward to Malaysia to show symptoms,

Most of the 1,200 people who disembarked from the ship at the Sihanoukville port were intending to head to the capital for further travel, said a government spokesperson.

Meanwhile, the German cruise ship "Aidavita"  docked at Laem Chabang port in Thailand on Saturday morning, after being turned away from Vietnam due to fears that those on board may have the virus. The 1,100 passengers, mostly from Germany, and 400 crew members are expected to be able to leave the ship on Sunday morning.

There were no suspicious cases aboard the ship, the ship's company spokesman said in a statement. No guest or crew member on board had been to China within the last 14 days.

Egypt has confirmed its first case of coronavirus, also the first known infection on the continent of Africa. The patient — who is not from Egypt — did not show any symptoms of being ill. (14.02.2020)

The world's largest courier company has said it will halt package deliveries to China for logistical reasons. The coronavirus that emerged in central China at the end of last year has now killed almost 1,400 people. (15.02.2020)