Expats in Africa are fearing that they will be attacked over the spread of COVID-19. Europeans and Americans are leaving, and others are thinking about it as accusations that they brought the virus to Africa circulate. Ulrike Müller booked a very expensive flight to Germany when Burkina Faso recorded 33 cases of coronavirus disease (COVID-19) on March 19. The French-German has been living and working in the capital Ouagadougou for many years, after a long spell in neighboring Ghana. The decision to return home was hard, Müller told DW.

"We don't know yet how serious it is going to get. If the people cannot live their lives anymore because everything completely falls apart, then I really don't know what will happen."

The pregnant mother of two has one more fear: mob justice. As the coronavirus began to spread in Africa — via inbound international flights — at the end of February, so too did the animosity towards Western expats.

Europeans, Americans and Scandinavians who live and work on the continent are acutely aware that mob justice is not unheard of in Africa. "It is important for me to leave here as fast as I can before it gets very bad in this country like in Italy," said Müller.

Cameroon and Ethiopia have reported cases of verbal attacks on light-skinned people.

On March 19, the US Embassy in Yaounde issued a travel warning to US citizens in the wake of what it said was "a rise of anti-foreigner sentiment revolving around the announcement of the spread of COVID-19."

"Reports include verbal and online harassment, stone throwing, and banging on vehicles occupied by expatriates," the travel warning reads. To date, most of the hundreds of confirmed COVID-19 cases in Africa involve people who have recently traveled to places such as Italy, France or Germany, highy affected by the outbreak that was first reported in China. Only a few cases of transmission of the virus from local to local have been confirmed in Africa.

"You need to really consider the neighborhood in which you live as a European because many here believe we brought the virus. And it is not a baseless accusation," said Müller.

Even though Burkinabes are "very friendly people," she thinks that attacks on foreigners "could happen if things begin to get worse for the people."

However, Müller stressed that the overriding reason for her departure from Burkina Faso, is to ensure she has access to proper medical services if she catches the virus.

The Ethiopian government has issued a stark warning to citizens, calling on them to refrain from attacking foreigners. "The virus is not related to any country or nationality," Prime Minister Abiy Ahmed wrote.

"Prevention efforts need not be a barrier to our humanity and disposition for compassion. As a global community, we are each other's keepers. Let us not let fear rob us of our humanity," according to the 2019 Nobel Peace laureate. 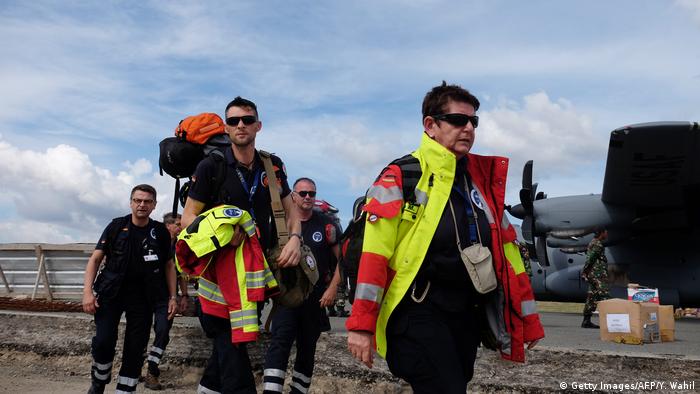 The German government set aside €50 million to repatriate its citizens

Several countries on the continent have taken drastic measures to slow the spread of the virus. Borders have shut, travel bans have come into effect, and strict testing and quarantine regulations now apply.

Many of the regulations are geared towards travelers from Italy, Germany, China, Iran and the United States. South Africa's President Cyril Ramaphosa declared a national state of disaster and revoked the visas of some 8,000 Chinese nationals, more than 400 Iranian nationals.

Kenya went a step further and blocked everyone except citizens and residents from entering the country. In Zimbabwe, Defense Minister Oppah Muchinguri said the "coronavirus is the work of God punishing countries who imposed sanctions on us."

The European Union (EU) and the US maintained sanctions on Zimbabwe after Robert Mugabe was ousted as president.

In Ghana, a few expats told DW's Chrispin Mwakideu that they were subjected to verbal abuse on the streets of the capital Accra. "A German colleague said she was kicked off a motorbike taxi because she coughed," said Mwakideu.

On social media platforms too, there is hate speech directed at Europeans and Americans in particular. DW read a number of offensive posts on Facebook and Twitter.

The case of his German colleague in Accra was not isolated one, said Mwakideu. "Many expats have reduced their outdoor activities because of the fear of spreading the virus and in case that they have it and are concerned about mob attacks."

Ulrike Müller thinks it is a matter of when, and not if, such attacks will begin. "I don't have acute angst but I can foresee it happening anytime soon."

Deaths from the coronavirus across Spain have surged 30% in the past 24 hours. Italy plans to extend its nationwide lockdown, as India urges its nearly 1.4 billion people to stay inside. Follow DW for the latest. (19.03.2020)

Germany's state and federal leaders are yet to decide on whether to impose a nationwide coronavirus lockdown. Bavaria has introduced drastic measures of its own, but other states have also edged closer to curfews. (20.03.2020)

More than 10,000 people have died from the coronavirus outbreak worldwide, according to the latest figures. Bavaria has announced a statewide lockdown. Follow DW for the latest. (20.03.2020)