With more people working from home and shops and restaurants closed, traffic fatalities plummeted in 2020. Still, lack of adequate bicycle infrastructure led to an increase in cyclist injuries and fatalities. 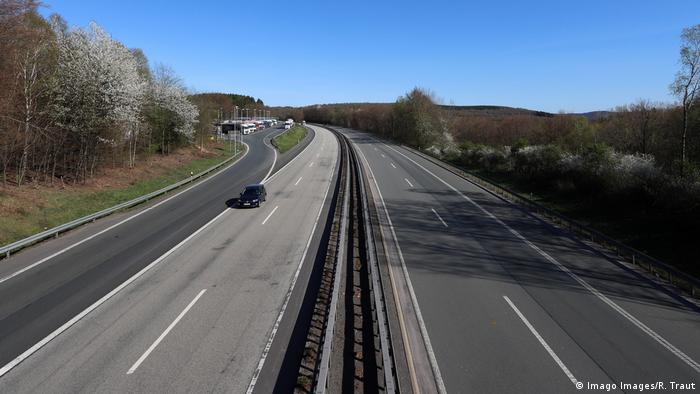 Germany's Federal Statistical Office announced on Friday that traffic fatalities in the country in 2020 were considerably lower than the year prior due to the impact of the coronavirus pandemic on traveling. Police recorded a total of 2.1 million traffic accidents in the period between January and November 2020, down 15.5% from the previous year.

The Statistical Office says the decrease can be traced directly to the impact of the coronavirus pandemic on daily life. With more people working from home, as well as the closing of shops and restaurants, far fewer people were on the roads.

Is the coronavirus crisis turning London into a bicycle city?

One group, however, saw a dramatic spike in traffic accidents, namely cyclists. Though statistics only covered the period from January to October, insurance investigators say the number of accidents (11,228) was significantly higher than during that same period in the year prior (9,102).

Analysts say the trend can be traced to more people, especially those who would normally use public transportation, traveling by bicycle. Increased bicycle traffic also exacerbated a systemic traffic problem — a lack of adequate infrastructure, such as bike lanes and extra traffic lights for cyclists.

Accident researcher Siegfried Brockman told the German news agency DPA, "Local governments have begun to signal their willingness to address the problem but have been slow to implement improvements." Brockman says that as the pandemic drags on, overall traffic fatalities may remain low again in 2021, but he warns "the opposite could happen as soon as people regain their freedom of movement and start heading out in greater numbers."

In a separate announcement related to the coronavirus' effect on German society, the Bundesbank, Germany's central bank, announced that although more counterfeit euro banknotes were in circulation in 2020 than in 2019, the economic damage was far less.

Bundesbank Chairman Johannes Beermann said the trend "is tied to the fact that households reduced overall spending in 2020, and had far fewer opportunities to use cash, for instance in restaurants or at Christmas markets."

Whereas counterfeiters caused some €3.3 million ($4.02 million) in economic damages in 2019, the total for 2020 dropped to €2.9 million. The bank confiscated a total of 58,800 fake bills, 6.5% more than in 2019. Authorities say that as the pandemic dragged on, counterfeiters had increasing difficulty getting their bills into circulation. In the first half of the year some 34,100 counterfeit bills were confiscated, but only 24,700 were secured in the second half.

The European Central Bank (ECB) noted a similar Europe-wide trend. The ECB says it withdrew roughly 460,000 fake euro banknotes from circulation in 2020, 17.7% fewer than in 2019 and a record low. The ECB says about 94.5% of the counterfeit bills it secured had been in circulation in the eurozone, with another 2.8% secured in non-eurozone EU states and another 2.7% in non-EU countries.