A group of wealthy countries have already secured the majority of promised stock of vaccines, a new study shows. Elsewhere, the pandemic leads to increased discrimination in Asia. DW wraps up the latest developments. 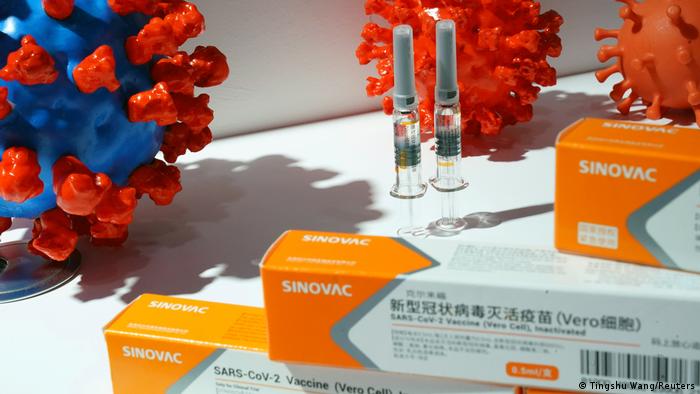 Rich nations have already bought up half of the promised COVID-19 vaccines, according to a report from Oxfam. The countries represent just 13% of the global population, but have dominated orders from big pharma companies for a potential vaccine, the report found.

Oxfam said that the five leading vaccine candidates that are in late-stage trials will be able to supply 5.9 billion doses, enough to inoculate about three billion people.

About 51% of these have been preemptively bought by countries and regions including the United States, Britain, the European Union, Australia, Hong Kong and Macau, Japan, Switzerland and Israel. The remaining 2.6 billion have been bought by or promised to developing countries including India, Bangladesh, China, Brazil, Indonesia and Mexico.

Here are the major coronavirus developments from across the world on Thursday:

UK: A shortage of lab capacity is hampering efforts to roll out widespread COVID-19 testing, according to Junior British Health Minister Edward Argar. He said the UK government will soon announce a system to ration testing, prioritising frontline health workers and carers. He said the country can hopefully avoid a second lockdown if people obey guidelines such as meeting with a maximum of six people.

Germany: Prosecutors are reportedly investigating more than 10,000 cases of fraudulent access to coronavirus emergency aid and other allegations of fraud in connection with the pandemic. The estimated damages amount to several million euros and the investigation will last well into next year, according to Redaktionsnetzwerks Deutschland.

An additional 2,194 people were confirmed to have been infected on Thursday, bringing the total number of cases to 265,857, according to the Robert Koch Institute. Another three people died, bringing the confirmed death toll to 9,371.

Three more European capitals and several regions have been added to Germany's catalogue of "risk areas'' for coronavirus. Vienna, Budapest and the Dutch region that includes Amsterdam were added to the high-risk list due to increased numbers of infections. Also added were several regions in France, Romania, Croatia, Switzerland and the Czech Republic. Travelers coming from those areas must go into mandatory quarantine and take a coronavirus test.

Israel: Jewish Israelis were preparing to celebrate Rosh Hashanah as they faced a second nationwide lockdown. Just hours before the Jewish New Year is set to roll in, Israelis will enter another three-week lockdown. Daily confirmed cases have topped 5,000 in recent weeks, one of the highest per capita infection rates in the world.

Oxygen supplies have become unreliable in the country, with the major states of Maharashtra, Gujarat and Uttar Pradesh saying demand for oxygen has more than tripled.

Australia: The lowest one-day rise in new cases in nearly three months was reported on Thursday as states said restrictions will soon be relaxed. There were 35 confirmed cases across the country on Thursday, the lowest since June 24. Most were reported in the state of Victoria, which has largely been in strict lock down for more than six weeks.

State carrier Qantas Airways said a seven-hour scenic flight over Australia's Outback and Great Barrier Reef sold out in 10 minutes. International and even state borders have effectively been sealed shut, prompting the airline to join a growing trend in Asia of "flights to nowhere."

Discrimination: The coronavirus pandemic has led to new levels of discrimination against vulnerable communities in Asia, the International Federation of Red Cross and Red Crescent Societies (IFRC) warned on Thursday.

"It is particularly concerning that both national migrant and foreign workers are blamed for the spread of COVID-19 as they are quite vulnerable already," researcher Dr Viviane Fluck told Reuters news agency.

She said there should be more focus on combating "rumors that are linked to underlying power dynamics and structural issues of inequality."

US: The US government has outlined its plans to make free vaccines available to all Americans when it is proven safe and effective. However, the plan immediately provoked conflict between US President Donald Trump and a senior health official over a realistic timeline.

A vaccination program is due to begin either later in 2020 or in January 2021, eventually including any US citizen who wants a vaccine, according to a report to Congress and an accompanying "playbook" for states and localities, federal health agencies and the Defense Department.

Trump claimed that a vaccine could be three to four weeks away, however the Director of the Centers for Disease Control and Prevention Robert Redfield told Congress on Wednesday that it would take six to nine months after any shot's approval to distribute it nationally, with it intially being reserved for first responders and the people most vulnerable to COVID-19. He said the vaccine wouldn't be available until the spring or summer of 2021 at the earliest.

Trump later said: "I believe he was confused," referring to Redfield. "I think he just made a mistake."

More than 150 million children have been pushed into poverty due to the pandemic, according to a new report from UNICEF and Save the Children on Thursday. There has been a 15% increase in the number of children living in deprivation in low and middle-income nations since the start of the pandemic.

Chinese vaccine maker Sinovac Biotech has announced plans for a clinical trial of its experimental vaccine with children and adolescents later this month. The vaccine is already in the final stage of testing with adults.

The head of the US Centers for Disease Control said there would be enough doses of a coronavirus vaccine by the middle of 2021 to allow the US to get back to normality. See US update for more details.

Rich nations have already bought up half of the promised COVID-19 vaccines, according to a report from Oxfam. See opening paragraphs for more details.

'This is the moment for the EU to lead the way,' says EU chief Ursula von der Leyen

In her first speech on the state of the EU, Ursula von der Leyen said the bloc should significantly increase its emissions-cutting targets. She also unveiled a plan to reboot Europe's economy amid the coronavirus crisis.

Authorities are holding final year exams despite students' protests. A worsening coronavirus crisis in the country has put the students' lives at risk, with many of them having to travel to other cities to take exams.