The tightest restrictions will remain in place in the country's largest city, Auckland, however. Meanwhile, a new Vietnamese school year has started with most students still in a virtual classroom. DW has the latest. 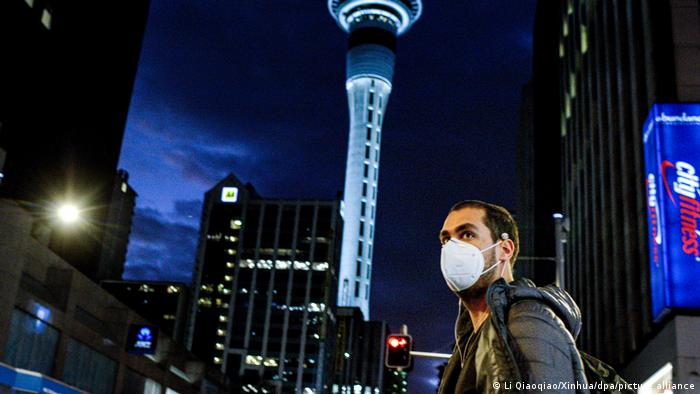 New Zealand is lifting a strict coronavirus lockdown this week. Three million people will no longer be under stay-at-home orders as of Tuesday.

On Monday, Prime Minister Jacinda Ardern said there had been positive progress in stemming a delta-variant fueled outbreak that emerged late last month. Schools will reopen Thursday for the first time in three weeks.

Ardern added that Auckland will remain under a hard lockdown for at least another week. The city of 2 million people is where the current outbreak began and has not yet been contained.

Although stay-at-home orders will be lifted outside of Auckland, social gatherings will be limited to 50 people, mask mandates will remain in place and app-based contact tracing will be used in many public venues.

"We've done so well to bringing this outbreak under control, level four [hard lockdown] restrictions are working but the job is not done," she said. "We're within sight of elimination but we can't drop the ball."

Four Argentina soccer players are being investigated by Brazil federal police for allegedly providing false information upon arrival in Sao Paulo ahead of Sunday's World Cup qualifier between the two nations.

The match was brought to an abrupt end just seven minutes after kickoff when agents of Brazil's health agency, Anvisa, insisted they apprehend England-based players Emiliano Martinez, Emiliano Buendia, Giovanni Lo Celso, and Cristian Romero, so they could be escorted to the airport over breaching coronavirus quarantine rules.

Anvisa said Argentinian soccer officials knew since Saturday that the four players, three of whom started the match, should not be involved because they were in the United Kingdom 14 days before their arrival, and that the quartet had not informed authorities as required. Visitors from the UK must undergo a mandatory 14-day hotel quarantine after arriving in Brazil, according to the South American country's COVID protocols.

Health authorities in Chile have approved the use of the Sinovac vaccine for children aged six and older. Chile is the first Latin American country to make such an approval.

The country's Health Ministry still has to decide when to begin the vaccination process.

Monday's approval comes as the South American nation has fully immunized more than three-fourths of its adult population.

Members of the G-20 concluded a two-day meeting in Rome, Italy on Monday, where they discussed global vaccine distribution. Italy currently holds the rotating presidency of the G-20.

"There is a political commitment to distribute vaccines to the whole world," Speranza told the media.

Meanwhile, more than 61% of the German population is fully vaccinated against the coronavirus, the Robert Koch Institute reported Monday.

German health officials are currently pushing for increased vaccinations in September as the fall and winter approaches.

Health Minister Jens Spahn tweeted Monday that the number of people who had received their first shot over the weekend was still too low.

Government spokesman Steffen Seibert on Monday called for a Germany-wide vaccination drive next week to give vaccinations an "important push" in the right direction.

Compared with 2019, meanwhile, nationwide life expectancy for people born in 2020 dropped by 1.2 years.

"In 2020, the spread of the COVID-19 pandemic and the sharp increase in the risk of mortality that derived from it abruptly interrupted the increase of life expectancy at birth that had marked a trend up to 2019," said ISTAT, Italy's national statistics bureau.

The school year in Vietnam started Monday amid widespread COVID lockdowns to contain an ongoing virus surge brought on by the delta variant and lagging vaccinations.

Around 23 million Vietnamese students will start school this year in virtual classrooms. Live classes have mostly been shut down since April, and in some harder-hit provinces, schools have been converted into quarantine facilities and field hospitals.

Only 3.3% of Vietnam's 98 million inhabitants have been fully vaccinated, and 15.4% have received at least one shot. In the latest wave of the virus, Vietnam has reported 520,000 confirmed cases and over 13,000 deaths. Ho Chi Minh City, with a population of 10 million, accounts for most of the toll.

Vietnam in lockdown due to skyrocketing cases

Health officials in South Korea said Monday they are concerned about a spike COVID cases during the "Chuseok" holiday season later in September, during which millions of people travel around the country to visit family.

The vast majority of the new cases have been reported in the Seoul metropolitan area.

The Philippines will lift a stay-at-home order in the capital, Manila, despite a surge in new cases. The move is part of an effort to implement "granular lockdowns," or those just applying to small areas deemed at-risk.

The lighter restrictions in the national capital region, which accounts for about a third of the country's economy, will enable many hard-hit businesses to reopen and spur local tourism. The country has recorded over 2 million infections and 34,000 deaths.

India intends to increase its medical oxygen capacity to 15,000 tons per day ahead of a potential third wave of coronavirus cases.

Moloy Banerjee, the head of the Linde South Asia industrial gases firm, said the Indian government is aiming for 15,000 tons of oxygen per day, an increase from the nearly 10,000 tons per day used during the peak of the second coronavirus wave earlier this year.

Linde is one of India's top medical oxygen suppliers.