The restrictions in New Zealand's largest city aim to eliminate an outbreak of the delta variant. Meanwhile, Germany has launched a vaccination push. DW has the latest. 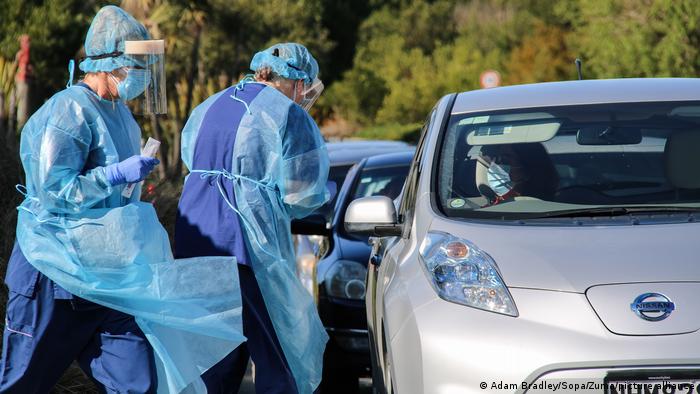 New Zealand had imposed a nationwide lockdown on August 17 when the first infection from the delta variant was detected in the community.

New Zealand on Monday extended a coronavirus lockdown in its largest city of Auckland for at least another week as the country struggles to contain an outbreak of the contagious delta variant.

Prime Minister Jacinda Ardern said the city’s 2 million residents were required to follow stay-at-home orders due to the emergence of several "mystery cases" which have not been linked so far to any existing clusters.

"These cases are still coming through and the fact we're finding them through surveillance and community testing, rather than contact tracing, is what we're concerned about," she said.

New Zealand had imposed a nationwide lockdown on August 17 when the first infection from the delta variant was detected in the community.

On Monday, there were 33 new cases of local transmission in Auckland and Ardern said she was cautious about easing curbs too early.

"(Case) numbers are rumbling along and this has been evident in the last three days," she said.

"This doesn't mean our collective efforts in Auckland are not making a difference."

Germany's nationwide vaccination action week began on Monday, aimed at increasing the rate of vaccinations ahead of winter.

Aside from the usual places where the jabs are offered, anyone can get their vaccine dose without an appointment and free of cost in locations across the country — ranging from libraries to shopping centers and mosques.

Vaccines are being administered at volunteer fire brigade stations, in trams, and at the edge of football fields.

With 62.2% of the population fully vaccinated, health officials have urged Germans to get their shots in order to reach the 90% mark.

Speaking to German radio station WDR 5, Health Minister Jens Spahn said: "There are still those who actually have nothing against vaccination, who may even have already had an appointment, they missed it and they just didn't not made another one."

United Kingdom health chiefs have said that children between the ages of 12 to 15 should receive vaccinations.

England’s Chief Medical Officer Chris Whitty along with health bosses in Scotland, Wales and Northern Ireland have given the ok for age group to get inoculated.

It’s hoped the widespread vaccination plan will curb the need for future restrictions.

Meanwhile a new report published by peer-reviewed medical journal, The Lancet, says there is no need to be given third doses of vaccines, at this stage.

According to the paper two shots are effective at preventing severe COVID-19 infection.

The World Health Organization has been pushing for countries to halt giving booster jabs while millions of people in poorer countries have yet to receive a single dose.

In Australia, the COVID-19 inoculation campaign is being expanded on Monday to include 1 million children in the 12-15 age group.

The move comes as the country secures additional doses in an attempt to boost its vaccine roll-out amid a surge in the caseload.

In the United States’ largest test of in-person learning during the COVID-19 pandemic, classroom doors have been opened for nearly a million New York City public school students

The start of the school years comes amid vaccine mandates aimed at pandemic recovery.

On Monday, almost all of the city’s 300,000 employees will be required to return to their workplaces in person.

The employees would either need to be vaccinated or would be required to undergo weekly coronavirus testing to remain in their jobs.

UN children's agency UNICEF said Sunday that Iraq was sent over 100,000 doses of AstraZeneca vaccine from Italy through the COVAX sharing program.

More than 4 million Iraqis have received at least one dose of the vaccine, about 10% of the population.

Iraq's healthcare system has struggled to cope with the pandemic, with the country experiencing both shortages of medicines and qualified doctors. Several fires have also occurred this year at coronavirus wards in Iraqi hospitals, with angry citizens pointing fingers at government mismanagement and corruption over the tragedies.

Bangladesh on Sunday reopened schools after nearly 1-1/2 years, with hundreds of thousands of students returning to class in person.

Schools were shut down on March 17 of last year after the South Asian country discovered its first cases of the virus. Government officials have decided to reopen education facilities because most teachers and staff are fully vaccinated.

Indonesia has decided to begin easing COVID-19 restrictions on the popular tourist island of Bali.

That’s according to the country’s Maritime and Investment Minister Luhut Pamjaitan. The minister made the announcement at a virtual conference on Monday, and said the restrictions would be evaluated on a week by week basis.