Joe Biden and Kamala Harris cut solemn figures as they remembered those who have died due to COVID-19. The United States has recorded more than 400,000 coronavirus deaths. Follow DW for the latest. 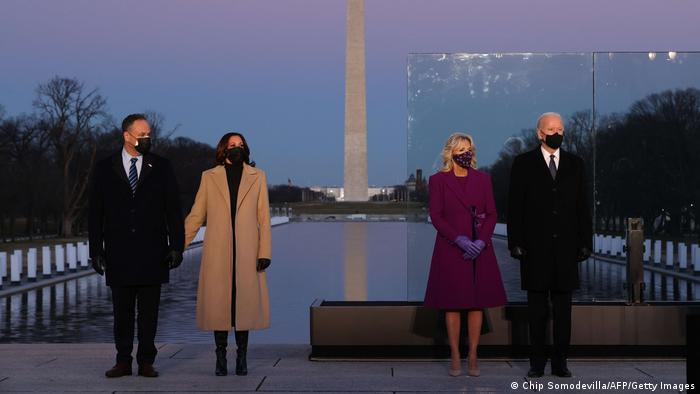 Joe Biden and Kamala Harris, along with their partners, remember those who have lost their lives from the novel coronavirus

On the eve of his inauguration as US president, Joe Biden took part in a ceremony near the Lincoln Memorial in Washington to remember the 400,000 people who lost their lives due to COVID-19.

With Vice President-elect Kamala Harris also in attendance, the coronavirus victims were represented by 400 lights placed around the reflecting pool as the bell at the Washington National Cathedral tolled 400 times. 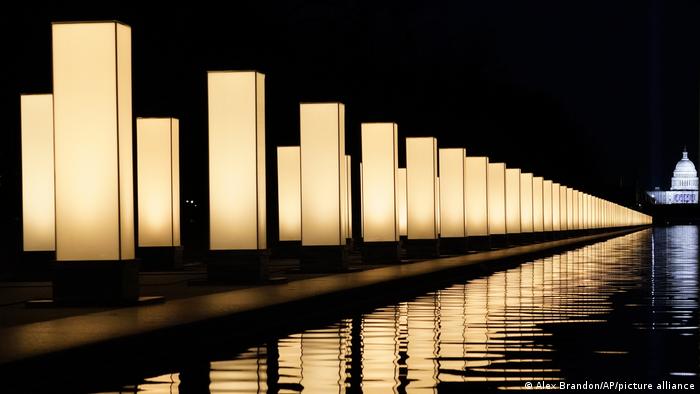 Lincoln Memorial Reflecting Pool lit as a memorial to COVID-19 victims, with the Capitol Building providing the backdrop

Other cities around the United States held tributes too. The Empire State Building in New York was lit with red lights that pulsed, mirroring a heartbeat.

In Salt Lake City, the bells at the Utah Capitol were set to ring 15 times in honor of the more than 1,500 lives lost to COVID-19 in the state.

The US death toll accounts for nearly 1 in every 5 virus fatalities registered worldwide.

The World Health Organization has warned that medical resources in parts of North and South America are being stretched to the limit by the rising number of infections across the continent.

"Throughout our region, especially in North and South America, many hospitals are operating at or very close to capacity," said Clarissa Etienne, director of the Pan American Health Organization (PAHO).

Mexico is investigating the theft of four coronavirus vaccine doses from a public hospital. The country has deployed the military to guard the vaccines and prevent them falling into criminals' hands but it didn't appear to prevent this "dishonest act" that could have been committed out of "self-interest by a member of the hospital's vaccination team," the army said in a statement.

Canada won't be receiving any BioNTech-Pfizer coronavirus vaccines next week, and 50% fewer than expected over the next month, according to officials. Pfizer said last week it would slow manufacturing in late January and early February because of changes in production processes, resulting in a supply shortage for Canada and EU countries.

Monitoring the spread of coronavirus variants

German Health Minister Jens Spahn has expressed anger over the delay of COVID-19 vaccine delivery by BioNTech-Pfizer, saying it could complicate efforts to vaccinate people in the country.

"We can only vaccinate with that which has been delivered," Spahn said.

On Friday, the German Health Ministry said it was informed it and other EU nations would temporarily see reduced deliveries of the BioNTech-Pfizer COVID-19 vaccine due to construction work at its plant in the Belgian town of Puurs.

Meanwhile, the number of confirmed cases in Germany increased by 15,974 to 2,068,002, while the reported death toll rose by 1,148 to 48,770, according to data from the Robert Koch Institute for infectious diseases.

The Dutch government is set to impose a curfew to limit the spread of coronavirus – the country's first nationwide curfew since World War II, broadcaster RTL said.

People will be allowed to leave their homes only for pressing needs between 8:30 p.m. and 4:30 a.m. as of Friday night.

Schools and non-essential shops have already been closed since mid-December, following the shutdown of bars and restaurants two months earlier.

The Vatican has started offering free coronavirus vaccinations to Rome's homeless people. The vaccination drive was overseen by Cardinal Konrad Krajewski, the Polish head of the papal charities office.

A statement by the Vatican on Wednesday said that about 25 homeless people received the first vaccine dose, and more groups would be vaccinated in the coming days.

Last week, both Pope Francis, 84, and ex-Pope Benedict, 93, received their first COVID vaccine dose. Francis has urged people that everyone should get a jab.

"It is an ethical choice because you are gambling with your health, with your life, but you are also gambling with the lives of others," he told Italy's Canale 5 TV station.

The highly contagious variant first found in the UK has been detected in at least 60 countries, the World Health Organization said.

The UK variant, first detected in mid-December, is thought by the WHO to be between 50% and 70% more infectious than the original.

Countries across the world are taking new measures to slow the rate of infection amid the growing presence of new and more infectious variants of the virus. The South African variant, which, like the UK variant, is also believed to be more contagious, has now been reported in 23 countries and territories, the WHO added.

While more transmissible, the two variants are not thought to be more deadly, and Pfizer and German partner BioNTech have said their vaccines are effective against the mutation found on the British virus variant, known as B117.

The Tokyo Olympics are "unlikely" to go ahead, according to a senior official from the London 2012 Games. Keith Mills, who was deputy chairman of the London 2012 organizing committee, said Olympic officials should be making plans to cancel, particularly as Tokyo and other parts of Japan are currently under a state of emergency to quell a surge in infections. Polls indicate that public support for the Games has plummeted.

The number of North Koreans defecting to South Korea dropped significantly in 2020 after Pyongyang closed its border due to the pandemic, Seoul's unification ministry has revealed.

The figure has been falling steadily for some time but slumped to just 229 last year, the ministry said, far below the 1,047 of 2019.

When Germany's foreign minister met with his Turkish counterpart, DW published photographs of them with and without masks. Some thought that revealed a conspiracy.

In COVID-19 times, masks are mandatory in many places. After Bavaria, now also other German states are tightening regulations. A simple cloth mask is not enough: mouth coverings must be better, but what does that mean?