The UK variant has brought a new surge in infections. Meanwhile, Indonesia has become the latest country to halt the use of the AstraZeneca vaccine. Follow DW for the latest. 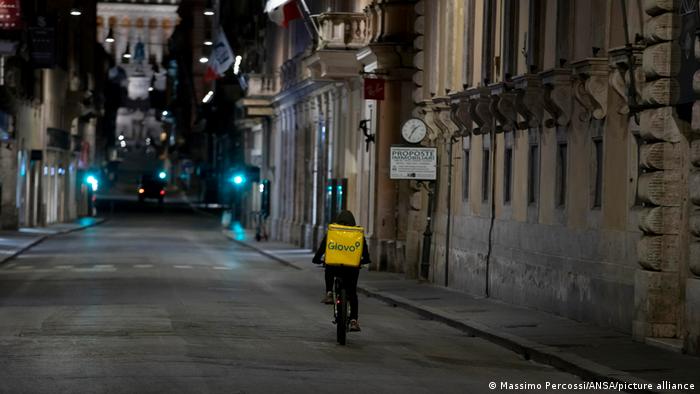 Coronavirus restrictions were reimposed over three-quarters of the Italian peninsula, including Rome and Milan, on Monday as the country battles outbreaks of the variant first discovered in the UK.

Health Minister Roberto Speranza said on Sunday that the government was hopeful the new measures, alongside the ongoing vaccination program, would make the way for loosening of restrictions later.

Schools, shops, restaurants and museums will be closed until April 6.

According to the new rules, a red alert will be called in any region where the infection rate rises above 250 per 100,000 in the previous seven days, at which point the restrictions will automatically be imposed. A red alert has already been fixed for the whole country over the Easter weekend.

"Each dose of vaccine injected is a step in the direction of the way out of the crisis," Speranza said.

Neighboring France was also weighing up a possible return to lockdown in the face of rising infections. Hospitals in Paris are running out of intensive care beds.

According to Our World in Data, run by Oxford University, Italy recorded over 22,000 new COVID-19 cases on Saturday. That is almost double the number of daily cases recorded in mid-February.

Germany joined its northern neighbors, and a growing list of countries nationally, in temporarily halting its use of the AstraZeneca COVID-19 vaccine.

The Danish Medicines Agency reported late on Sunday that the woman who died from a blood clot after receiving the AstraZeneca vaccine had "highly unusual" symptoms.

Denmark is one of the countries to pause its use of the AstraZeneca COVID-19 vaccine following reports of people developing blood clots.

Dutch regulators said on Monday that they had reported 10 problematic instances after people had received the AstraZeneca vaccine. The Dutch government also decided to temporarily stop using the vaccine.

The developers of Russia's Sputnik V COVID-19 vaccine said on Monday that they had reached an agreement with companies from German, Italy, Spain and France to produce doses of the vaccine.

The European Medical Agency is currently running a rolling review of the Sputnik V vaccine as they deliberate whether to grant official approval. Hungary, Slovakia and Czech Republic have already ordered doses.

The Lancet medical journal published results last month of fast-tracked clinical trials showing the vaccine to be 90% effective against the virus.

Russia said on Monday that it had already fully vaccinated 3.5 million people with the two doses of the Sputnik V vaccine.

The Cambridge professor said that COVID-19 mutates on average once every two weeks and that immunity from vaccines does not last forever, making constant tweaking of the vaccine a necessity.

British researchers from the London School of Hygiene and Tropical Medicine published the results from a study on Monday showing the B.1.1.7 COVID-19 variant first discovered in the UK is 55% deadlier than the original virus.

New York City held a virtual memorial service on Sunday for the 30,258 people who have died from coronavirus in the year since the pandemic began.

No other city in the US has suffered as many deaths. Mayor Bill de Blasio said that there had been "more New Yorkers lost than in World War Two, Vietnam, Hurricane Sandy and 9/11 put together."

Black and white photos of those who had died were projected onto the Brooklyn Bridge.

US President Joe Biden is set to announce Gene Sperling to manage the implementation of the $1.9 trillion (€1.6 trillion) COVID-19 relief plan, an administration official said on Sunday.

Sperling has worked as an economic advisor to both Barack Obama and Bill Clinton.

Authorities in Pakistan's Punjab province — the country's largest — have imposed a partial "smart" lockdown in certain hotspots as the region is gripped by a third wave of coronavirus infections.

Officials in the capital, Islamabad, told residents to wear face masks and ensure social distancing in public. The country has recorded a total of 605,200 cases and 13,508 deaths since the pandemic began.

Thailand said on Monday that it would return to using the AstraZeneca vaccine on Tuesday after the country joined others in temporarily suspending its use over safety concerns.

Officials said that the prime minister and his cabinet would be the first to receive the vaccine.

Indonesia joined a growing list of countries that have temporarily halted their use of the AstraZeneca COVID-19 vaccine after reports of blood clots in people who had received the jab. The World Health Organization and the European Medicines Agency have both said that there is no proven link between the vaccine and the blood clots.